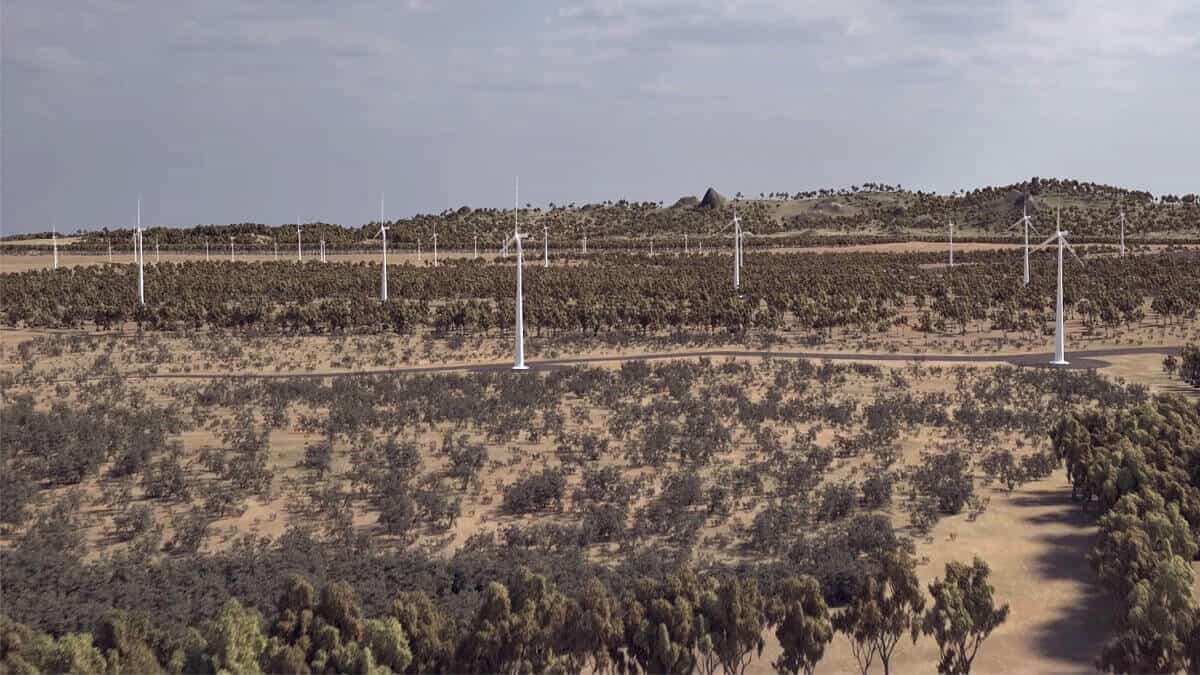 An artist’s impression of the Nordex Delta N163/5.X turbines on a sheep farm at the MacIntyre Wind Farm site.

Giant turbines, a giant land area and huge aspirations, that’s the plans for the largest onshore wind farm in the southern hemisphere, now under construction on the Southern Downs in Queensland.

As the concrete is being poured for the foundations of Australia’s largest wind farm, the project backers say they are at the “start of a golden age of renewable energy in Australia.”

The brief for the $2 billion MacIntyre Wind Farm precinct is big, and it lives up to it in every way.

The precinct 200km south-west of Brisbane in Queensland, will cover 36,000ha with 180 turbines spanning predominantly sheep and cattle farming land to produce 1,026MW of electricity, enough to power nearly 700,000 homes.

Each of the 180 Nordex Delta N163/5.X turbines will be up to 230m tall (to the tip of the highest blade), about the height of the World Tower in Sydney, or Heron Tower in London.

Each of the three blades on each turbine weigh 26.6 tonnes and are 80m long – close to the size of three blue whales end-to-end. ACCIONA notes it would take Usain Bolt 23 seconds to run from the base of the tower to the tip of a blade.

“I believe MacIntyre is the start of a golden age of renewable energy in Australia,” he said at the start of construction for the project. “One that takes full advantage of our renewable resources with projects that help drive and develop our regional economies.

“MacIntyre is the largest project ACCIONA Energía has undertaken anywhere in the world and will be our flagship development for many years to come. The precinct demonstrates that large-scale renewable energy projects can create hundreds of jobs, bring in billions of new investment and create new economic foundations in regional towns.”

Acciona is a Spanish industrial conglomerate with assets of more than $22b and 38,000 staff.

Among the statistics quoted for the project is the claim it will offset about three million tonnes of CO2 emissions every year – the equivalent of keeping 633,000 cars off the road.

“It shows that renewable energy projects can both achieve our climate goals as well as create hundreds of real jobs and bring in hundreds of millions of new investment in the process,” Wickham said.

The other two REZ zones are the Northern QREZ and the Central QREZ.

“With its high-quality wind resources, the Southern Downs QREZ west of Warwick is an ideal location to support continued expansion of energy intensive industry in SEQ.”

ACCIONA Energia already operates four wind farms and a solar farm in Australia, generating enough energy to power 280,000 homes. The completion of the MacIntyre Wind Farm in 2024 will triple that figure.

The superstar of the precinct will be the 180 N163/5.X turbines from German manufacturer the Nordex Group, which installed the first of the turbines in late August 2021.

“With its approximately 80m rotor blades and a rotor sweep of 20,867 square metres, the N163/5.X is currently the most efficient Nordex turbine in the 5MW class for moderate and light-wind sites,” Nordex said following the first installation.

The turbine has since won a “Turbine of the Year” gold medal in the category of onshore turbines with 4.7MW+ rating in an industry publication award.

A spokesman from ACCIONA said the early construction works on the precinct were now underway, with preparations being made for the turbine foundations which will be about 20m in diameter and 3m deep.

Construction has also started on internal access roads. The roads will be used for transportation of the massive equipment and connection routes between turbines. An accommodation camp will also be built for the majority of the 450-strong construction workforce.

Once the foundations are built, the wind turbines will be assembled on site, before the nacelle (housing the gears, generators and electrical conversion equipment) is attached. The hubs and blades are then attached.

The construction process is expected to take between 12 and 24 months, with the precinct in operation in 2024.

Read more: How will the 1000MW offshore wind farm in Bass Strait work?

“At more than one gigawatt, this is easily Powerlink’s largest connection project to date,” Simshauser said.

The project has carried it with the requirement of community consultation with landholders, neighbours and stakeholders across the 36,000ha site. ACCIONA says current farming practices will continue both during and after the construction phase of the wind farm. The giant turbines will describe their rotor sweep in 20,867m2 circles, high above grazing sheep.

ACCIONA leases the required land from the private landholders. The height of the towers means they will be visible across the region.

ACCIONA said in a statement it placed a high importance on community consultation.

“Working with the community and earning their support is central to our philosophy,” the statement said. “When we build a wind farm we’re there for the long haul (at least 30 years) so we want to be good members of the community and good neighbours with those around us.”

ACCIONA has also given a $2.5 million commitment to local community programs, events and initiatives, including scholarships and sponsorships.

Co-investor Ark Energy, a Queensland-based company, plans to accelerate the decarbonisation of its sister company, Sun Metals’ zinc refinery in Townsville, through equity offtake from MacIntyre.

The wind farm is expected to provide approximately 64% of the energy requirement to the zinc refinery as part of its goal to be one of the first major refineries in the world to produce green zinc.