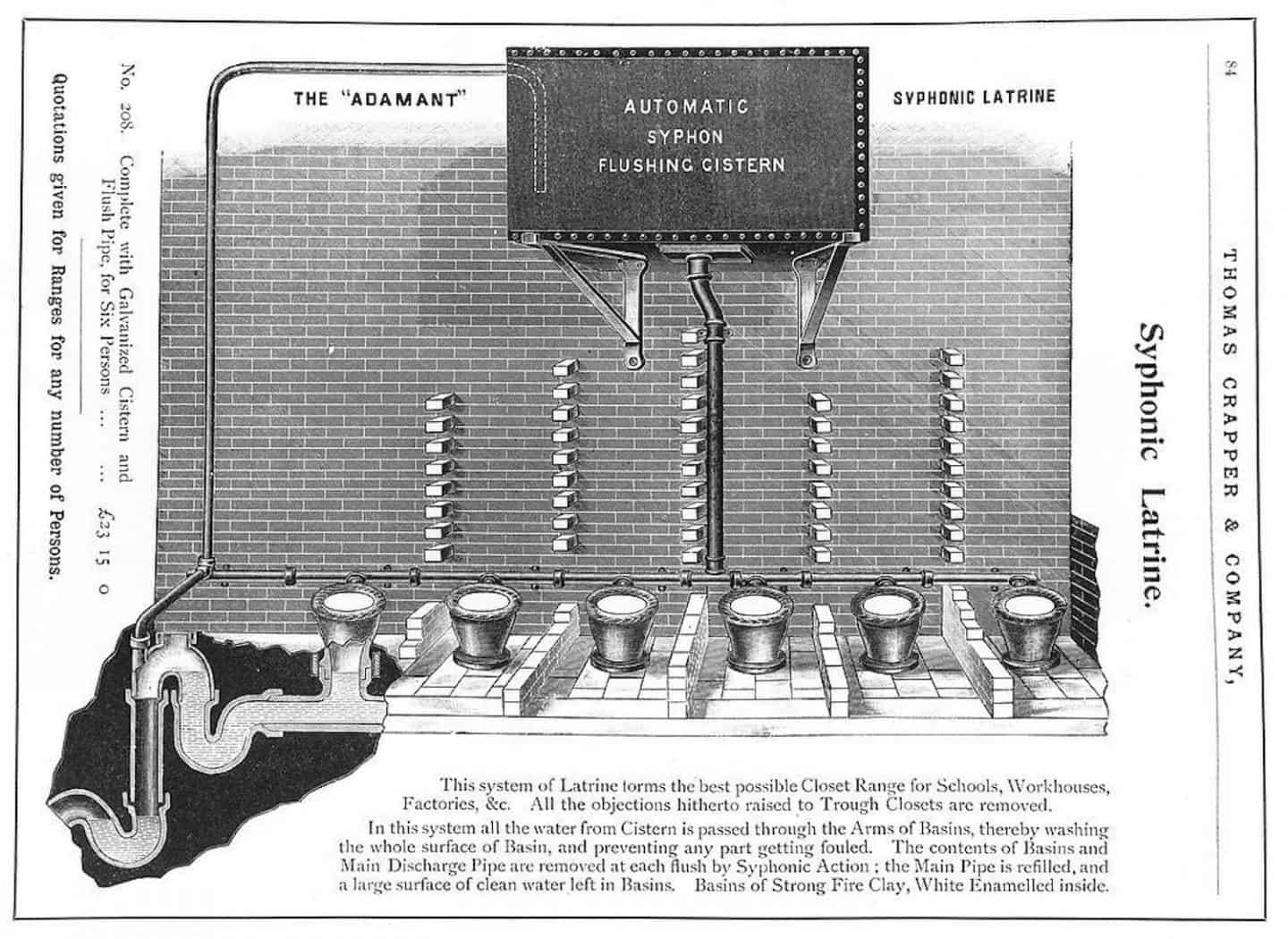 It seems odd, both the fact and the commentary, but it has often been noted that many Americans go to lengths to avoid using the word “toilet”. They will ask for directions to the restroom, bathroom, washroom, men’s or ladies’ room, as if toilet has rude connotations.

Another synonym sometimes attributed to Americans is “crapper”. The origins here too are opaque, but it is generally believed the word came to use because US soldiers stationed in Britain during the First World War frequently saw the words “T. Crapper-Chelsea” stencilled on plumbing fixtures in English lavatories.

Thomas Crapper was certainly a real person, although here too there has been some dissension, possibly as a result of a 1969 biography, Flushed with Pride, by Wallace Reyburn, noted for writing stories about invented characters (see, for instance, his 1971 title, Bust-Up: The Uplifting Tale of Otto Titzling and the Development of the Bra).

Indeed, although the exact date of his birth is not known, it is certain that he was born in Thorne, south Yorkshire, England, in 1836 and baptised on 28 September of that year.{%recommended 7390%}

Claims that Crapper invented the flush toilet have been widely refuted, but no less a source than Plumbing & Mechanical Magazine, in a June 1993 article titled Thomas Crapper: Myth & Reality, credits him as operating three plumbing shops in London and holding nine plumbing-related patents, four for improvements to drains, three for water closets, one for manhole covers, and one for pipe joints.

“Every patent application for plumbing-related products filed by Crapper made it through the process, and actual patents were granted,” it says.

An article about Crapper in the Smithsonian Magazine calls him “a successful sanitary engineer whose greatest innovation was actually the invention of the bathroom fittings showroom, something that brought flush toilets out of the water closet and into the public eye”.

It says the idea of displaying bathroom fittings was considered scandalous, but Crapper helped create a market for the “relatively new and expensive” indoor plumbing he was selling.

One important plumbing innovation wrongly attributed to Crapper, the “silent valveless water waste preventer”, was a siphon discharge system that allowed a toilet to flush more efficiently with less leakage. It was in fact patented by Albert Giblin, and merely popularised by Crapper’s company.

The true inventor of the indoor flush toilet is Sir John Harrington (or Harington), a godson of Queen Elizabeth I.

According to a story in Historic UK, Harrington had been banished from court, exiled to Kelston near the southwest city of Bath. During his exile, from 1584 to 1591, he built a house for himself and devised and installed the first flushing lavatory, which he named Ajax.

Eventually Queen Elizabeth forgave him, and visited his house in 1592, where Harrington proudly showed-off his new invention, “and the Queen herself tried it out! She was so impressed it seems, that she ordered one for herself.”

His water-closet had a pan with an opening at the bottom, sealed with a leather-faced valve. A system of handles, levers and weights poured in water from a cistern, causing the valve to release.

One drawback of the device, says history.com, is the more than 28 litres of water required each time it operated.

Crapper, correctly credited or not, enjoyed a prosperous career, counting among his customers the kings Edward VII and George V. He retired in 1906, passing the firm to his nephew George Crapper, and died, from colon cancer, in 1910.

Originally published by Cosmos as Science history: the man who didn’t invent the flush toilet