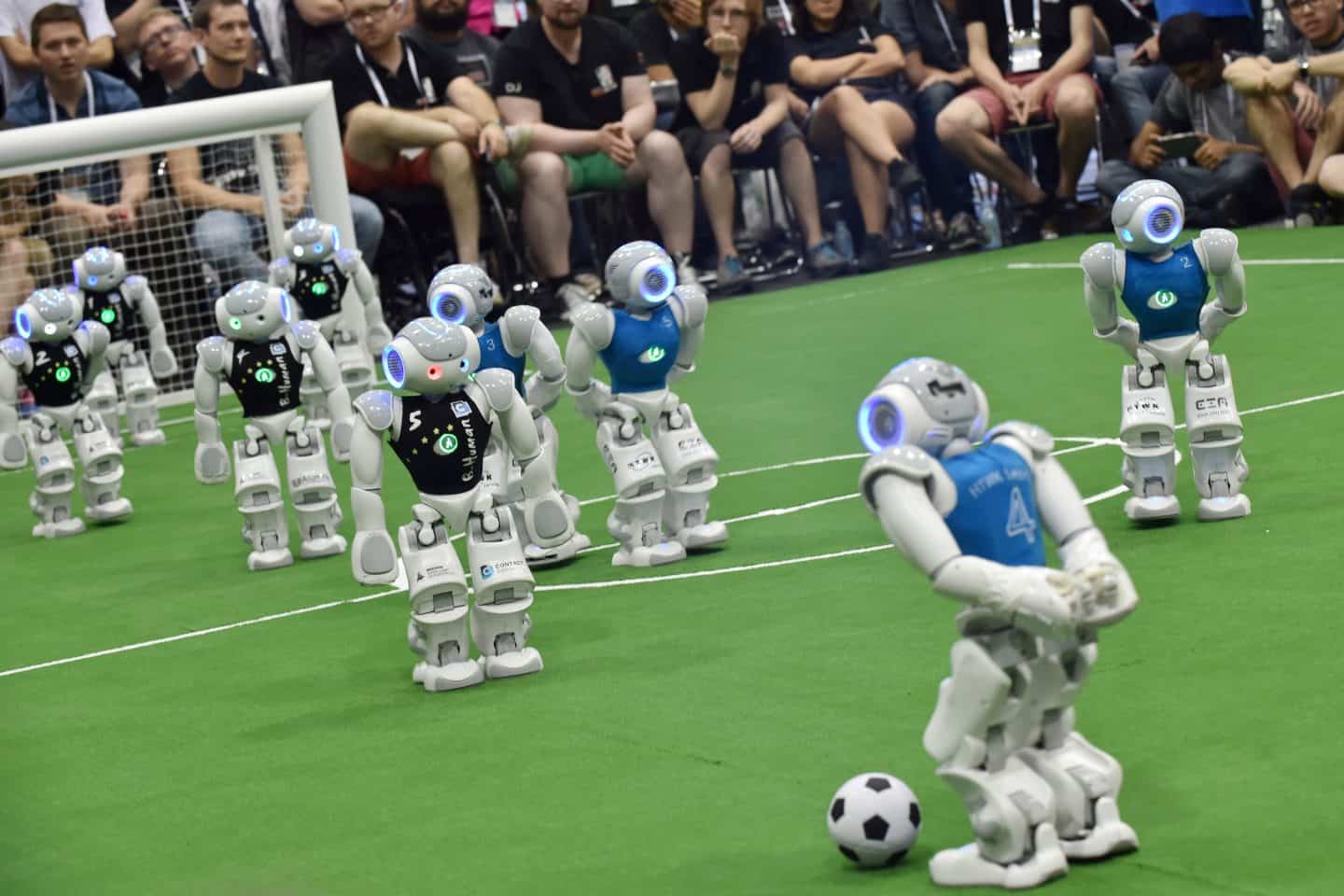 There’s one aspect of the world game in which robot footballers already outdo human athletes: the dive. When a robot football team takes the field, players fall over with comical regularity. Not, of course, that it is part of their game plan, an attempt to pick up an easy penalty; they simply lose balance very easily, tumbling without guile usually to their own disadvantage.

Which is to say that programming a computer to play chess at the level of a grand master has proven far easier than building robots that can play a ball game with as much skill as a local squad of under-sevens. That’s why the RoboCup exists. Established in 1997, the annual competition serves as a vehicle to promote robotics and AI research, drawing research teams from around the world to compete in what its organisers describe as “a publicly appealing but formidable challenge”.

RoboCup 2017 has just been held in Nagoya, Japan, with more than 40 teams competing in a variety of events. Not all events were football-related – there were all competitions for urban search and rescue (USAR) and the use of robots in work-related scenarios – but the ball games were the most fun – and arguably the most visionary. “Building a robot that plays soccer will not by itself generate significant social and economic impact,” the organisers note, “but the accomplishment will certainly be considered a major achievement for the field.”

In the final of the RoboCup Standard Platform League, the B-Human team from the German Research Center for Artificial Intelligence (DFKI) and the University of Bremen defended its 2016  title by beating Nao-Team HTWK of the Leipzig University of Applied Sciences 2:1. All teams in the standard platform league use the same robot, the NAO from SoftBank Robotics. Each robot is programmed to play autonomously but co-operatively as part a team, with communications between players.

A member of the Chinese ZJUDancer team stands up against opponents from the French Rhoban Football Club in the final of the kid-size category of the Humanoid League. Rhoban nonetheless went on to score an emphatic 4-0 victory. Robots in the Humanoid League are autonomous with human-like bodies and senses. This distinguishes them from robots in other leagues that may look humanoid but use non-human-like range sensors to simplify the tasks of perception and world modeling. Humanoid League robots compete in three size categories: kid size, teen size and adult size. This video captures the tumult and the shouting of the big game.

While moving and kicking the ball without falling over still remains a challenge, those involved in the Humanoid League believe it is making a significant contribution to the evolution of important technologies for the future robots, with physical abilities, spatial awareness, co-operative strategies and team co-ordination improving each year.

In the final teen-size final of the Humanoid League, Team NimbRo from the University of Bonn vanquished Huro Evolution TN from the National Taiwan University of Science and Technology 2-0.

The NimbRo team also reigned supreme in the the adult-size competition of the Humanoid League, a one-on-one event in which the competing robots are shadowed by human minders lest the machines lose their balance – the bigger you are, the harder you fall. Team NimbRo’s robot crushed German compatriot “Sweaty”, from the Offenburg University of Applied Sciences, in the final by 11-1.

Looking like a game of iRoombas, the Small Size League requires robots to fit within an 180 mm diameter circle and be no higher than 15 cm. Teams of six play against each other using a golf ball. The competition is focused on improving multi-robot/agent co-operation and control in a dynamic environment with a hybrid centralised/distributed system. The robots are thus not autonomous but work as a swarm, with all objects on the field tracked by four cameras suspended above the playing area. Off-field computers process the information needed to co-ordinate and control the robots. In the final, the SRC team from China pipped ER-Force from Germany by 2-1.

The goal of RoboCup organisers is that, by the middle of the 21st century, “a team of fully autonomous humanoid robot soccer players shall win a soccer game, complying with the official rules of FIFA, against the winner of the most recent World Cup”. Right now that seems rather ambitious, but when you consider the technology available put humans into space a half-century ago, it’s a dream that just might well come true.