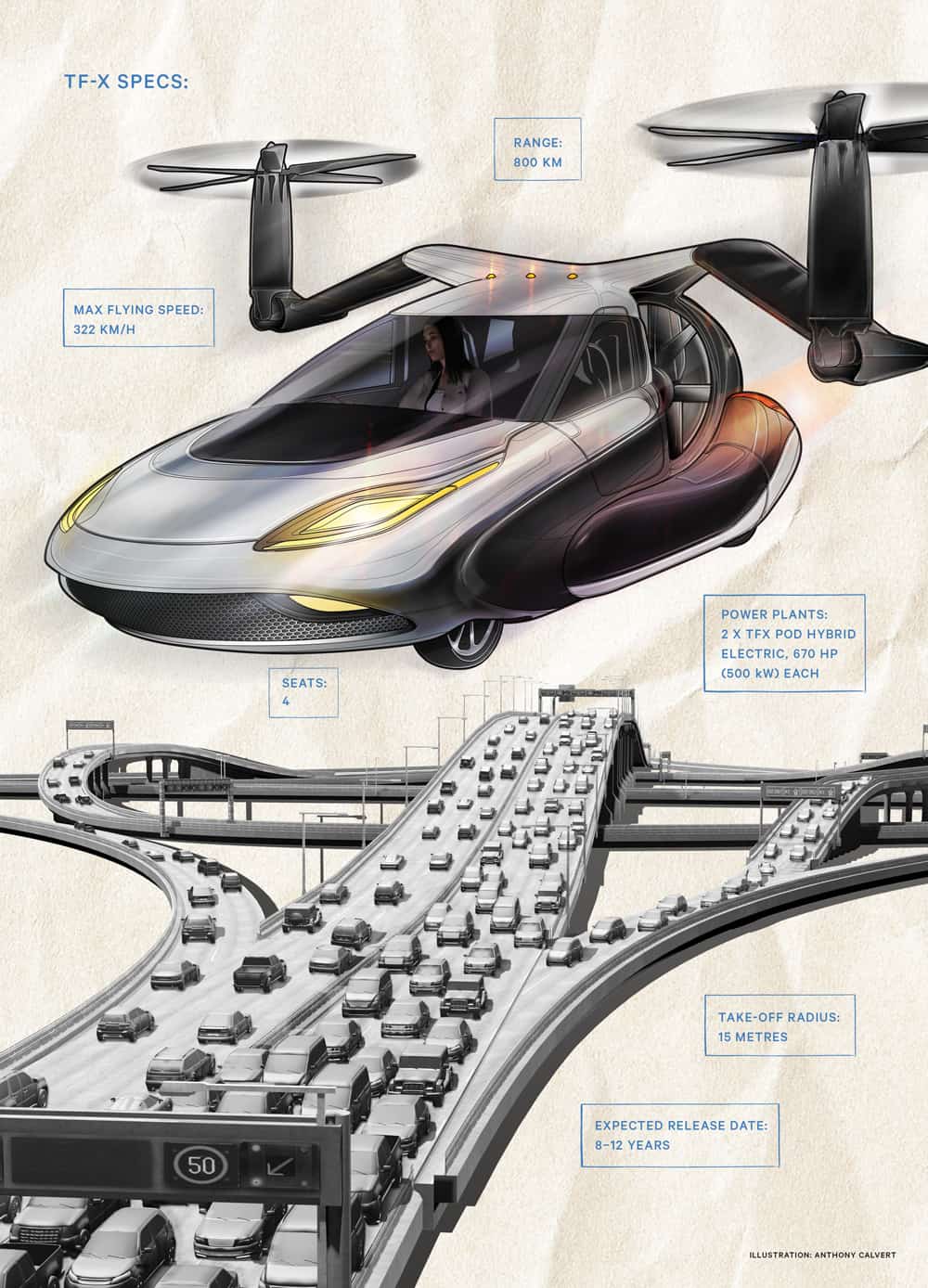 Pull out of your driveway, push a button and take off. The flying car is a futuristic dream that has long been just out of reach. Now, finally, the new technology that guides autonomous drones and self-driving cars means the first seemingly marketable flying cars could be about to take off.

It has been more than a century since the first attempt at a flying car – a sort of station wagon with wings, called the Curtiss Autoplane. It managed a few hops at an expo in New York in 1917 but never achieved full flight.

Almost every decade since has had its own flying car designs. Perhaps the closest the idea ever got to market was in the 1970s when Ford seriously considered the feasibility of producing the Aerocar, designed by Moulton Taylor. Then the decade’s oil crisis killed off the idea.

Now American company Terrafugia (from the Latin words for “earth” and “flee”) is one of a new generation chasing the dream. Its first offering, the Terrafugia Transition, is already available for pre-order. A two-seater with foldable wings, it is more ‘driving plane’ than ‘flying car’. In the air it looks sporty enough, with a top speed of 160 km/h and a range of more than 600 km, but you still need a runway to get airborne, and a pilot’s licence.

The Transition’s very name acknowledges the model is a stepping stone. Terrafugia’s next iteration, the TF-X, promises to be altogether more exciting.

Crucially, the TF-X will be able to take off and land vertically. Forget runways – a level clearing the size of a small helipad will do. Lift comes from two electric rotors running on powerful, but light, 500 kilowatt motor pods. Driving the rotors electrically is critical because it means they don’t need to be coupled to a heavy engine, like that of a helicopter. However, you will still need to charge the battery using the car engine, hybrid style.

In the air the vehicle’s two rotors can tilt forward and, along with the large rotary fan at the back, will propel the TF-X up to 322 km/h. The flying, take-off and landing will all be largely automated, so you won’t need to be a qualified pilot to fly it. Terrafugia expects flight training could be knocked off in about five hours.

The TF-X is designed to avoid dangerous situations by automatically skipping around bad weather, and to keep clear of restricted airspace (such as near airports) and other air traffic. If a driver becomes unresponsive, the TF-X will fly itself to the nearest pre-approved landing spot. In case of a more urgent problem, a full-vehicle parachute is packed away inside the chassis.

On the ground, with the rotors neatly packing away inside the chassis in less than a minute, the TF-X will become a quite practical car. It will seat four, fit in a standard single-car garage or parking space, and run on regular petrol.

Backed by Geely, the Chinese automotive giant that owns Volvo and The London Taxi Company, Terrafugia reckons the TF-X will take another decade to develop. But a price tag in the region of US$349,000 means the TF-X will be a toy of the super-rich. {%recommended 1559%}

The rest of us might have to be content with ‘flying taxi’ services. Uber is investing in UberAir, which it hopes to have ready for the Los Angeles 2028 Olympics. Buzzing over gridlock, the company says, could reduce an 80-minute car journey to just four.

Uber does not plan to design or build the flying taxi aircraft itself. German company eVolo has already built one that could do the job. Its Volocopter 2X is not a flying car but helicopter-meets-drone, with 18 rotor blades.

The multi-rotor design allows excellent hovering stability, just like a drone, and avoids a helicopter’s deafening whomp. The fully electric aircraft has a range of 27 km at a cruising speed of 50 km/h, and can fly itself. It may be be the design direction to take with flying cars.

Uber has already signed deals to convert the roofs of up to 20 LA properties into landing pads, and another with NASA to develop software to manage a flying taxi fleet. Management is crucial. The thing about flying cars is that building the vehicle itself is the easiest part. Much more difficult will be coming up with regulations to manage air traffic, so that hundreds or thousands of small aircraft can safely fly low over populated areas.

Originally published by Cosmos as A bird? A plane? Car, actually.