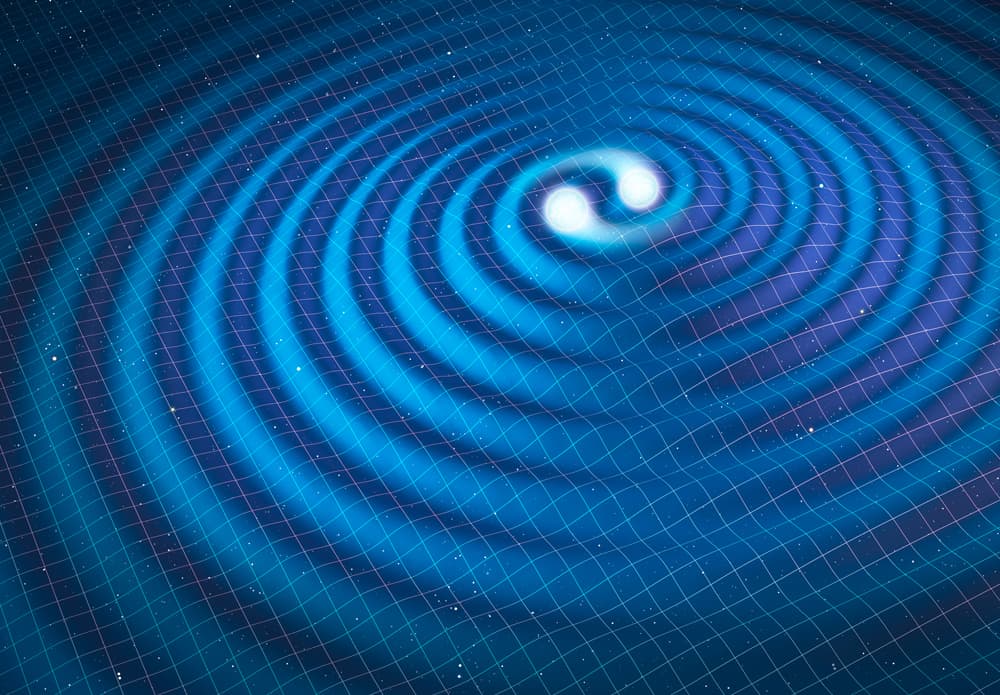 The scene: Pisa, Italy, late 16th century. Galileo Galilei enters the famous Leaning Tower. He climbs the steps, trailed by his students, carrying two metal balls of different weights. He steps out onto the top balcony, 50 metres above the ground, and holds the balls out over the tilted rail. He lets go. According to Aristotle’s theory of gravity, the heavier ball should fall faster. Galileo has set out to prove this wrong. The collected crowd watch as the two balls fall through the air – and hit the ground, simultaneously.

Galileo’s legendary experiment is considered one of the first demonstrations of the ‘equivalence principle’ – the idea that gravitational fields don’t discriminate. On Earth this means all falling objects will fall the same way. In the cosmos – combined with Einstein’s general relativity – it explains the near-simultaneous arrival of two signals from an explosion that happened a long time ago in a galaxy far far away.

The scene: a distant galaxy, 130 million years ago. Two neutron stars – mind-bendingly dense remnants of stars long dead – are locked in an orbit so tight that gravity warps them into teardrop shapes. Whirling around their common centre of mass, they stretch toward each other. Space itself is caught up in the motion, sending powerful ripples of distortion outward. The stars spiral in. At the instant of contact they create a spacetime tsunami, which spreads like a spherical shock front from a detonation. The stars merge, and within seconds the newly combined star collapses on itself, driving a jet of hard radiation with such incredible ferocity it punches through the stellar carcass and begins tearing across the galaxy.

The gravitational distortion from this event was detected by the LIGO and Virgo observatories, and the gamma-ray flash by the Fermi space telescope. The signals came within two seconds of each other.

The near-simultaneous detection of the signals is another confirmation of a principle as old as Galileo, yet it has huge implications for our theories of gravity, and possibly for dark matter and dark energy.

Gravitational waves, the kind of spacetime distortions created by the neutron star collision, were first predicted by Einstein in 1915 and first detected at LIGO 100 years later. Central to Einstein’s picture of gravity is the idea that everything with mass warps the ‘fabric’ of space, so every planet, star or galaxy creates a kind of dent. When massive objects orbit each other they create ripples in this fabric: gravitational waves. Einstein predicted these waves would travel at the speed of light. We already had evidence of this but the neutron star explosion was a direct confirmation, since the gravitational signal and the light travelled 130 million years and arrived at virtually the same time.

This simultaneous arrival wasn’t guaranteed, even if the speeds were the same. The space between us and that distant galaxy is warped with gravitational divots due to all the masses along the way, including the originating galaxy and our own. The equivalence principle states that gravitational waves and light should both follow the curve of space, diving in and out of these dents, being delayed a little by each diversion. In this case the delay might have been months or even years; but, whatever it was, it was exactly the same for both.

The implication? Lots of theories just died a spectacular death.

New theories of gravity that break the equivalence principle have been proposed to solve problems like dark matter and dark energy. Instead of invisible matter making galaxies rotate too quickly, or mysterious stuff making the universe expand faster, some alternatives conjecture that gravity acts differently than we thought. These theories often have light and gravity following different paths through space, to explain differences between what we see and what general relativity predicts without dark matter and dark energy.

Now we know that doesn’t work. It may be possible to find a new theory of gravity but, at least in regard to the equivalence principle, it has to act exactly the way Einstein proposed.

There are still things we don’t know. Exactly what delayed the gamma rays those two seconds is still up for debate. And whether Galileo really climbed the famous tower himself is lost to history. But both experiments were spectacular demonstrations of the radical universality of gravity, and each expands the edges of our understanding of the universe.