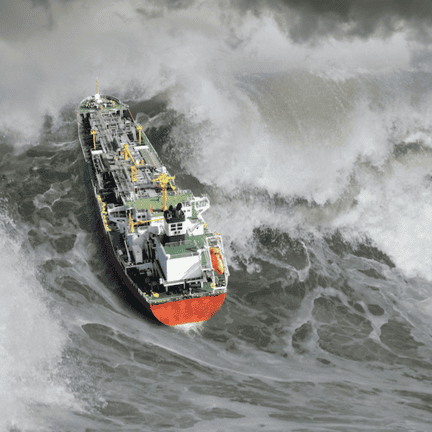 Towering up to 30 metres with the power to snap ships in half, yet conjured from apparently calm seas, the rogue wave is one of the most devastating forces a sailor can face.

And while we can’t stop monster waves cropping up, a pair of engineers from the Massachusetts Institute of Technology developed a prediction tool that can give sailors a precious few minutes’ warning – enough time to batten down the hatches.

Their algorithm was published in the Journal of Fluid Mechanics.

“The approach is original,” says Miguel Onorato, a physicist at the University of Turin, who was not involved in the work.

“It is fast, easy to implement and it does not require computational power.”

Rouge waves are not your average beachside swell. They are born when loads of small waves siphon their energy to a single wave, which becomes bigger and more powerful than any of those “feeding” it.

While rare, rogue wave formation can happen in a matter of minutes. And even a couple of minutes’ warning could let sailors lock down their ships and even steer towards the wave to cut through it head-on.

But predicting when and where they’ll pop up in time to prepare for them has been almost impossible. Current techniques require powerful computers to simulate complex interactions between waves accurately – but even with multiple computers, is still too slow to give sailors enough warning.

This task can be performed by laptops on the ship – no need for supercomputers.

So Will Cousins and Themistoklis Sapsis looked to find a way to simulate rogue waves using a standard laptop.

They took previous work, which found waves that travel together in the same direction is often a sign that a larger wave might be forming. They then developed an algorithm to single out particular wave groups that may go rogue.

The algorithm takes wave data from nearby buoys. If the algorithm picks up waves travelling together, it focuses on simulating that cluster to predict the chances of the rogue wave forming.

This task is considerably less demanding and can be performed by laptops on the ship – no need for supercomputers.

And it provides up to three minutes’ warning – enough to turn a smaller ship or batten down a larger one.

They envision ships and oil rigs using their algorithm, along with on-board radar and other surface imagers, to scan how waves around them behave to predict a rogue wave.

“Using data and equations, we’ve determined for any given sea state the wave groups that can evolve into rogue waves,” Sapsis says.

“Of those, we only observe the ones with the highest probability of turning into a rare event. That’s extremely efficient to do.”

Originally published by Cosmos as Warning system for rogue waves