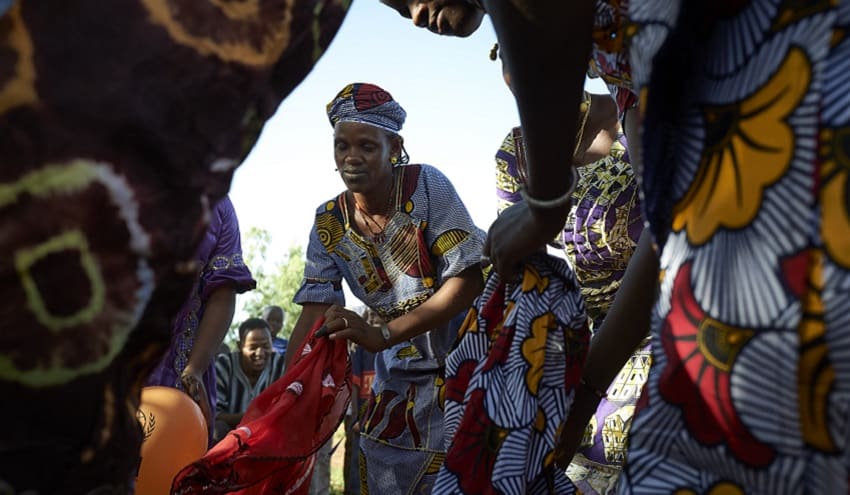 A group of Fulani women dance as they celebrate the Eid al-Adha. Genomic analysis of minority communities reveals a staggering number of genetic variants has been missed. Credit: Michelle Cattani
More on:
Genome

Genomic sequencing of nearly 1000 people – from minority communities often overlooked by geneticists – has provided a glimpse of our species’ history in unprecedented detail. The diverse genomes – 929 of them in all – represent 54 human populations from around the world.

All were collected as part of the Human Genome Diversity Project, a global effort that started in the 1990s in an attempt to address the bias in genetic databases towards those with European ancestry. This is the first time so many of those samples have been fully sequenced.

Many of the populations represented have unique languages.

“Often language and ancestry go together, so if a group has a very distinct language, they will often also have somewhat distinct genetic history,” explains evolutionary geneticist Anders Bergström from the Wellcome Sanger and Francis Crick Institutes in the UK, who led the study.

Reaching into the far corners of humankind’s diversity revealed a trove of previously unidentified genetic variants, Bergström and his colleagues report in the journal Science.

Across the genome, the team identified millions of genetic variants, including more than 67 million single letter differences, nearly nine million small insertions or deletions, and more than 40,000 changes in sequence copy number.

Hundreds of thousands of these variants hadn’t turned up in other similar sized genome sequencing projects, such as the 1000 Genomes Project. That’s because previous studies have sequenced genomes from people living in large, metropolitan populations, says Bergström.

The sheer volume of new variants identified underscores how much geneticists have been missing by focusing on these predominantly European-ancestry populations.

“Most variants have very little effect on our biology,” says Bergström – but they are a goldmine of information for mapping demographic changes that have occurred during our prehistory.

By looking for genetic variants unique to specific populations or shared with our archaic relatives – the Neanderthals and Denisovans – the researchers discovered that most of the separation between modern-day populations has occurred over the past 250,000 years.

But some of the earliest splits were anything but clean. In Africa, for instance, the data points to a complex picture of interwoven threads of ancestry.

Instead of a simple family tree with branches splitting neatly into smaller and smaller divisions, African ancestry looks more like a braid, with continual exchanges of genes between populations over an extended period of time.

Africans have also retained a larger amount of genetic variation than in other regions, reflecting the genetic bottleneck that occurred when humans migrated out of Africa between 70,000 and 50,000 years ago.

Across Eurasia, the highest frequency variants reached just 10% to 30%.

“What we think is going on is that, within Eurasia, there’s been a lot of large-scale migration, probably in the last 10,000 years, especially after the advent of agriculture,” says Bergström.

“Once people started moving around, this probably just kind of smeared out the genetic landscape of Eurasia, and genetic variants that previously might have been restricted to one geographical region moved into other regions,” he says.

The advent of agriculture also saw most populations across Europe and East Asia dramatically expand. Expansions were less pronounced in a handful of more isolated populations – the Sardinians and Orkney Islanders in Europe and the southern Chinese Lahu, for instance.

In Africa, agriculturalist populations increased in size, but hunter-gatherers – such as the Biaka, Mbutu and Sand – showed no growth, or even a decline.

Bergström and his colleagues also wanted to find out more about our interactions with our now-extinct relatives, the Neanderthals and Denisovans.
To figure out how many periods of intermixing occurred, they looked for Neanderthal and Denisovan variants present in modern-day people.

Some studies have suggested that because East Asians have marginally more Neanderthal ancestry than Europeans, there might have been a second pulse of genetic influx from Neanderthals somewhere along the line.

Bergström’s analysis suggests this wasn’t the case. Neanderthal-derived variants were similar in all people, suggesting a single period of time where humans and Neanderthals interbred.

In the case of Denisovans, however, there is evidence of at least two – and possibly more – interbreeding episodes. “Denisovan segments in different people are sometimes quite different,” says Bergström, “reflecting how there must have been more than one source population contributing these segments.”

Some African variants identified are shared with Neanderthals and Denisovans, but not because there was interbreeding between the groups. Rather, those variants were inherited by all three groups from their common ancestor hundreds of thousands of years ago and independently retained.

Aside from shedding a light on prehistoric population dynamics, Bergström hopes that the diverse genomes sequenced in the study will serve as a useful resource for medical sciences.

“People doing medical genetic studies often want to, for example, look up the frequency of a mutation in different populations across the world,” he says, “so we hope that this resource will be useful for those kind of studies.”

As healthcare inches towards a future that could see treatments tailored to an individual’s genetic make-up, capturing as much of the genetic diversity present across the global population will be crucial.

“If we have not characterised genetic variants that might be common in non-European populations, this could risk leading to an equal level of health care being available to people from different genetic backgrounds,” says Bergström.

But, he notes, “there are still many, many kind of black spots on the map, there are still many populations that have not been characterised, there’s still a huge bias towards the West in terms of our genomic understanding of humanity.”

One notable black spot is the continent of Australia. No Indigenous Australian groups were included in the Human Genome Diversity Project.
“Our study shines additional light on this problem that everyone is aware of in medical genomics research, that our understanding of human genetic variation is very much European skewed.”

One goal the researchers would like to see reached is whole genome sequences of at least 10 individuals from each of the estimated 7000 human linguistic groups. With numerous national and regional genome projects currently underway, Bergström says it’s a goal that isn’t out of reach.