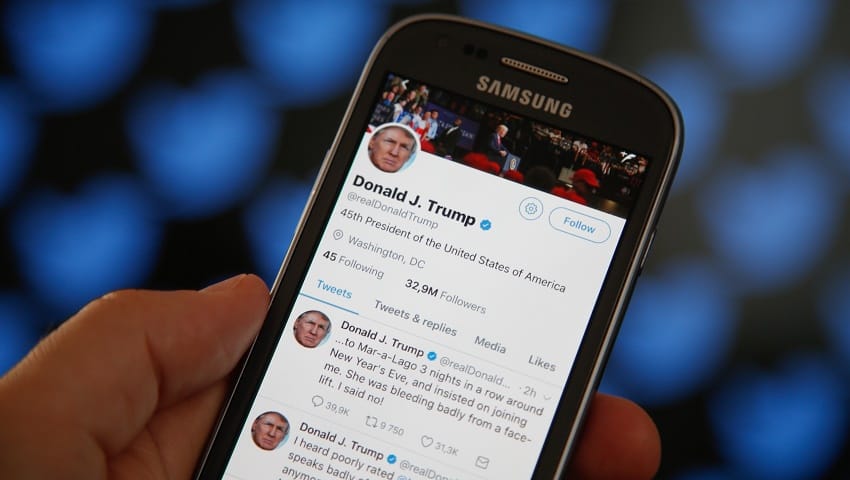 Tweets from the @realDonaldTrump account are likely from several different people and not as random as popularly thought. Credit: Jaap Arriens/NurPhoto/Getty Images

The media narrative that maintains Donald Trump uses Twitter as a vehicle for spontaneous emotional outbursts, and that his social media account thus represents a kind of micro-blogged diary of a mad man, may be well off the mark.

That’s the conclusion drawn from an extensive analysis of the stylistic variations to be found in the collected Trumpian tweets of 2009 to 2018.

The review was conducted by linguists Isobelle Clarke and Jack Grieve from England’s University of Birmingham and published in the journal PLOS ONE.

The pair are by no means the first to note the irony that the presidential twitter account, @realDonaldTrump, is very likely the collaborative result of several different people and, in that sense, not the authentic voice of Trump at all.

Many researchers have already studied this aspect of the president’s favoured communication channel, basing authorial assumptions on whether any given mini-rant was composed on an Android phone – Mr Trump’s preferred device – or an iPhone, favoured by many of his staff.

Clarke and Grieve, however, find authorial integrity a less significant aspect than the effect of the output. After all, they note, the Twitter account generated approximately $5 billion worth of free media for Trump’s presidential campaign. It is, they suggest, “one of the most important and influential social media accounts in history”.

By analysing grammatic patterns and word choices, the researchers identified four distinct styles on the account, which they dubbed “conversational, campaigning, engaged, and advisory”.

Far from cropping up randomly, the tweets shifted in style in line with Trump’s immediate goals.

“Most major shifts in style align to a small number of indisputably important points in the Trump timeline, especially the 2011 Birther controversy, the 2012 election, his 2015 declaration, his 2016 Republican nomination, the 2016 election, and his 2017 inauguration, as well as the seasons of his television series The Apprentice,” the researchers conclude.

The results, they note, give the lie to the perhaps comforting notion that the President regularly goes off-chops and hits the keyboard to vent momentary furies. On the contrary, say the researchers, the data “offers evidence that there was a communication strategy underlying the use of this platform by Trump and his team, especially during the 2016 campaign”.

In formal terms, Clarke and Grieve limit their conclusions only to what can be drawn from Twitter usage around the presidential election.

In their conclusions, however, they can’t resist bringing up a further, and troubling, piece of late-stage analysis.

After the election, they note, there was another major shift in the mix of Trumpian tweets, with compassionate messages becoming much fewer while combative and accusatory ones grew in number.

“In general, we simply see a gradual fall in an engaged style and a gradual rise in campaigning style after Trump assumed office,” the researchers write, “perhaps reflecting decreasing concern from Trump and his team about how they are perceived by people from outside their base or an increasing concern about running for a second term.”