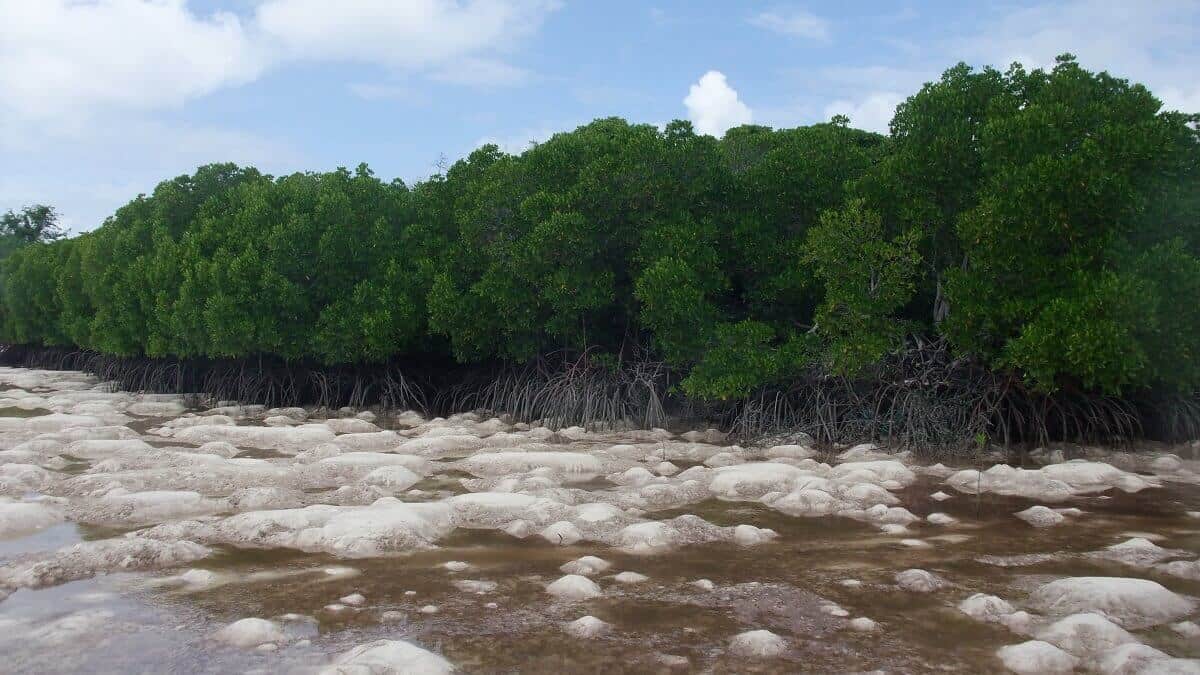 Mangrove forests are massive carbon sinks, capable of storing over 1,000 tonnes of carbon per hectare.

A study on mangrove forests in Indonesia’s Wakatobi National Park has revealed how the mangroves fix carbon and that two of the most important methods are at risk from climate change.

The researchers, who are based at the University of Portsmouth, UK, showed that closer to land, microbes break down fallen wood, turning it into carbon-rich organic matter. Closer to the ocean, “shipworms” – clams with calcium carbonate-rich cells – take up the work.

Both are vulnerable to climate change: rising sea levels make it harder for the upper ecosystem, while ocean acidification puts shipworms at risk.

“This data highlights the delicate balance between wood-biodegrading organisms and fallen mangrove wood,” says Dr Ian Hendy, a researcher at the University of Portsmouth’s School of Biological Sciences, and lead author on a paper describing the research, published in Frontiers in Forests and Global Change.

“Mangrove forests are crucial to mitigating climate change, and alterations to the breakdown of fallen wood in the forests will change the above-ground carbon cycles which may have an effect on mangrove carbon stores.”

A study published in PLOS ONE reports that during 2020, more than 40,000 Twitter users used the pandemic misinformation hashtags “Scamdemic” or “Plandemic”.

A fifth of these accounts were suspended by Twitter by January 2021.

In 2021, there were more than four billion people engaging with social media, with an average of eight accounts managed by each user across social media platforms.

During 2020, the hashtags #scamdemic and #plandemic were used over 400,000 times on Twitter. These hashtags suggest that the COVID-19 pandemic was a planned conspiracy and spread misinformation about COVID vaccines, the origin of the SARS-CoV-2 virus, and about Big Pharma and hospitals profiting off the pandemic.

By analysing the social media data, researchers hope to better understand the impact that false information has and predict the population’s response towards public health intervention. For example, the most frequently tweeted topic was “Complaints against mandates introduced during the pandemic” with 79,670 tweets related to complaints against mask-wearing, social distancing, and business and event closures.

Pumpkin and watermelon are both big contributors to Uganda’s agriculture – the former being a stalwart of the country’s production for centuries, the latter being a new and rapidly increasing industry.

A study in CABI Agriculture and Bioscience accounts the risks posed to both, with a detailed account of the pests, diseases and drought dangers reported by farmers.

“This study highlights the importance of watermelon and pumpkin as sources of food, income, and nutrition security for local communities, even when these are not priority crop commodities in Uganda,” says senior author Professor Arthur Tugume, a researcher at Makerere University, Uganda.

“Several interventions should be implemented to boost production of these crops so that the values of the crops are realised even more,” says lead author Fred Masika, a researcher at Makerere University and Muni University, Uganda.

“For example, establishing storage centres for watermelon in the newly established irrigation schemes (e.g., Ngenge, Tochi, Doho, Mubuku, and Wadelai irrigation) and in Central Uganda where high production is expected.”

Spinal fusion is a surgery used to permanently fuse two or more vertebrae together in the spine. It prevents any movement between them and is used to treat a wide variety of spinal disorders to improve stability, correct a deformity, or reduce pain.

Often, surgeons will use an implanted cage to provide support where the spinal disc once was between the vertebrae. Now, researchers – from the University of Pittsburgh Swanson School of Engineering, US – have created a 3D printed implant that can simultaneously double as a sensor to monitor spinal healing.

The research has been published in the journal Advanced Functional Materials.

The implant is made out of a metamaterial – materials engineered to have a property not found in naturally occurring materials.

This metamaterial generates its own power when under pressure in a process called contact-electrification.

When pressure is applied, contact occurs between the electrically conductive and dielectric (poorly conductive) microlayers of the material. This produces an electric charge that relays information about the condition of the material matrix.

A tiny chip records data about pressure on the cage – an important indicator of healing – and this can be read non-invasively using a portable ultrasound scanner.

The team has successfully tested the device in human cadavers and are looking to progress to animal models.

A surprising discovery in cancer research has found that breast cancer metastasis is regulated by our sleep cycles, and spreads while we are asleep.

Over 2.3 million people each year worldwide contract breast cancer. If detected early enough, patients usually respond well to treatment. Things become much more difficult if cancer has already metastasised. This is when circulating cancers cells break away from the original tumour, travel around the body through the blood stream, and eventually form new tumours in other organs.

“Our research shows that the escape of circulating cancer cells from the original tumour is controlled by hormones such as melatonin, which determines our rhythms of day and night,” says lead author Dr Zoi Diamantopoulou from ETH Zurich, Switzerland.

This research indicates that the timing of when tumour or blood samples are taken for diagnosis may influence results interpreted by oncologists.

“In our view, these findings may indicate the need for healthcare professionals to systematically record the time at which they perform biopsies,” says study leader Professor Nicola Aceto from ETH Zurich. “It may help to make the data truly comparable.”

The results of the study were published in the journal Nature.

Originally published by Cosmos as You may have missed… mangroves’ carbon storage potential, smart implants, and twitter misinformation