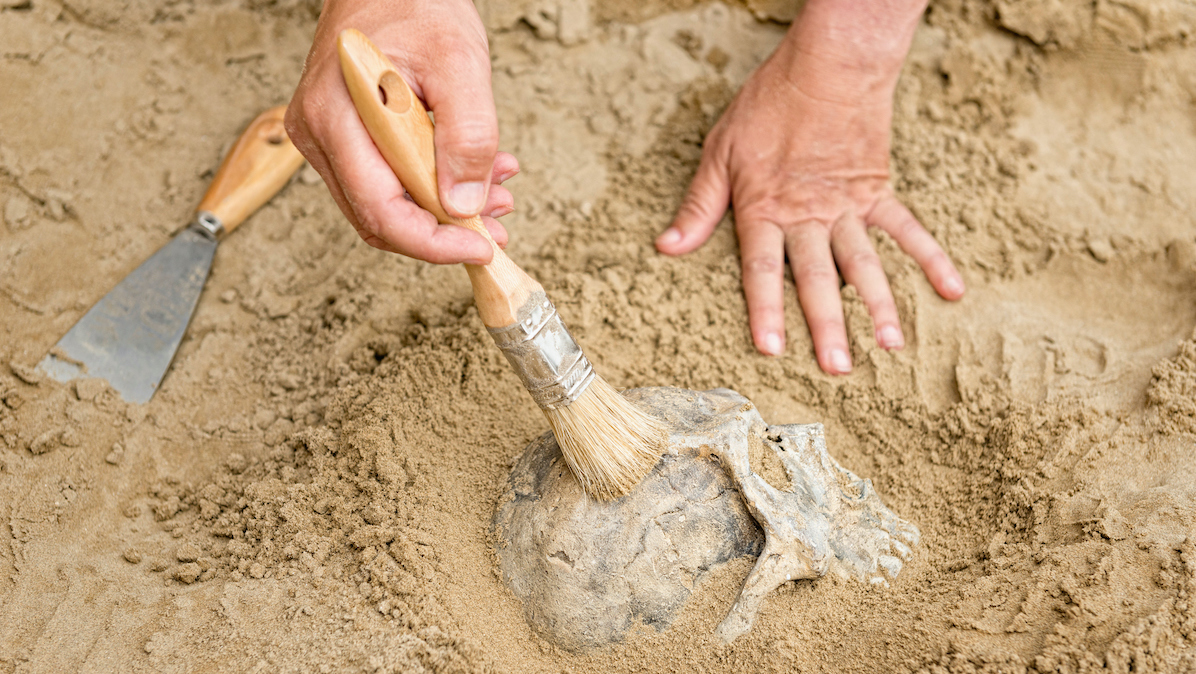 Radiocarbon dating can be used to date the archaeological remains of once-living things, like samples of bone and wood. Credit: Stevica Mrdja/EyeEm/Getty Images
More on:
carbon dating

You’ll hear it often in stories about palaeontology and archaeology: “the wood was dated using radiocarbon dating”, “the rock was dated to 100 million years ago”.

But how is it dated? What does radiometric dating actually mean? And what methods of dating can be used to date which kinds of items?

What is radiometric dating?

Radiometric dating is a method of establishing how old something is – perhaps a wooden artefact, a rock, or a fossil – based on the presence of a radioactive isotope within it.

The basic logic behind radiometric dating is that if you compare the presence of a radioactive isotope within a sample to its known abundance on Earth, and its known half-life (its rate of decay), you can calculate the age of the sample.

Radiometric dating is useful for finding the age of ancient things, because many radioactive materials decay at a slow rate.

What is radioactive decay?

Radioactive atoms are unstable, meaning they decay into “daughter” products. The number of protons or neutrons in the atom changes, leading to a different isotope or element. The time it takes for one half of the atoms to have decayed is referred to as a “half-life”.

We know the half-lives of the radioactive isotopes found on Earth, and so we can trace how long a radioactive material within an object has been decaying for, and therefore how long (within a range of error) it’s been since the object was formed.

Some radioactive materials decay into daughter products that are also radioactive, and have their own half-life: the result is called a “decay-chain”, which eventually decays into a non-radioactive substance.

Radiocarbon dating is possible because all living things take in carbon from their environment, which includes a small amount of the radioactive isotope 14C, formed from cosmic rays bombarding nitrogen-14.

When an animal or plant dies, it will not take in any more carbon, and the 14C present will begin to decay. We can thus measure how long it’s been since the animal or plant died by comparing the presence of 14C with the known half-life.

This can raise complexities in archaeology when, for example, a society uses a piece of wood that was felled hundreds of years prior. There are also issues because the rate of cosmic ray bombardment of the planet over time has not always been stable: but this problem is largely redressed by a calibration factor.

Radiocarbon dating is not suitable for dating anything older than around 50,000 years, because 14C decays quickly (its half-life is 5,730 years) and so will not be present in significant enough amounts in older objects to be measurable.

Radiocarbon dating identified Ötzi, the Italian-Alps Iceman, as a 5,300-year-old traveller. More recently, Australian scientists used radiocarbon dating to figure out the age of wasp nests in rock art, and thereby establishing a date range for the art.

Potassium-argon dating is a method that allows us to calculate the age of a rock, or how long ago it was formed, by measuring the ratio of radioactive argon to radioactive potassium within it.

Radioactive potassium (40K – a solid) decays to radioactive argon (40Ar – a gas), at a known rate. When volcanic rocks are formed and cooled, all argon within the rock is released into the atmosphere, and when the rock hardens, none can re-enter.

This means that any argon present in a volcanic rock must have been produced by the decay of radioactive potassium, so measuring the ratio can enable a scientist to date the sample.

This method is limited, because it’s only applicable to volcanic rocks, but is useful for older archaeology because it has a date range of about 4.3 billion to 100,000 years ago.

However, there are potential issues with potassium-argon dating. For example, deep-sea basalts retain some argon after formation due to high hydrostatic pressure, and other rocks may incorporate older “argon-rich” material during formation.

Argon-argon dating is an updated method, based on the original K-Ar dating technique, that uses neutron irradiation from a nuclear reactor to convert a stable form of potassium into the argon isotope 39Ar, and then measures the ratio of 40Ar to 39Ar.

Argon-argon dating was used to determine that the Australopithecus Lucy, who rewrote our understanding of early hominin evolution, lived around 3.18 million years ago.

This technique involves measuring the ratio of uranium isotopes (238U or 235U) to stable lead isotopes 206Pb, 207Pb and 208Pb. It can be used to determine ages from 4.5 billion years old to 1 million years old. This method is thought to be particularly accurate, with an error-margin that can be less than two million years – not bad in a time span of billions.

U-Pb dating can be used to date very old rocks, and has its own in-built cross-checking system, since the ratio of 235U to 207Pb and 238U to 206Pb can be compared using a “concordia diagram”, in which samples are plotted along a straight line that intersects the curve at the age of the sample.

U-Pb dating is most often done on igneous rocks containing zircon. It’s been used to determine the age of ancient hominids, along with fission-track dating.

This method involves examining the polished surface of a slice of rock, and calculating the density of markings – or “tracks” – left in it by the spontaneous fission of 238U impurities.

The uranium content of the sample must be known; this can be determined by placing a plastic film over the polished slice and bombarding it with slow neutrons – neutrons with low kinetic energy. This bombardment produces new tracks, the quantity of which can be compared with the quantity of original tracks to determine the age.

This method can date naturally occurring minerals and man-made glasses. It can thus be used for very old samples, like meteorites, and very young samples, like archaeological artefacts.

Fission-track dating identified that the Brahin Pallasite, a meteorite found in the 19th century in Belarus – slabs of which have become a collectors item – underwent its last intensive thermal event 4.26–4.2 billion years ago.

This method involves calculating the prevalence of the very rare isotope chlorine-36 (36Cl), which can be produced in the atmosphere through cosmic rays bombarding argon atoms. It’s used to date very old groundwater, from between around 100,000 and 1 million years old.

Chlorine-36 was also released in abundance during the detonation of nuclear weapons between 1952 and 1958. It stays in the atmosphere for about a week, and so can mark young groundwater from the 1950s onwards as well.

Luminescence dating methods are not technically radiometric, since they don’t involve calculating ratios of radioactive isotopes. However, they do use radioactive material.

These methods date crystalline materials to the last time they were heated – whether by human-made fires or sunlight.

This is possible because mineral grains in sediments absorb ionising radiation over time, which charges the grains in “electron traps”. Exposure to sunlight or heat releases these, removing the charges from the sample.

The material is stimulated using light (optically stimulated luminescence) or heat (thermoluninescence), which causes a signal to be released from the object, the intensity of which can provide a measure of how much radiation was absorbed after the burial of the material – if you know the amount of background radiation at the burial site.

This method can date archaeological materials, such as ceramics, and minerals, like lava flows and limestones. It has a normal range of a few decades to 100,000 years old, but some studies have used it to identify much older things.

Other types of radiometric dating

There are several other radioactive isotopes whose ratios can be measured to date rocks, including samarium-neodymium, rubidium-strontium, and uranium-thorium. Each of these have their own advantages and idiosyncrasies, but they rely on the same logic of radioactivity to work.

Originally published by Cosmos as What is radiometric dating?