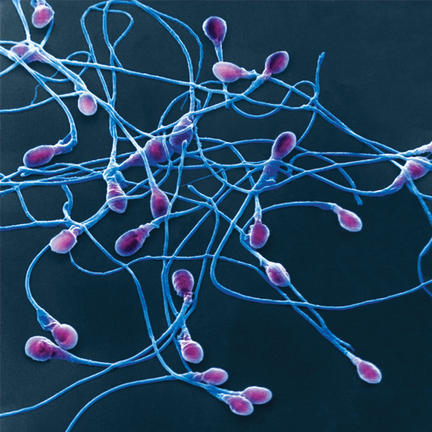 If you're a man reading this, chances are you have mutant sperm. Maybe not all of your sperm, but definitely some.

How these mutants are made has been an area of interest for a team of Oxford biologists and geneticists for more than 20 years. And now, for the first time, they've pinpointed the origins of disease-causing mutations in the testes of healthy men.

Geoffrey Maher and colleagues found sperm cells with a disease-causing mutation acted “selfishly” – as in, they preferentially divided and grew – to explain why some genetic diseases pop up more often than they should.

Random errors in the DNA-copying process are inevitable.

Unlike human eggs, which are all made and housed in a baby girl’s ovaries by the time she’s born, sperm are constantly produced throughout life.

“The testis is similar to a massive tangle of spaghetti: in fact each testis contains up to 400 metres of interwoven tubes in which sperm are made,” co-author Anne Goriely says.

When cells called spermatagonia copy their DNA and divide, one of the new cells is committed to producing sperm while the other remains a spermatoagonium to keep the cycle going.

And with millions of new spermatogonia and sperm churned out each day, random errors in the DNA-copying process are inevitable.

Some of these are harmless; others, such as mutations in a gene called FGFR2, cause diseases.

This selfish behaviour, the researchers say, is why some diseases – such as Apert syndrome, which results in malformed skull and limbs, and stems from FGFR2 mutations – arise up to 1,000 times more frequently than a typical, non-selfish DNA mutation.

It also explains why babies born with diseases such as Apert syndrome are born to healthy parents – and more so to older fathers, who accumulate mutant spermatogonia as they age.

“We were able to identify mutations associated with severe diseases in 13 of the 14 testicles analysed,” Goriely says.

In addition to the diseases studied, older paternal age is associated with some cancers, autism and schizophrenia.