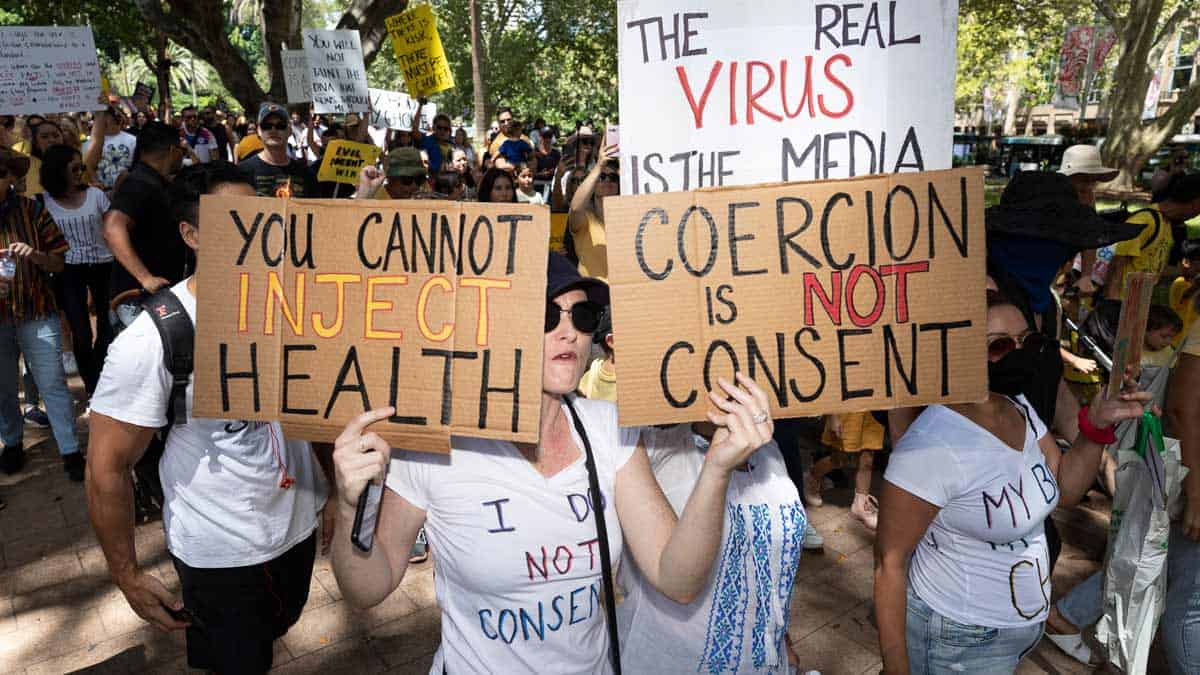 Those who spread misinformation are not always the same people who are affected by it. Instead of blaming people like these protesters at an anti-vaccination rally in Sydney this year, there should be tools that fault the fake news. Credit: Brook Mitchell / Getty Images

Fake news can have fatal consequences, and the technology already exists to help the people most affected stay safe. Now all we have to do is implement it.

People die because of misinformation. When hydroxychloroquine was publicised as a possible treatment for COVID-19, a couple from the United States ingested fish tank cleaner because it contained chloroquine phosphate. The husband died and the wife was hospitalised. There was no clear evidence to show that hydroxychloroquine was an effective treatment for COVID-19, and this remains the case, but Australian politicians continue to misinterpret studies and promote it as a treatment.

Stories like these can teach us important things about misinformation, including the gap between who spreads information and who is affected by it. They can also tell us where we might best focus our efforts when trying to manage its impact on the decisions people make.

But we focus most of our media and research attention on the people who create or promote misinformation, rather than on the people who are most affected – people like the couple who ingested fish tank cleaner after hearing about chloroquine, the people who died after replacing effective cancer treatments with alternative therapies, the young man who was sentenced to jail after firing an assault rifle in a pizzeria after reading Pizzagate conspiracy theories about child trafficking rings in online forums.

It seems easier to focus on the influential people who use their platforms to spread misinformation because they are highly visible and easy to blame. It seems to be much harder to reach out and empathise with the people who absorb it.

Should we turn to AI?

Machine learning is the branch of artificial intelligence where large volumes of data are used to train models to solve complex tasks that would usually be done by a human.

More than a decade ago, access to data and computing power led to a renaissance in machine learning for images, when computer scientists discovered that they could use millions of images of cats and dogs from the Internet to train models to solve all kinds of other unrelated tasks.

We now have cars that can safely drive themselves, and thanks to a similar, more recent renaissance in language and text data, we have criminal justice software predicting the risk of re-offending, and language models that can write articles about themselves for a newspaper.

Given what can be done, it should be no surprise that AI-based tools could be created to both help and hinder our misinformation problem.

In my research group, we combine methods from machine learning, epidemiology, and social psychology to try to observe misinformation in the real world so we can build tools to reduce its impact.

For example, we developed tools for scoring vaccine-related webpages based on their credibility. This was an AI-based approach for spotting specific issues in news articles and blog posts, such as promoting research findings without necessary context or appeals to authority instead of evidence.

In other work, we tried to predict who would end up posting about conspiracy theories on Reddit months in advance. Two users might both start posting comments in r/mylittlepony at the same time but differences in the language they use and the other forums they post to over time can distinguish which of the two will become embedded in the r/conspiracy community discussing Pizzagate and QAnon.

But building AI tools isn’t the same as deploying AI tools, and many have produced unintended consequences when they are actually used. There have been fatal crashes in self-driving cars and implicitly racist decision-making built into criminal justice software.

To make sure the benefits of AI-based misinformation tools outweigh the risks when they are deployed, we would do well to first consider who the tools are designed to help.

Imagine an AI-based appraisal tool that can evaluate the credibility of any webpage by looking at patterns of language, images, and links to other pages. Because it uses the newest algorithms, it can also highlight and annotate the information it used to make its decision.

A tool like this could be used by journalists to check sources (or their own writing), or by curious information consumers who lack the experience or training to judge credibility themselves.

When correcting misinformation on social media, the aim is not to change the mind of the person disseminating misinformation, but to influence the audience watching the conversation. Recent experiments from social psychology designed to mimic online social spaces suggest that responding to misinformation in online spaces can be an effective way to correct beliefs in the audience. Instead of censoring users who post misinformation, we could instead see this as an opportunity to reach audiences who otherwise trust or see value in what those users say.

If correcting misinformation can be a useful way to mitigate its impact on what people believe, then should we deploy an army of social bots to correct misinformation rather than simply removing the misinformation?

Imagine a second AI-based tool that uses information about what people post and who they connect with to predict their beliefs. This is a form of user profiling, pioneered by researchers at Cambridge University who were approached by Cambridge Analytica for access to Facebook data to help target people during elections (and said no).

If this all sounds a little like Big Brother, large tech companies already deploy AI to do targeted advertising. If we can predict whether someone is at high risk of harmful behaviour based on the misinformation circulating in their communities, isn’t targeting them to change their beliefs the same?

These tools are no longer just the topic of 1950s dystopian science fiction. As a computer scientist specialising in machine learning and misinformation, these are the questions that keep me awake at night. I think about the gap between developing new tools and how they could be deployed in society, and I worry about the potential for unintended consequences.

I think AI-based tools could be used to help us deal with our misinformation problem and avoid situations where people end up ingesting fish-tank cleaner or taking a rifle to a pizzeria. But first we need to drop our fixation on blaming and amplifying the people who spread misinformation and instead aim to educate and empower those who are most vulnerable to it.

Originally published by Cosmos as What if instead of blaming readers of misinformation, we showed them how to tell the difference between facts and falsehoods?

Adam Dunn is Director of Biomedical Informatics and Digital Health and Associate Professor in the Faculty of Medicine and Health at The University of Sydney. His research is focused on applications of machine learning in clinical epidemiology and public health.