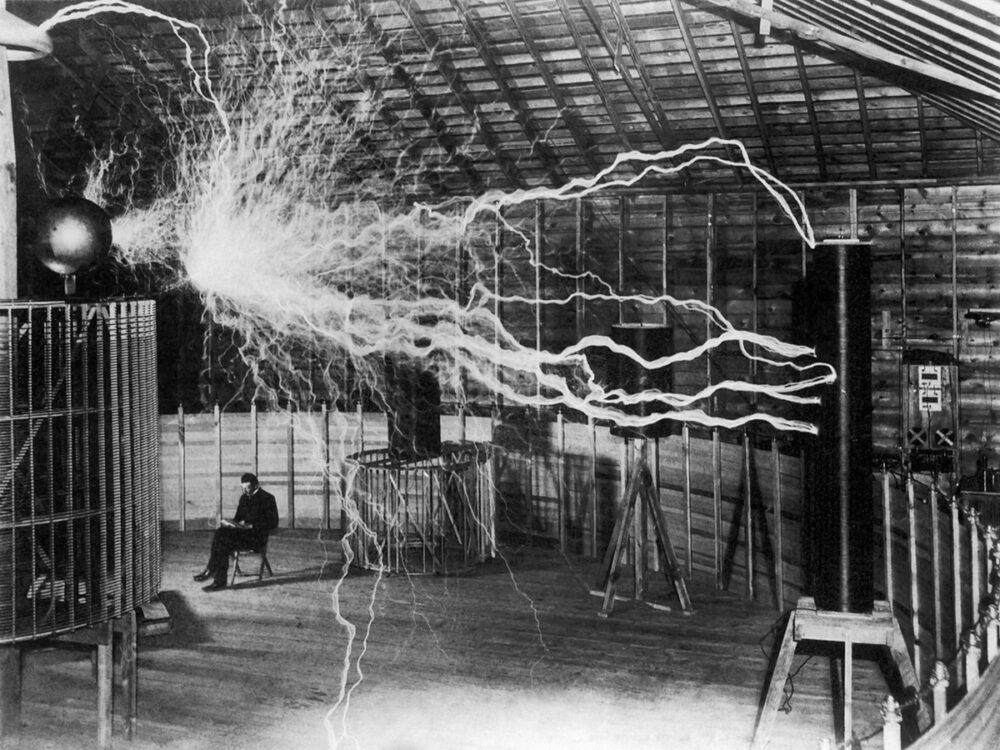 The decisive battle took place in 1893 at the Chicago World’s Fair. On one side, the celebrated inventor Thomas Edison. On the other, his former employee Nikola Tesla.

And what were they fighting over – love, religion, territory? None of the above. They were fighting over alternating current (AC) versus direct current (DC).

A quick explainer: current in metal wires is the flow of electrons, pushed along by a voltage. If the voltage is sourced from a battery, the electrons flow in one direction only. We call this direct current, or DC.

However, batteries are not a primary source of energy. For that, we often use coal or natural gas. Their chemical energy is released in a furnace as heat to create steam that turns the shaft of a generator. In the simplest case, the shaft spins a magnet inside a coil and through the principle of electromagnetic induction produces an electric current. The polarity switches from positive to negative and back many times per second as the generator shaft rotates, thus the current alternates in direction. We call this alternating current, or AC. Even though the direction of the current alternates, its effects do not cancel out. The current does useful things in both directions, such as heating the wires in a toaster.

Starting in the late 1880s, Edison developed a cost-effective means of generating DC electricity, and a suite of related devices, including motors and meters to measure DC energy consumed. However, there was a problem. There was no way back then to convert the DC voltage to higher or lower values. To be safe for use in homes and factories, the DC generators were designed to produce electricity at low voltages. The downside was that this meant the losses during transmission from the generator to the consumer were high. Edison judged that to be an acceptable compromise, but it limited the distance between the generator and consumers to less than a kilometre or two.

In the other camp, Tesla had a secret weapon known as the transformer. It is a simple arrangement of iron cores and copper windings that allows voltage to be converted up or down. The limitation is that transformers only work with AC electricity.

With transformers, Tesla could boost the generator output to thousands of volts for low-loss transmission over long distances then cut the voltage down again to safe values for final delivery to the consumer.

There was a lot at stake, including patent royalties and the right to electrify the cities of the United States. The raging battle was called the War of the Currents.

Feeling the tide of battle swinging against him, Edison changed tactics and launched a misinformation campaign to argue that AC current was dangerous. To prove his point he arranged the public electrocution of stray dogs, cats and horses.

These skirmishes continued during the lead up to the Chicago event, till victory was declared for the Tesla AC camp. They were awarded the contract to electrify the Fair. From there it was all AC, with the definitive stake in the ground being the 1896 electrification of street lights in the city of Buffalo with AC power supplied from hydroelectric generators at Niagara Falls.

AC distribution of electricity has reigned supreme for more than 100 years. But a quiet insurrection is taking place in our midst. Our computers, machines, LEDs and electric cars all run on DC. And at the extremes of high power – distributing electricity thousands of kilometres from one region to the other – engineers have discovered that the losses from a million-volt transmission line are lower if it carries DC current rather than AC current.

Once again, the transformer is the secret weapon, but this time operating on DC. These new transformers take the form of electronic circuits that convert DC currents up and down the spectrum from a few volts to a million or more. Lighter and smaller than traditional ones, DC transformers make it easier to integrate wind and solar electricity into the grid, and they reduce the likelihood of failures cascading from one electricity generation region to another.

In the coming decades, we may see the DC insurrection take hold. Not through warfare this time – I predict no public electrocutions of stray cats. Instead, it will be a subtle, gradual process. But by the turn of the next century Edison may well have the final victory.

This column by Alan Finkel is an excerpt from the next print edition of Cosmos magazine – available in all good newsagents and museums in October.

The story of Tesla and Edison’s battle will also be told in a movie, The Current War, starring Katherine Waterston and Benedict Cumberbatch, that will be in cinemas in time for the holiday season.