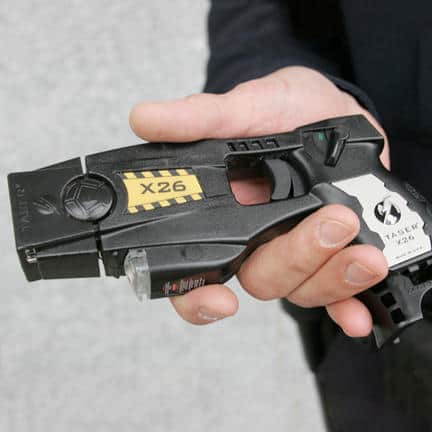 A shock from a Taser stun gun can result in temporary in brain activity similar to dementia, a new study published in Criminology & Public Policy suggests.

The researchers from Drexel University and Arizona State University say this raises questions about how soon police should be allowed to interrogate a suspect after being shocked.

"If suspects are cognitively impaired after being Tased, when should police begin asking them questions? There are plenty of people in prison who were Tased and then immediately questioned," says lead author Robert Kane.

"Were they intellectually capable of giving 'knowing' and 'valid' waivers of their Miranda rights before being subjected to a police interrogation? We felt we had moral imperative to fully understand the Tasers' potential impact on decision-making faculties in order to protect individuals' due process rights."

Despite there widespread use (stun guns are now used in 17,000 police departments in the US alone), little is known about exactly how the shocks affect individuals’ cognitive functioning.

This randomised control trial was conducted at a hospital, with nurses and a physician on hand in case of emergency. The 142 participants were screened for drug use and cardiac and psychiatric problems and then divided randomly into four groups.

Each participant completed a range of cognitive tests – at initial screening, immediately before the trial, immediately after, one hour later and one week later.

The results showed that Taser exposure caused statistically significant reductions in verbal learning and memory. However, the effects were short-term, lasting, on average, less than one hour.

“Tasers are a great alternative to deadly force. When used in lieu of firearms, Tasers can save lives,” said Kane. “But using a Taser is not without risk. Although they are considered safe when used on healthy people, people have died from being Tased. They should be treated as a dangerous weapon.”

See our Cosmos Explainer: How does a Taser work?