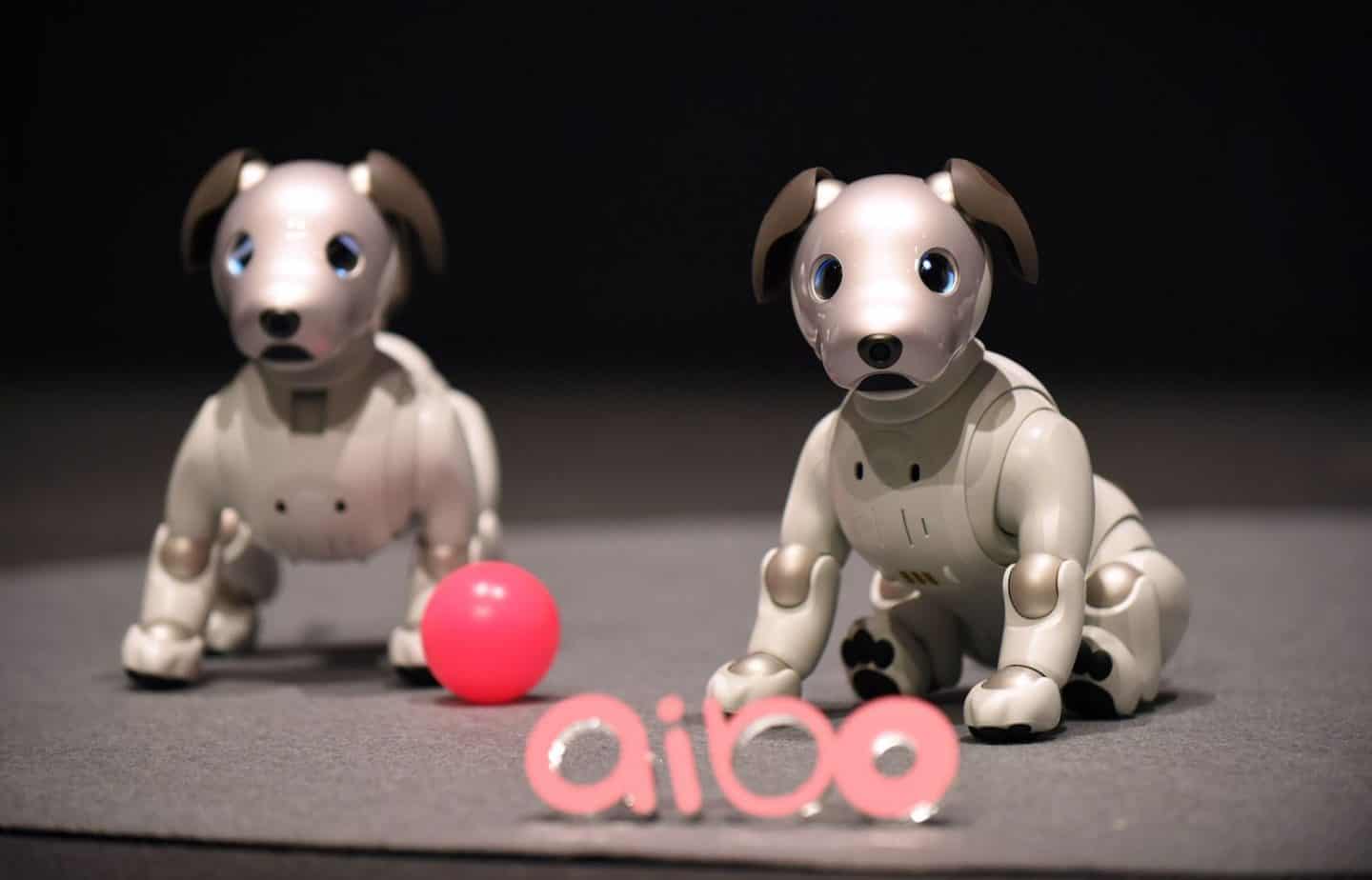 Back in bark: Sony's aibo robotic dog is available again 20 years after it was first introduced. Credit: KAZUHIRO NOGI/AFP/Getty Images

From the pages of science fiction stories, to cinema and television screens, to perching next to us in the workplace, and perhaps, soon, even driving us home from the office, robots have been steadily advancing into our everyday lives.

Now, Guang-Zhong Yang, editor of the journal Science Robotics, and an international team of contributors, have produced a list of 10 exciting recent developments and technologies, ranging from original research that may change the future of robotics to commercial products that enable basic science and drive industrial and medical innovations.

Here, then, are the journal’s Top 10 robotics developments of 2018.

Atlas, from Boston Dynamics, does parkour

The performance of the 1.5-metre tall, 75-kilogram humanoid robot Atlas continues to surprise us; it jumps over a log while jogging, and jumps over wooden boxes with no break in pace. It walks on challenging terrain, keeping its balance when disturbed; stands up; lifts and manipulates objects; and executes a gymnastic backflip.

Boston Dynamics, a US engineering and robotics design company founded in 1992 and headquartered in Waltham, Massachusetts, is a wholly owned subsidiary of the Japanese conglomerate SoftBank Group.

Company founder and chief executive Marc Raibert and his team remain the masters of robotic balance and propulsion. Raibert says “the mechanical system has a mind of its own, governed by the physical structure and laws of physics”.

Parkour is an interesting choice to test Atlas’ abilities. The word, from the French parcours, means “the way through” or “the path”. It started as a French military training program, and is generally defined as the act of moving from point A to point B using the obstacles in your path to increase your efficiency.

Atlas uses its vision system to align itself and to measure distances to the parkour obstacles. Raibert admits that not all trials could be successfully mastered, but he hopes recent demonstrations serve as an inspiration for what robots can do in the near future.

Robotic surgery represents one of the most important medical innovations in recent years. More robotic platforms are emerging, although how widespread their availability and use will be will depend on factors such as cost.

The California-based company Intuitive Surgical, maker of the da Vinci platform, is a pioneer and a global market leader in the field of surgical robotics, and continues to push the boundaries.

The company recently launched its da Vinci single-port system. Through a 2.5-centimetre cannula and small incision, the surgeon can control three fully articulated – as with wrists and elbows – instruments, combined with an endoscope and treat deep-seated damaged or diseased tissues or organs.

A soft robot that navigates by growing

Imagine if the growth of a vine, neuron or fungus filament could be enlarged, sped up, and made steerable. Taking a tube of soft material that is folded inside itself, researchers apply pressure and the tube extends as material at its tip is pushed outward.

This brilliant idea, explored in a paper by researchers led by Elliot Hawkes from the University of California, Santa Barbara, US, considers several grand challenges in robotics and exemplifies the use of bio-inspired design by extracting a general biological principle and using it as an analogy to advance engineering beyond what is possible in nature.

The soft robotic design can avoid obstacles in complex, unstructured environments, which holds promise for navigation in pipes and conduits, medical devices, and exploration and search-and-rescue robots.

One of the main challenges of robotics is to find new materials and fabrication schemes for developing controls and devices that are power-efficient, multifunctional and easily deployed.

In 2018 there were many new developments in this burgeoning research area. Versatile shape-changing liquid crystal mechanisms have been used before, but we’re now seeing how elastomers can be fabricated with 3D printing. This technique was explored by a team led by Arda Kotikian from Harvard University in the US.

These devices have demonstrated the ability to manage significantly more weight than other liquid crystal elastomers previously reported.

The next generation of robots won’t be metallic machines, but instead will be made of soft materials with a wide range of motions that react to applied electricity. They will be able to adapt to dynamic environments and be well-suited to work closely with humans.

Such soft devices can perform a variety of tasks, such as grasping delicate objects and lifting heavy materials.

A central challenge in the field of “soft robotics” is a lack of actuators, or artificial muscles, that can replicate the versatility and performance of the real thing.

One design of soft actuator, known as a Peano-HASEL (the acronym standing for “hydraulically amplified self-healing electrostatic”), is transparent and self-sensing, and highly controllable. It is strong and versatile but reportedly cheap to produce, using inexpensive commercially available materials.

Remarkably, it is able to lift more than 200 times its weight.

Yes, DNA origami is a real thing. The traditional Japanese art of paper folding involves transforming a flat sheet of paper into a finished sculpture without cuts, glue or marks on the paper. Origami practitioners use a just a few basic folds to perform their craft.

These DNA origami structures can be made to be self-assembling, combined with a system of latches formed by single-stranded DNAs, and controlled at precise nanoscale movements under an externally applied electric field.

Such nanoscale robotic systems can be used in groups to electrically drive the transport of molecules or nanoparticles over tens of nanometers or more. The Science Robotics editors point particularly to research led by Enzo Kopperger of Germany’s Technical University Munich.

As with many robots inspired by living creatures, the DelFly Nimble project serves to develop advanced technologies that have practical applications, while also exploring the principles used by nature to build and program living beings.

The Nimble is the latest flying robot from the Micro Air Vehicle Lab, part of the Delft University of Technology, in the Netherlands.

It is remarkable: tailless, untethered, autonomous, programmable, and small – weighing a mere 28 grams. It flies by flapping its two pairs of wings and demonstrates exceptional agility, able to hover, or fly in any direction – up, down, forward, backward or sideways – and can perform a 360-degree roll.

Although it is more than 50 times the size of a fruit fly and does not mimic the wing morphology or kinematics of a specific natural flyer, the robot can serve as a novel physical model to test how flying organisms control their motions.

Surprisingly, the DelFly Nimble can accurately reproduce the rapid escape manoeuvres of fruit flies, even with no explicit control of all its rotation axes.

It is an ideal example of “science for robotics and robotics for science”, say the journal editors, and should advance the development of flying robots.

When it comes to wearing an exoskeleton for everyday life, most people do not want to resemble the Marvel comic-book Iron Man.

Potential applications include assisting the elderly in enhancing their muscular strength, supporting their mobility and independence, and rehabilitating children and adults who have movement disorders caused by infirmities such as stroke, multiple sclerosis or Parkinson’s disease.

The sophisticated application of robotics will also allow each individual wearer to have personalised control over their suit’s physical enhancements.

The journal editors nominate a recent paper from a team led by Ye Ding of Harvard University, US, as important in the field.

Robotic arms from a company called Universal Robots are becoming ubiquitous in a wide range of applications, from research laboratories to industrial assembly lines to surgical guidance.

In 2018 the company, based in Odense, Denmark, launched its e-series of collaborative robots, or “cobots”.

Rather than requiring specialised programming, cobots learn tasks by demonstration, mimicking the motions of users, augmented by touch-pad controls.

The industry expects to see the rapid deployment of more intelligent human-robot interactions in a diverse range of environments, in which the robots seamlessly learn and collaborate with human operators.

Sony’s toy dog, aibo, introduced nearly 20 years ago, has made a welcome return. It has been given a new appearance, enhanced voice understanding, and an improved ability to learn from its owners.

The robot has also benefited from Sony’s increasing awareness of the role robots can play in childhood learning, or as a companion for the aged, particularly those with neurodegenerative diseases.

The ability to adapt to and understand an environment, recognise the needs and expectations of the people around the robot, and develop behaviours and personality traits accordingly – without being dependent on pre-scripted programs – are interesting topics in social robotics.

Related reading: For robots, the future is modular

Originally published by Cosmos as 10 most exciting developments with robots