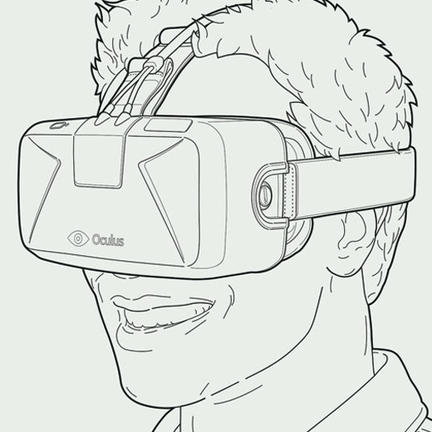 NON-FICTION The Amazons: Lives and Legends of Warrior Women Across the Ancient World by Adrienne mayor

The image fills your peripheral vision by projecting through small, ridged lenses which are a fraction of the size and weight of conventional lenses.

A suite of sensors take more than 1,000 readings every second to update the image in response to even minor movements of your head, eliminating viewer queasiness.

A few metres to my left, the vast bulk of a stegosaurus is munching away on forest undergrowth. I can’t help but duck as its menacingly spiked tail absently sways back and forth. Yet I yearn to lean in and run my hand across the ancient dinosaur’s coarse skin. I’m forced to remind myself that this is only a simulation, albeit an uncannily convincing one.

This is virtual reality brought to life via the second-generation prototype of the Oculus Rift headset. It’s a device designed to trick the senses into believing you’re actually embedded in a virtual world. And it really works.

This sets Oculus Rift – and the next-generation headsets currently being developed by the likes of HTC, Microsoft and Sony – apart from the many virtual reality headsets that have come before it. Most were bulky and uncomfortable. They ran at low resolution, giving an inescapable reminder of the “virtual” in virtual reality. And they often left you feeling queasy, as the images presented to your eyes fight with your other senses – at the expense of your stomach.

The Oculus and its contemporaries look to be a genuine step forward.

While the Oculus still being perfected, it already gives a tantalising taste of our virtual reality future. In fact, it made such a stir when it kicked off its crowdfunding campaign in the United States in 2012 that it raised nearly $2.5 million, 10 times its original target.

Then in 2014 Facebook upped the ante by acquiring Oculus for a tidy $2 billion. Virtual reality is now very big business.

There is no single trick that makes Oculus succeed where so many of its predecessors failed. Instead, it combines a dozen clever innovations. For one, it capitalises on display technology that has advanced in leaps and bounds in recent years, thanks to the billions invested in high-resolution active-matrix organic light-emitting diode (AMOLED) smartphone screens.

The Oculus image jumps off the screen to fill your peripheral vision by projecting through small Fresnel lenses. Originally developed on a larger scale for lighthouses, a Fresnel lens’ ridged design is thinner and lighter than a conventional curved lens, helping to keep the headset small, light and comfortable. And any distortion from the lens-boosted image is corrected with some clever software programmed by one of the luminaries of video gaming, John Carmack, who was behind such groundbreaking 3D games as Wolfenstein and Doom.

A suite of sensors, including a gyroscope, accelerometer and magnetometer, take more than 1,000 readings every second to update the image in response to even minor movements of your head.

This is crucial as the lag between your movement and the pictures’ movement has resulted in the queasiness that until now has been associated with virtual reality devices. The latest prototype even uses an external camera to track your position, allowing you to move around rather than remaining seated. It also includes built-in headphones to further enhance immersion.

Oculus is still trying to push the experience further. In late 2014 it spent some of parent company Facebook’s cash on another virtual reality hardware company, Nimble VR, which makes devices that track the position of your hands and transposes them into the virtual world.

Perhaps the next generation Oculus device may even include gloves that allow you to interact with virtual objects – like a dinosaur.

The most popular application of Oculus to date has been in gaming, with enthusiasts around the world scrambling to buy early prototypes for a taste of what virtual reality has in store. But there are more serious applications as well.

The stegosaurus I met was part of an educational program that takes you on a journey through the history of the Universe.

Facebook is particularly interested in its potential as a communications device; imagine mingling with friends in a virtual club rather than chatting to them over a 2D video link.

And there are professional applications, such as telesurgery or remote instruction.

Oculus is not yet available to the public, but a retail version is expected in early 2016. Rival headsets from Sony and HTC are expected to launch at a similar time.

After decades of false starts, virtual reality is about to become very real.

Originally published by Cosmos as Reality you can virtually touch