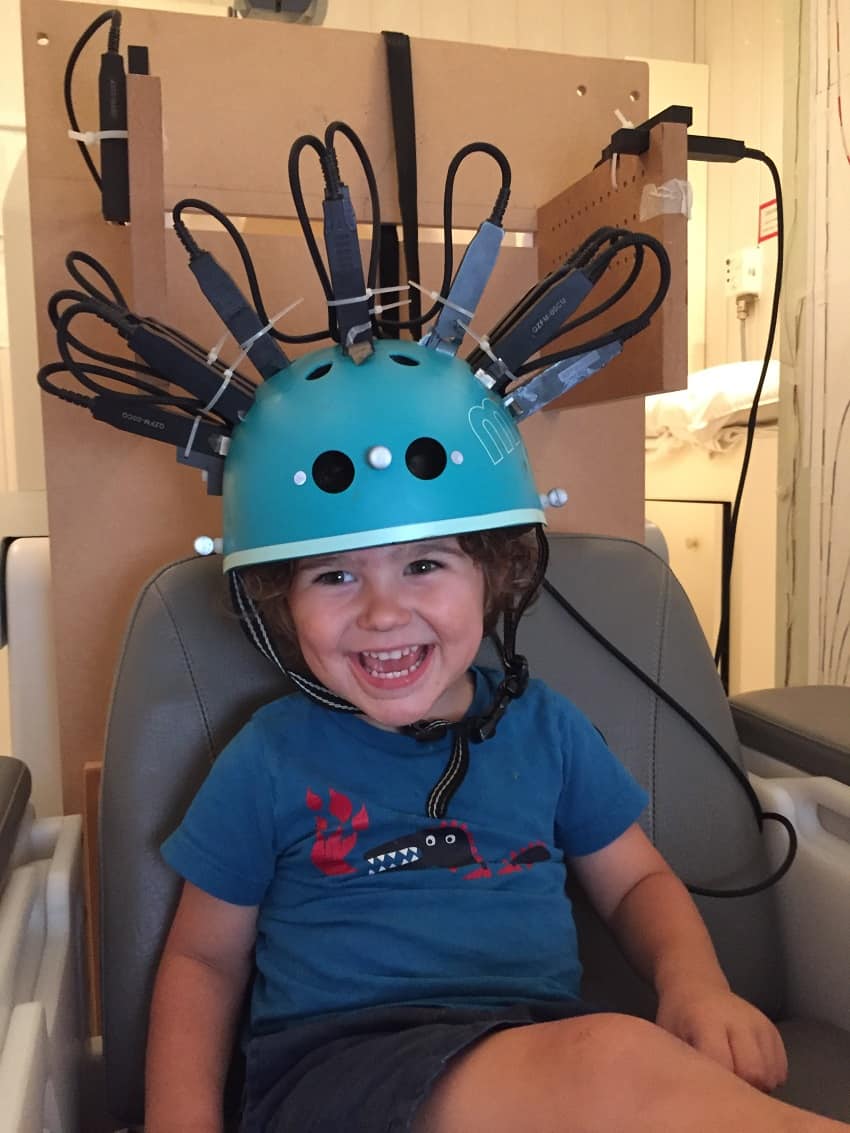 Scientists have shrunk a brain scanner down from a half-tonne monolith and put it in a bike helmet, where it measured the brain activity of a woman playing the ukulele.

The high-tech helmet looks cool and weighs only 400 grams.

That makes it easier to study brain development in young children who used to have to be sedated to undergo the intimidating scans. It also opens a door to new understanding of childhood conditions such as epilepsy and autism.

On top of that, the new wearable tech makes it feasible to scan people who are moving – impossible with older machines that required perfect stillness to avoid image artefacts.

The technique is called magnetoencephalography (MEG) and works by picking up the tiny magnetic fields generated by firing brain cells.

One of the reasons MEG is such desirable kit is that it has “high spatiotemporal resolution”, which means it is very precise about which part of the brain is working and when it clocks on and off.

Until now, though, that valuable info has come at the cost of a big clunky scanning unit that needed the subject to stay statue still. It also used sensors that had to be kept at minus 269 degrees Celsius. That meant housing them in cryogenic canisters.

None of this seems remotely possible in a skater helmet, which makes the current research, led by Ryan Hill from the Sir Peter Mansfield Imaging Centre at the University of Nottingham, UK, all the more ingenious.

Hill and co took advantage of a new sensor called an optically pumped magnetometer or OPM. This guy is light – it weighs in at 20 grams – and, unlike its finicky predecessor, is quite happy to work at room temperature.

First, the sensor can be placed right on the scalp, dropping the distance to the brain cells and ramping up signal strength. Second, it is wearable, in this case as a modish helmet, and so can register brain activity during movement.

The team tried out the helmet on a 14-year-old girl shooting arrows in a Robin Hood video game. Then they put it on a 24-year-old woman who’d never picked up a ukulele and asked her to learn five chords.

During both tasks the system logged accurate signals from the part of the motor cortex that controls the hand.

All of that was despite the fact subjects were moving their heads – the ukulele player, for example, tilted her head seven centimetres and rotated it 30 degrees to see the chord diagrams, her hands and the frets on the instrument. {%recommended 9953%}

Perhaps the major finding, though, was when they put the helmet on two children, aged two and five, and picked up brain signals as their hands were stroked by their mums.

Kids don’t like big scary machines and are prone to fidgeting, so most would have to be sedated for a similar test in a traditional MEG scanner. Factor in the risk of an anaesthetic and a lot of studies using MEG in kids just don’t get done.

“The foundations for human cognition are laid down in the first decades of life, but there have always been limited ways to study them due to restrictions in brain scanning technology,” says Hill.

“[T]he large traditional fixed scanners have always required patients to stay completely still. Not only does this fail [to] give an accurate picture of the brain operating in a natural environment, but it also places severe restrictions on who can be scanned, with children representing the biggest challenge,” he says.

Study co-author Matthew Brookes, who heads up MEG research at the University of Nottingham, says, “The challenge now is to expand this further, realising the theoretical benefits such as high sensitivity and spatial resolution, and refining the system design and fabrication, taking it away from the laboratory and towards a commercial product.”

The study appears in the journal Nature Communications.