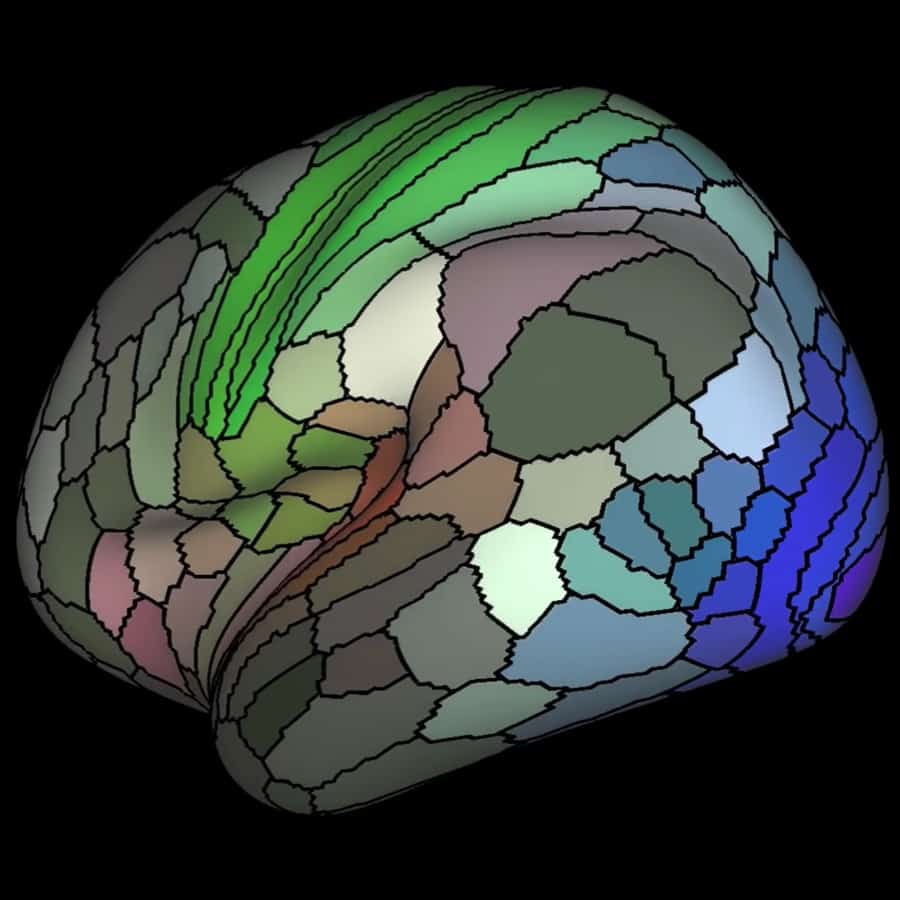 A new map of the brain based on scans of 420 people has defined 97 new functional parts of the cortex – the wrinkled grey outer shell – more than doubling previous tallies.

The atlas and software, produced by researchers in the US and the Netherlands, combines different imaging and measurement techniques to assign each cortex area a “fingerprint” based on architecture, cell type and function.

Mapping the human brain is a centuries-old exercise. The problem is everyone’s brain is unique.

Until recently, the best scientists could do was assign brain regions by, for instance, cell type. They dissected brains were examined under a microscope and saw different areas of our convoluted grey matter are made of different cells – such as pyramidal cells, which have a distinct pyramid-shaped body, and horizontal cells – and constructed maps based on those.

Then came non-invasive imaging technology – such as magnetic resonance imaging (MRI), which snaps “slices” through the brain based on, for instance, blood flow.

But comparing MRI maps and cell-type atlases was shaky at best. Each technique picked out certain brain areas but missed others.

Study lead author Matthew Glasser from Washington University likens the old microscope-based techniques as ground-based telescopes, “which produced relatively blurry images of the sky before the advent of adaptive optics and space telescopes”.

MRI – Glasser’s space telescope – isn’t only used in diagnostics or to determine what parts of the brain do what, as is in the case of functional MRI (fMRI) where blood flow is tracked to see which bits of the brain are being used during mental tasks.

Their software picked out various brain areas 97% of the time, despite individual variability.

There are many other “modalities” such as diffusion MRI, which tracks the movement of water in the connective cables of nerve cells intertwined in and between the brain’s hemispheres.

Glasser and his colleagues thought to combine many different modalities with fMRI, such as mapping the density of insulating myelin sheaths which beef up cortical thickness and resting-state fMRI, which details connectivity between neurons within and between regions.

So using brain scans of 210 healthy young people from the Human Connectome Project in the US they mapped each person’s cortical architecture, activity, connectivity and topography.

Software developed by the team churned through the data and assigned each part of the brain a fingerprint of sorts, depending on its combination of features.

For instance, areas 3a and 3b of the somatosensory cortex, which processes information about touch and pain, can be differentiated by their level of myelination, but not resting-state fMRI.

Amazingly, they identified 97 new areas in addition to the 83 already reported.

The researchers then cross-checked and confirmed their findings with another cohort of 210 people. Their software picked out various brain areas 97% of the time, despite individual variability.

National University of Singapore’s Thomas Yeo and Simon Eckhoff from Germany’s Heinrich-Heine University write in a News and Views article that there are three advantages to the new mapping software techniques over any other: it reveals new borders between areas that might be missed in a single modality, reduces noise and better equips researchers to describe properties of each region.

This could have huge implications for diagnostics: “It is now up to researchers to use this anatomical framework provided, compare it with alternative approaches to mapping the human brain, and populate the defined areas with functional and disease-related information.”