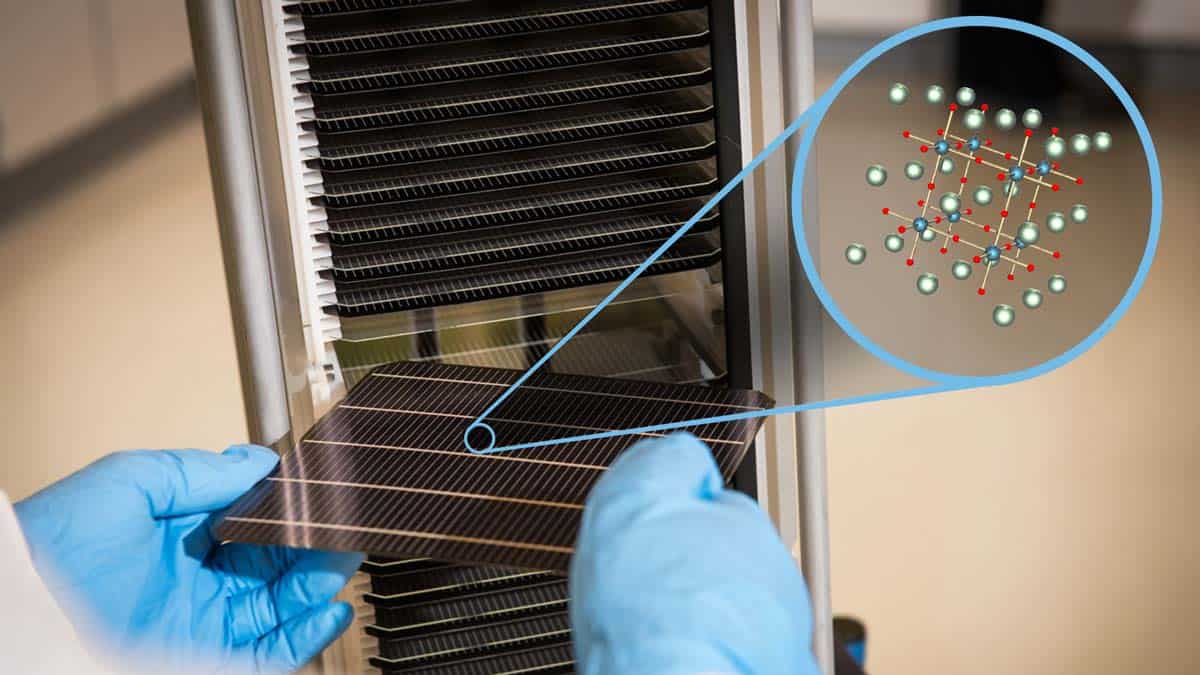 As the carbon-emissions clock winds down to 2050, the race is on to get perovskite solar cells into the market.

The technology of perovskite solar cells might be young, but predictions are that it’s almost ready to bust out of the lab and revolutionise the photovoltaic industry.

Just 12 years after the first research into the use of perovskite in solar cells, the International Technology Roadmap for Photovoltaic – a projection of technologies published by the German Mechanical Engineering Industry Association (VDMA) using data from photovoltaic experts – has forecast that the material will be in commercial use in photovoltaic cells by 2025.

It’s a timeline that Dr Greg Wilson, site leader at the CSIRO Energy Centre in Newcastle, NSW, says is realistic.

“I’d follow the pundits and the roadmap when they say an introduction for a commercial product is somewhere around 2025,” he says. “It’s early days for it to be commercialised, but it’s doing very well in terms of R&D and the potential for commercialisation given [the technology] is just 12 years old.”

There are others with bolder projections, including Henry Snaith, one of perovskite cells’ development pioneers. A professor of physics at the University of Oxford, UK, Snaith founded Oxford PV in 2010, just a year after researchers first trialled perovskite solar cells. Oxford PV is considered a world leader in the development of perovskite cells, and it will likely be among the first companies to have cells to market.

“There are a number of companies working on slightly different applications of perovskites in photovoltaics,” says Snaith. “At Oxford PV, we’ve been running a pilot line for the last few years proving out the technology and getting it ready for high-volume manufacturing.

“We have built out a first-of-a-kind perovskite-on-silicon production line, with an initial annual production capacity of 100 megawatts. The plan is to have this line operational next year, with initial volumes of commercial cells and modules entering the market in 2022.”

Whether these bold new solar cells hit markets next year or in 2025, there’s agreement among experts that they will transform solar panels.

The first research on perovskite solar cells was undertaken in 2009 by Japanese engineer Tsutomu Miyasaka and colleagues. They created a cell with a power conversion efficiency of just 3.8% – a modern silicon solar panel has an average efficiency of around 20%.

What’s transpired since has been nothing short of meteoric, with perovskite efficiency levels recently reaching a record mark of around 24% – surpassing a level of efficiency that silicon took more than four decades to attain.

Snaith, who was instrumental in the early gains in efficiency, describes that advance as “unbelievable”. Professor Anita Ho-Baillie, the John Hooke Chair of Nanoscience at the University of Sydney, was another who witnessed the sudden rise of perovskites as a solar-cell option.

“I got interested in around 2013,” she says. “At the time, there were 80 papers on perovskites. I read every single one of them.

“Now there’s tens of thousands of papers on perovskites. Everybody who’s involved in solar-cell research would have some sort of equipment or lab doing a little bit on perovskites.”

When perovskites enter the market, they will do so as tandem, or double junction, solar cells, with a thin layer of perovskite cells coated atop silicon cells, effectively super-charging traditional solar panels.

While silicon cells have a thermodynamic limit – the maximum efficiency they can achieve – of around 29%, the two layers in a tandem cell can combine to break through what Wilson describes as the “magical 30% power-conversion efficiency barrier”.

“When you take this perovskite material, which absorbs a different part of the light spectrum than silicon, and you put it on top of silicon, it filters out some photons of light and converts that to electricity,” he says. “The other photons that it doesn’t absorb go through that material into the silicon. And that also produces electricity.

“When you go to a double junction, that thermodynamic limit goes to 39%. So that’s the new benchmark with the perovskites on silicon.”

The benefits to consumers come in another form of efficiency: cost. Perovskite cells are cheap to manufacture, so should add little to the price of solar panels.

“All we’re looking at doing is putting a perovskite coating on top of those silicon wafers,” says Wilson. “We think that’ll have minimal cost and a very small amount of new equipment. We anticipate that for less than a 10% increase in the cost of the module, you’ll get a 30% gain of electricity.”

The environmental benefits of perovskite cells flow off the back of this economic benefit. In effectively reducing the cost of electricity generation, the tandem cells should encourage an even greater uptake of solar panels. The higher power generation of tandem cells – and the reduced resources required to manufacture perovskite cells – will also help offset the high carbon cost of producing silicon for solar cells.

“It’s a self-assembly process. You just put the chemical precursors onto a piece of material that you want to become a solar cell, and you heat it at around 100°C to 200°C, which is a lot lower than for silicon, and it will become a photoactive material.”

The flexibility of the perovskite cell layer, which is a fraction of the width of a silicon cell, opens up exciting possibilities for their potential application, including inserting cells between the panes of double-glazed windows.

CSIRO, for instance, has succeeded in produced semi-transparent perovskite solar cells that generate electricity while allowing light to pass through – they have shown a conversion efficiency of 17%. Others have touted using perovskites to create the likes of unbreakable phone screens that may also have solar-charging capabilities.

As perovskite solar cells approach commercial reality, the lingering questions surround their stability and durability. Silicon solar panels typically last for around 25 years, while in the early years of their development, perovskite cells often began to degrade after a few minutes. They’re sensitive to moisture and oxygen, and finding ways to stabilise them – and thus extend their durability – has been one of the great quests for researchers.

“There’s quite a lot of research into stabilising the materials,” says Ho-Baillie. “It doesn’t like moisture, and when heat and sunlight are involved that can make it worse.

“One of our research [projects] is looking at stabilising them. We’re finding out how it degrades, and as soon as you understand what triggers the degradation, you can develop ways to protect it.”

Wilson says the advances in the durability of the cells have been significant. “It’s much better than it was a decade ago – it’s getting towards the requirements to meet international standards. There are many scientific reports that demonstrate that these are durable and they’ll meet these 20-year lifetime periods.”

At Oxford PV, Snaith is so confident in the perovskite cells the company plans to take to market next year that he predicts them matching the lifespan of existing solar panels.