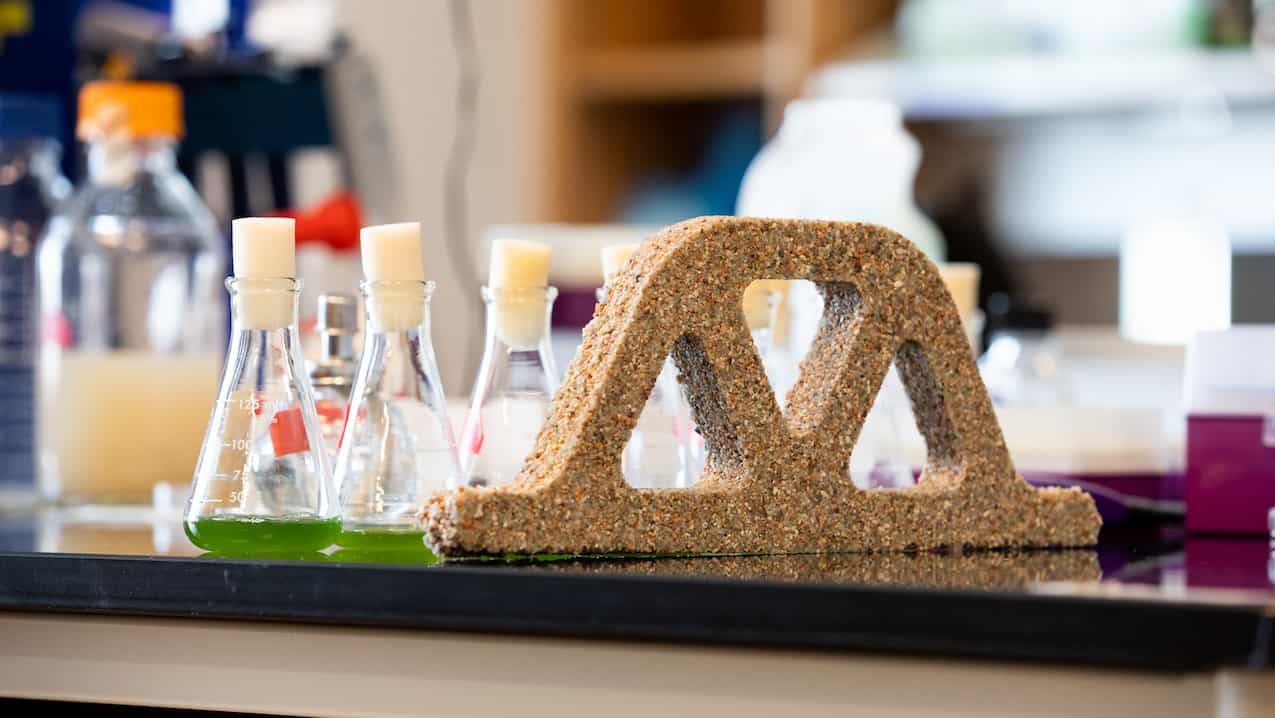 Living building materials can be sculpted into a range of shapes and sizes, researchers say. Credit: CU Boulder College of Engineering & Applied Science

US researchers have created what they call a living concrete by combining sand and bacteria.

It’s early days, but the potential, they say, is to create building materials that can repair and even replicate themselves – with the all-important modern add-on of being greener (in this case literally) than more traditional means.

It’s not a completely new idea. Cosmos has previously reported on proposals by a Dutch team in 2015 and US researchers in 2018 to create self-healing concrete by adding mineral-excreting bacteria or fungus to the mix.

A team from the University of Colorado at Boulder has taken things further, however, even dreaming of a future in which suppliers mail out sacks of desiccated ingredients for making living building materials. Just add water, then grow and shape your own microbial homes.

Writing in the journal Matter, Wil Srubar and colleagues describe how they created a scaffold out of sand and hydrogel for the bacteria to grow in. The hydrogel retains moisture and nutrients for the bacteria to proliferate and mineralise, a process similar, they say, to the formation of seashells in the ocean.

They thus created a living material that, in the right conditions, demonstrates similar strength to cement-based mortar.

“We use photosynthetic cyanobacteria to biomineralise the scaffold, so it actually is really green. It looks like a Frankenstein-type material,” says Srubar, who runs the University’s Living Materials Laboratory.

“That’s exactly what we’re trying to create – something that stays alive.”

By splitting the brick in half, the bacteria can grow into two complete bricks with the help of some extra sand, hydrogel and nutrients. The researchers demonstrated that one parent brick could reproduce up to eight bricks after three generations.

The immediate practical upside – potentially – is that producing concrete in the usual way produces quite a lot of CO2 emissions. Growing it doesn’t.

It’s not all straightforward, however. One complexity is that the bricks need to be completely dry to attain the maximum structural capacity, and thus strength, but drying stresses the bacteria and compromises its viability.

And cyanobacteria need humid conditions to survive – which they’re not going to get in more arid regions of the world.

Nonetheless, Srubar thinks he and his colleagues are onto something.

“We are just trying to bring building materials to life, and I think that is the nugget in this whole thing,” he says.  “We’re just scratching the surface and laying the foundation of a new discipline. The sky is the limit.”

Srubar envisions introducing bacteria with different functionalities to the material platform to create new materials with biological functions, such as ones that sense and respond to toxins in the air.

Other applications might include building structures where there are limited resources, such as in the desert or on another planet.

“In austere environments, these materials would perform especially well because they use light from the sun to grow and proliferate with very little exogenous material needed for their growth,” says Srubar.

“It’s going to happen one way or another, and we’re not going to be trucking bags of cement all the way to Mars. I really do think that we’ll be bringing biology with us once we go.”

Originally published by Cosmos as How to create living concrete