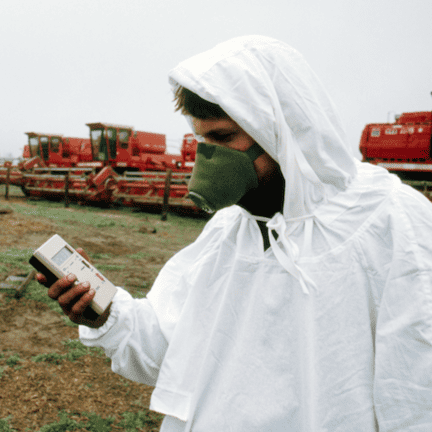 Ingredients for "dirty bombs", which use conventional explosives to blast radioactive materials over huge swaths of land, can be detected using lasers, a trio of physicists in the US claim.

The University of Maryland's Joshua Isaacs and colleagues reported their device, which may uncover a nuclear threat hundreds of metres away, in the journal Physics of Plasmas.

Millions of nuclear sources – radioactive materials sealed in containers – are used in hospitals, for industrial imaging and in academic research worldwide. But they're not all accounted for all the time. In the US alone, one nuclear source is lost or stolen every day.

Thousands of such "orphan" sources are estimated to be scattered around the world and could be used to build a dirty bomb.

In Russia, Chechen separatists twice (in 1995 and again in 1998) constructed dirty bombs, though neither were detonated. And even though no dirty bomb has ever been used to date, they have the potential to inflict long-lasting damage on the region.

The radiation wouldn’t make the explosion itself any more lethal. But it would need a costly clean-up, with contaminated buildings torn down and soil dug up and carted away.

Beyond the environmental and economic impact, a dirty bomb would play on fears of nuclear radiation, psychologically tainting the target zone many years after the radiation had dissipated.

At the moment, the conventional method to track down radioactive materials is using a radiation detector such as a Geiger counter. But they only work within a range of a few metres.

So Isaacs and colleagues explored long-distance tell-tale signs of a hidden dirty bomb.

Some radioactive materials, such as cobalt-60 and isotopes of polonium, emit gamma-rays. These collide with air molecules around them and create a cascade of electrons.

In turn, these electrons seek out and cling to oxygen molecules, "ionising" them. In other words, any material containing those radioactive sources will be enveloped by a cloud of oxygen ions. And the new detection technology, developed at the University of Maryland, hinges on revealing this ion cloud.

The combination makes any oxygen ions spark like a miniature crackle of lightning. The sparking air acts like a mirror to the laser, reflecting the pulse back to the detector and indicating the presence of nuclear material.

Using this technique the team calculates it could detect 10 milligrams (one one-hundredth of a gram) of cobalt-60 from several hundred metres away. This is a much smaller amount than needed for an effective dirty bomb.

So how long until security forces at transport hubs are zapping us with lasers to probe our luggage?

Probably not soon. Currently, the technique only works for gamma-ray emitting materials. Other types of radiation, such as alpha or beta radiation, have too short a range to be detected. The concept also requires a clear line-of-sight towards the suspect which may limit its usefulness.