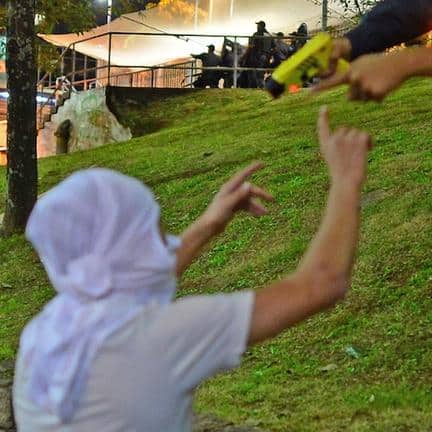 Less-lethal weapons such as pepper spray and rubber bullets have become commonplace with law enforcement officers around the world.

But perhaps the most ubiquitous is the Taser, an electro-shock weapon named after its manufacturer, which uses a combination of gas propellant, electricity and simple science to immobilise a suspect.

The Taser is made of two primary components: the main assembly holds the trigger mechanism, grip, laser sights and battery, while the cartridge contains barbed electrical wires and gas propellant.

The main assembly is the re-usable part of the Taser, needing only replacement batteries. The battery itself is quite small and fits inside the grip. Despite its small size it generates 50,000 volts every five seconds when the Taser is fired.

Considering a standard Australian power socket delivers 240 volts, you might think a Taser would kill the person on the receiving end.

But because the voltage is delivered as a quick blast at low current, and only on the skin and muscles, it drastically lowers the chance of death or serious injury.

Also attached to the main assembly is the trigger.

As the firing pin in a gun ignites gunpowder to propel a bullet, the pin in a Taser strikes a gas canister, releasing a powerful jet of compressed gas.

But unlike a gun, the gases do not shoot out the front of the Taser. Instead, the barrel forks and the pressurised gas travels down two separate channels. A cylinder with a small barb attached at one end and a wire on the other – called a probe – is nestled against a protective door at the end of each channel.

As the gas hits the cylinders, it blows away the doors and propels the probes up to six metres.

The barbs can pierce clothing. Once they’re in contact with skin, an electrical shock can be administered through the wires, which are unfurled as the probes shot out.

The electrical blast from the Taser overrides electrical signals produced by the target’s muscles, effectively immobilising them.

The gas canister, wires and probes are all contained in a cartridge that clips onto the front of the Taser. While each canister can only be used once, they are quick to change.

Officers can aim using fixed sights and a laser sight, usually attached to the bottom of the main assembly.

Originally published by Cosmos as How do Tasers work?