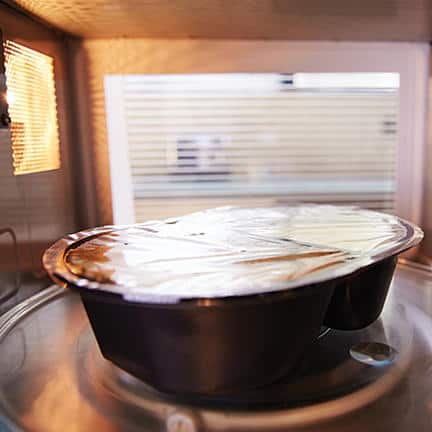 Our microwave oven is a much appreciated companion, but some of our friends regard the microwave as a health hazard. They have banned them, convinced these appliances cause cancer and sterility.

Are their fears rational? No. Logic dictates that safety concerns should be based on at least one of two considerations. There should be a hypothesis for how the appliances might be harmful, or there should be evidence of harm, or both.

To start, you need to understand how microwave ovens work. Inside the oven an electric circuit known as a magnetron generates radio waves at 2.45 billion oscillations per second. A radio wave is technically known as an electromagnetic wave, consisting of oscillating electric and magnetic fields. The magnetic field is irrelevant because there are no magnetic particles in the food. But water molecules in the food respond to the electric field because they carry a positive charge at one end and a negative charge at the other. Rotated by the oscillating electric field they bump into other molecules and transfer their kinetic energy, heating up your soup or leftovers.

The power levels are high: a typical microwave oven concentrates hundreds of watts into the food, heating it quickly.

Is there a hypothesis for how microwaves might cause harm? Some people suspect microwaves will leak from their oven and damage their DNA, causing genetic mutations that could lead to cancer. Others believe the food itself will be altered and become carcinogenic. They are aware that microwaves are a type of electromagnetic wave, as are light and X-rays. They think  if X-rays are harmful isn’t it likely that microwaves are too?

Here we come to the crux of the matter. X-rays and microwaves have different effects on food and on humans.

X-rays oscillate more than a billion times faster than microwaves and their wavelengths are more than a billion times shorter. At these extremely short wavelengths X-rays act like tiny bullets and if they hit the DNA inside the nucleus of a cell they can do permanent harm. Microwave radiation is at a much lower frequency and the wavelength is about the length of a toothbrush, millions of times bigger than the cell nucleus. These big radio waves pass around our tiny DNA molecules without them noticing each other.

By analogy, if you were in a rowboat far from land, X-rays would be like powerful waves that could potentially capsize your boat, while microwaves would be like the rising and falling of the tide of which you would be blissfully unaware.

The only way that microwaves can be harmful to your body is if you are exposed to them at great strength – enough to cause your body temperature to rise dangerously. This could happen if you were somehow squeezed inside the oven, but if you remain outside the oven with the door closed the microwave power you feel is essentially zero. When the oven is switched off the microwaves cease to exist and no trace of them remains in the food.

So there is no hypothesis for a mechanism by which microwave ovens might inflict harm.

But is there evidence of harm? No.

The World Health Organisation reports that more than 25,000 research articles have been published in the past 30 years on electromagnetic radiation at the frequency of microwave ovens, mobile phones and power lines.

They conclude there is no evidence to confirm any adverse health consequences from exposure to these electromagnetic fields.

The most immediate risk to humans from a microwave oven comes from being scalded by extremely hot food or steam when taking heated food out of the oven.

Not all devices that emit electromagnetic radiation are benign. Tanning solariums are a nasty example. Here the hypothesis for harm is clear, because ultraviolet light emitted by the solarium lamps is an electromagnetic wave whose very short wavelength is capable
of penetrating cells and damaging their DNA. The evidence for harm is also clear, with health authorities reporting that exposure to ultraviolet light is responsible for nearly all skin cancers. Solariums should be banned.

In summary, when it comes to microwave ovens there is no hypothesis for harm, there is no evidence for harm and there are plenty of benefits.

There are lots of scarier things in our houses to worry about: about 700 people die in England every year from falls on stairs.