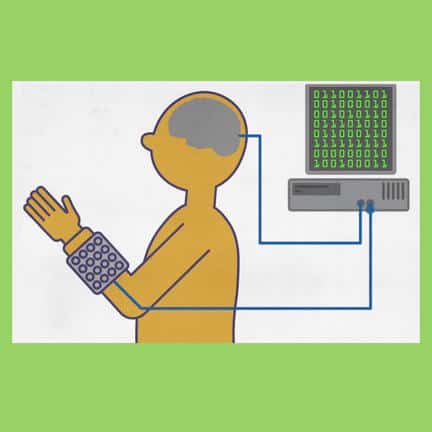 A patient with quadriplegia has regained the ability to perform detailed tasks with his hand, according to world-first research from the US.

Ian Burkhart, 24, who has paralysed arms and legs from a diving accident, was successfully able to move his fingers, hand and wrist using signals recorded from his motor cortex.

The motor cortex is a part of the brain that sends messages telling our muscles to move. Millions of people around the world live with the effects of some form of paralysis, which disrupts these messages.

With the aim of helping these people with day-to-day tasks, a research team from Battelle Memorial Institute and Ohio State University developed an implantable device called NeuroLife, which essentially recreates the disrupted messages from the brain to the paralysed area.

The signals to the muscles are recorded by a small computer chip that was implanted in the motor cortex of the patient in 2014.

When the chip picks up signals, the activity is decoded using a series of algorithms. The signals are then recreated using an electric stimulation sleeve, which sends new messages to the paralysed area.

“We’re showing for the first time that a quadriplegic patient is able to improve his level of motor function and hand movements,” said Ali Rezai, a neurosurgeon at Ohio State’s Wexner Medical Center and co-author of the study.

The patient first showed he could use the technology in 2014 when he was able to open and close his hand.

Building on that event, the researchers worked to replicate the complex series of signals required to perform more detailed tasks, such as grasping, moving and releasing objects.

According to the most recent results, published in the journal Nature, the participant successfully moved separate fingers, as well as performing six different wrist and hand motions, allowing him to pick up a bottle and stir liquid with a spoon.

With more research, the team hopes their discoveries will eventually be used to assist patients living with the effects of paralysis. “We're hoping that this technology will evolve into a wireless system connecting brain signals and thoughts to the outside world to improve the function and quality of life for those with disabilities,” says Rezai.

“One of our major goals is to make this readily available to be used by patients at home.”

Jerry Mysiw, chair of the Department of Physical Medicine and Rehabilitation at Ohio State University, says the research is significant.

“In the 30 years I’ve been in this field, this is the first time we’ve been able to offer realistic hope to people who have very challenging lives.”