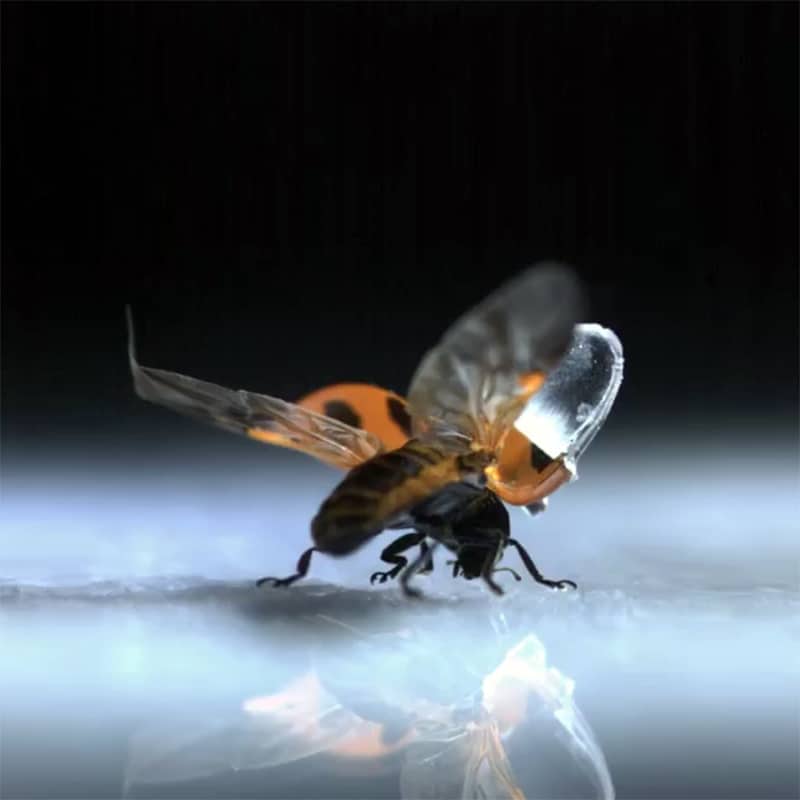 Beneath its distinctively patterned forewings, the ladybug guards a triumph of natural design that could revolutionise, among other things, the construction of umbrellas. The hardened front wings, known as elytra, protect the bug’s soft hindwings, which are both supple enough to be furled for compact storage, and rigid enough when unfurled to give the insect the power of highly manoeuvrable flight.

While researchers have had an inkling of how the ladybug’s hindwings unfold and fold, deduced from origami-like creases on the wings, the exact process has been hidden by the fact the bug carries out that operation under the cover of its closed elytra; and because the elytra are an intrinsic part of the unfolding/folding process, scientists could not simply remove a bug’s forewings to study the hindwings.

To see what lies underneath, a Japanese research group, led by Kazuya Saito of the University of Tokyo’s Institute of Industrial Science, has replaced one of a ladybug’s elytra with a transparent prosthetic, made from a resin often used in nail art.

Then, using high-speed cameras, they observed how the ladybug uses the edge and lower surface of its forewings, whose curvature matches the shape of the hindwing veins, to fold the wings along their crease lines, while using abdominal thrusts to pull the hindwings into their dorsal storage space.

Microscopic computed tomography (CT) scans also showed how the curvature of the veins helps support the wing structure, similar to the curve of a carpenter’s measuring tape.

The research is published in Proceedings of the National Academy of Sciences.

“The ladybugs’ technique for achieving complex folding is quite fascinating and novel,” Saito says, “particularly for researchers in the fields of robotics, mechanics, aerospace and mechanical engineering.”