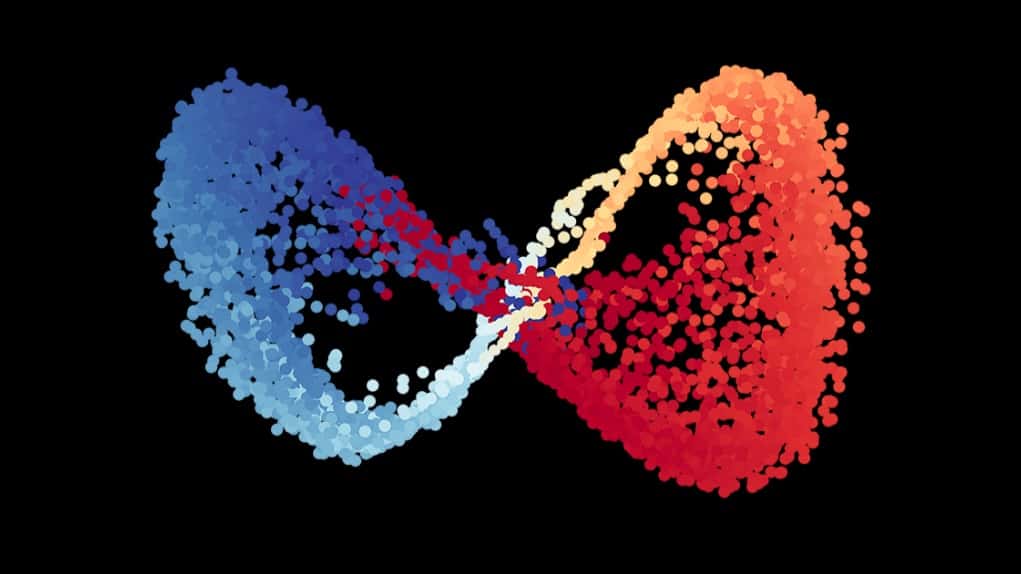 An artificial intelligence tool has examined physical systems and not surprisingly, found new ways of describing what it found.

How do we make sense of the universe? There’s no manual. There’s no prescription.

At its most basic, physics helps us understand the relationships between “observable” variables – these are things we can measure. Velocity, energy, mass, position, angles, temperature, charge. Some variables like acceleration can be reduced to more fundamental variables. These are all variables in physics which shape our understanding of the world.

These variables are bound together through equations.

Albert Einstein’s most famous equation, E = mc2, summarises the relationship between the variables energy (E) and mass (m), using the constant: the speed of light (c). In fact, all of Einstein’s very complicated Theory of Special Relativity can be reduced to relationships between three variables: energy, mass and velocity.

There’s nothing sacred about our choice of variable. The variables and mathematics we choose have stood the test of time as the ones that make sense for a given theory or physical system.

But, what if we were to find other physical variables to solve the same problems? It wouldn’t change the problem… or the solution. But it might give us new insights into the inner workings of the universe and accelerate scientific discovery.

Read more: Machine learning identifies the origin of the most famous Martian meteorite to land on Earth

Now, an artificial intelligence (AI) tool developed at Columbia University in New York has done just that. The results of the experiments are published in Nature Computational Science.

Roboticists at Columbia Engineering developed an AI program to review raw video data and search for the minimal set of fundamental variables that fully describe the observed physical dynamics of the system the swinging of a pendulum.

To test their AI, the team first showed the tool videos of a phenomenon for which they already knew the answer.

Double pendula can be described with exactly four “state variables” – the angle and angular velocity of each of the two arms. After staring at the videos for a few hours, the AI gave its answer for the number of variables in the system: 4.7.

“We thought this answer was close enough,” says senior author Hod Lipson, director of the Creative Machines Lab in Columbia University’s Department of Mechanical Engineering. “Especially since all the AI had access to was raw video footage, without any knowledge of physics or geometry. But we wanted to know what the variables actually were, not just their number.”

So, the next challenge was to try and visualise the variables that the AI had identified. This was not easy as the program does not describe the variables in language intuitive to humans. The researchers did, however, correlate two of the variables to the angles of each pendulum’s arm.

“We tried correlating the other variables with anything and everything we could think of: angular and linear velocities, kinetic and potential energy, and various combinations of known quantities,” explains lead author Boyuan Chen, now an assistant professor at Duke University. “But nothing seemed to match perfectly.”

Boyuan Chen, now an assistant professor at Duke University says the team tried correlating other variables with anything and everything they could think of: angular and linear velocities, kinetic and potential energy, and various combinations of known quantities. “But nothing seemed to match perfectly.”

Confident that the AI’s good predictions of the dynamics of the system meant it found a valid set of four variables, the team was puzzled as to what the others might be.

“We don’t yet understand the mathematical language it is speaking” Chen says.

Still, the AI returned good calculations on other physical systems with known solutions.

Already confused, what would the team have to lose by showing the AI something for which there isn’t a known answer?

The researchers wonder if the sets of variables were different every time the program was restarted, or if it was finding the same unique set of variables for each system.

“I always wondered, if we ever met an intelligent alien race, would they have discovered the same physics laws as we have, or might they describe the universe in a different way?” asks Lipson. “Perhaps some phenomena seem enigmatically complex because we are trying to understand them using the wrong set of variables.?”

In the experiments, the number of variables remained unchanged, but the specific variables varied each time the AI restarted. This indicates there are alternative ways to describe the systems – and by extension the universe – and it’s possible that our choices aren’t perfect.

Such AI tools may help scientists grasp complex phenomena which eludes current theoretical understanding. “While we used video data in this work, any kind of array data source could be used – radar arrays, or DNA arrays, for example,” explains co-author Kuang Huang.

Lipson argues that scientists may be misinterpreting or failing to understand many phenomena simply because they don’t have a good set of variables. “For millennia, people knew about objects moving quickly or slowly, but it was only when the notion of velocity and acceleration was formally quantified that Newton could discover his famous law of motion F = ma.”

Similarly, the variables of temperature and pressure needed to be described before the laws of thermodynamics could be formalised. The same is true for any scientific theory – to develop a theory, you need the variables first. “What other laws are we missing simply because we don’t have the variables?” asks co-author and mathematics professor Qiang Du.