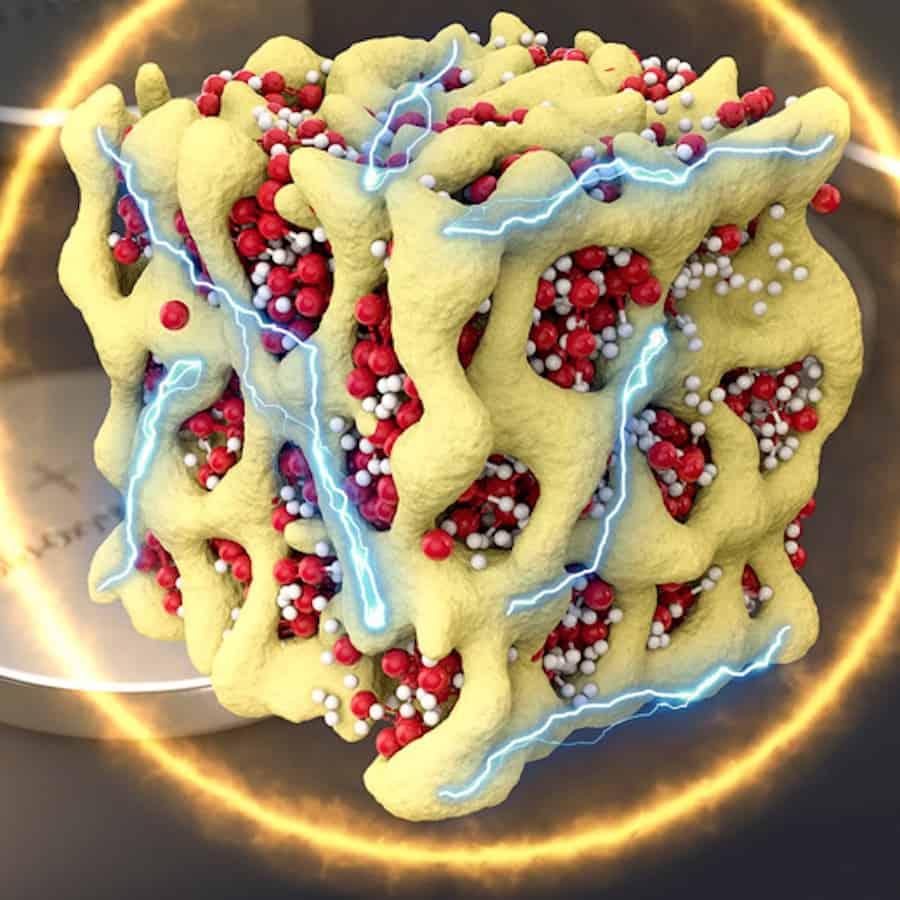 A new, scalable lithium-air battery that lasts longer and is more energy efficient than current models has been developed by researchers in the US and China.

Massachusetts Institute of Technology’s Zhi Zhu and colleagues unveiled the chemistry of their “nanolithia cathode battery” – which does away with many drawbacks of conventional lithium-air batteries while retaining performance – in Nature Energy.

You may have heard of lithium-ion batteries – you’ll find them in your portable electronics, for instance. But what about lithium-air?

Typical lithium-air batteries, when charging, split lithium peroxide (Li2O2) at the cathode terminal into lithium ions – atoms with an electron knocked off – and oxygen. The oxygen gas is released into the air while the lithium ions travel through (usually liquid) electrolyte to the opposite (anode) terminal.

When power is needed, the opposite reaction takes place. Lithium ions travel back to their original terminal and combine with oxygen gas (O2) which is pumped in from the outside air.

They’re also quite light for their storage capacity, making them attractive additions to electric cars.

There are a few problems with the design, though. The batteries’ output is more than 1.2 volts lowers than the voltage needed to charge them, so each charging cycle eats up around 30% of that energy in the form of heat.

Charging the battery must be moderated. If it’s charged too fast, it might burn. And if it’s overcharged, “it could cause irreversible structural damage or even explode”, says Ju Li, also at the Massachusetts Institute of Technology.

During discharge, oxygen must be pumped into the battery – but along with it comes moisture, which can damage the battery, and other gases such as carbon dioxide which slow the reaction. These waste gases must be removed by a special, expensive membrane.

And converting between solid Li2O2 and gaseous O2 – which expands from solid to gas – can also add strain to the battery’s structure.

In the new design, oxygen and lithium still play lead roles in the reaction, but the oxygen is locked in the battery and transforms between the solid compounds Li2O, Li2O2 and LiO2.

Li2O is mixed into minuscule solid glass particles around five nanometres wide, dubbed nanolithia. The particles are packed away in a matrix of cobalt oxide, which stabilises them and acts as a catalyst for the reactions, which form the cathode.

When the battery is charging, oxygen atoms rearrange themselves: Li2O becomes LiO2 and Li2O2. They revert back to Li2O during discharge.

Zhu and colleagues charged and discharged the battery 130 times and found it only lost 1.8% of its capacity. And when they overcharged it for 15 days, the lithium-oxygen reaction shifted to a harmless reaction within the liquid electrolyte, ethylene carbonate, preserving the system.

Best yet, only 8% of energy during charging is wasted as heat – a huge improvement on 30%.

Tinkering with the electrolyte might improve the battery even further, writes Lawrence Hardwick, a chemist at UK’s University of Liverpool in a News and Views article.

And even though laboratories are intensely searching for the next big energy storage system, “as yet, no obvious front-runner has emerged,” he writes.

“The work from Li and colleagues has added a further promising high energy storage battery system into the mix.”

Indeed, the new system, Li says, is “very scalable, cheap and much safer” than other designs.

So how long until we see these new, improved lithium-air batteries? Li is optimistic that he and his team will build a practical prototype within a year.

Originally published by Cosmos as A more efficient lithium-air battery