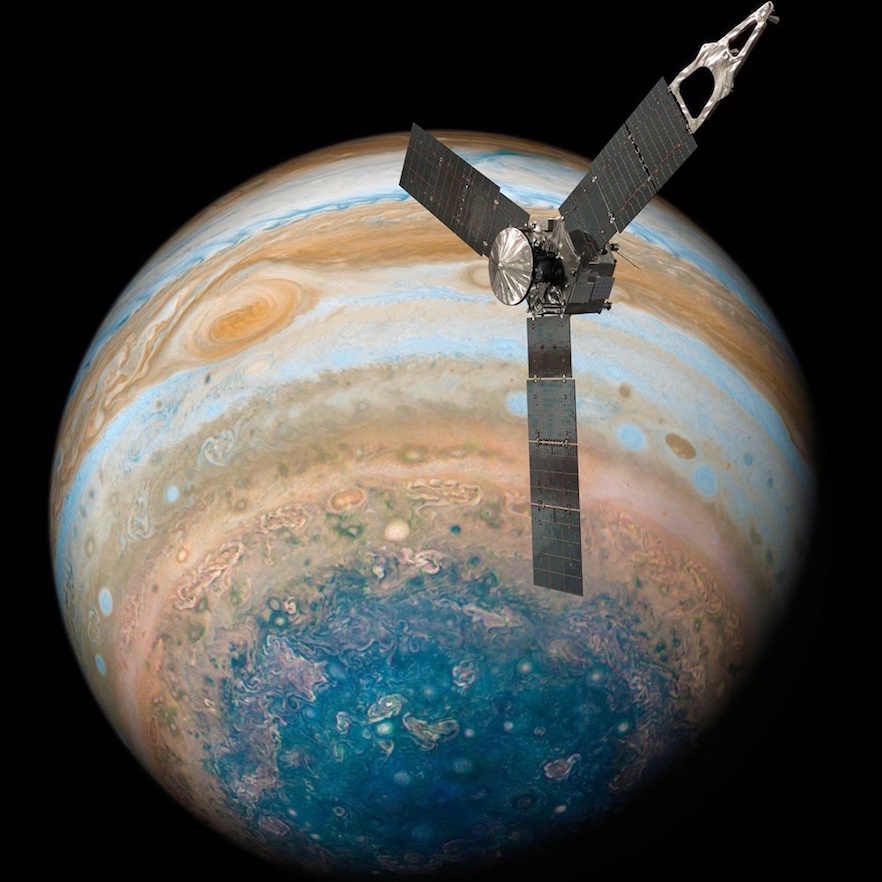 Sometime near the dawn of the Solar System, Jupiter appears to have been clobbered by a Neptune-sized planet, in an impact so intense it penetrated all the way to Jupiter’s core, shattering it.

Previously, planetary scientists had thought Jupiter had a dense, compact core of ice, rock, and metal, about 10 times the mass of the Earth, surrounded by a thick envelope of hydrogen and helium.

It was a simple picture, but gravity measurements from NASA’s Jupiter-orbiting Juno spacecraft show that it isn’t correct.

Instead of being small and compact, Jupiter’s core is “fuzzy” and unexpectedly large, says Ravit Helled, a planetary scientist at the University of Zurich, and a member of the Juno mission.

“This means that the core is mixed with hydrogen and helium and there is a gradual transition between the core and the envelope.”

It’s possible, she says, that this odd structure is a relic of the process by which Jupiter formed. But a simpler explanation is that it’s the result of a giant impact, especially if it was head-on.

In such a collision, she says, an impactor about two-thirds the mass of Neptune or Uranus would have penetrated all the way to Jupiter’s heart, shattering its primordial core in ways that would not have healed, even over the course of billions of years.

“The impact mixes the core of Jupiter and that of the impactor into the inner half of the [hydrogen/helium] envelope to form what we call a ‘dilute core’,” adds Tristan Guillot, a planetary scientist at Côte d’Azur Observatory, Nice, France, who was not part of Helled’s study team.

The next step, Helled says, is to produce a more complete picture of Jupiter by combining Juno’s gravity-field measurements with its measurements of Jupiter’s magnetic field and water abundance.

“What we have learned so far is that Jupiter is a really mysterious planet, and more complex than we thought,” she says. “[The] Juno data keep surprising us.”

She also notes that the new study means that scientists now have evidence of a giant impact on yet another of our Solar System’s eight planets.

“It seems that such impacts were very common in the young Solar System,” she says. “And interestingly, they played an important role in shaping planetary characteristics – not only for Jupiter, but the Earth’s moon, the high metal-to-rock fraction in Mercury, and Uranus’s tilt.”

And while Uranus’s tilt is extreme – it’s flopped over 98 degrees on its side – Saturn has an axial tilt of 27 degrees and Neptune has one of 30 degrees, indicating that they too might have been pounded by ancient collisions, Guillot says.

Add in the fact that many scientists think that Mars’s north pole basin and southern highlands may be the result of a collision with a 1900-kilometre protoplanet, and it might be that Venus is the only one of our Solar System’s planets not to have had such an encounter in its youth.

To find out more, Helled and Guillot both say we need to take advantage of what astronomers are learning about exoplanets, comparing them to what we know about Jupiter and Saturn.

“By combining knowledge from these two perspectives, we can better understand gas giant planets in general,” Helled says.

Guillot adds that the new findings underscore the importance of returning to two planets in our own Solar System that have not been visited since the Voyager flybys in the late 1980s.

“Since this study implies that planets around 10 times the mass of the Earth must have been common in the early Solar System, it becomes crucial to explore the ones that are still in the system today: Uranus and Neptune,” he says.

Helled’s research appears in the journal Nature, in a paper whose lead author was Shang-Fei Liu, of Sun Yat-sen University, China. Guillot’s appeared as an associated commentary.