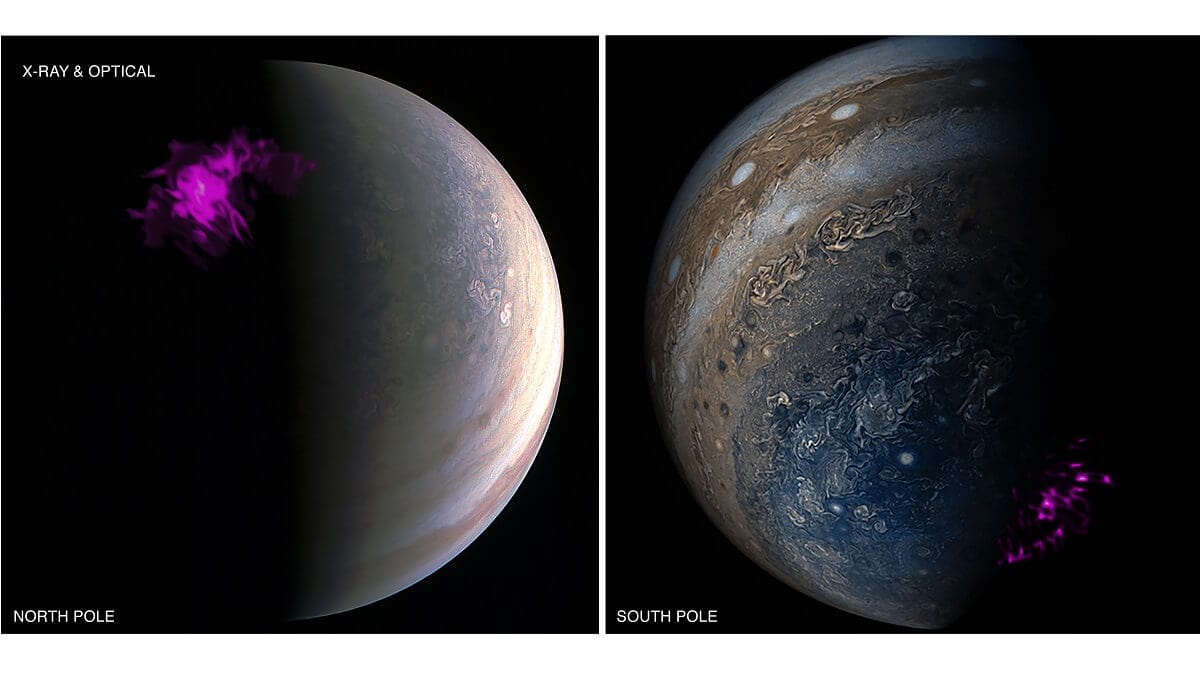 Chinese and UK researchers have solved a 40-year-old puzzle: how does Jupiter produce regular and spectacular bursts of X-rays? Turns out, it’s all to do with the gas giant’s magnetic field.

Like Earth, Jupiter displays spectacular light shows at its poles, where charged particles from the Sun (as well as from giant volcanoes on the moon Io) are channelled by the planet’s magnetic field into the atmosphere. Here, these ions collide with gas atoms and produce bursts of light.

Jupiter’s aurorae are much more powerful than our own, generating X-rays as well as visible light. These are produced like clockwork – but how does the planet accelerate these charged particles to high enough speeds to produce X-rays?

“We have seen Jupiter producing X-ray aurora for four decades, but we didn’t know how this happened,” says William Dunn from the University College London. “We only knew they were produced when ions crashed into the planet’s atmosphere.”

Now, Dunn and colleagues from the Chinese Academy of Sciences have discovered that these X-ray flares are triggered by periodic vibrations in Jupiter’s magnetic field lines, which create waves of plasma that allow ions to “surf” down into the atmosphere, where they collide at high speed and generate X-rays.

For the first time, astronomers have seen the way Jupiter’s magnetic field is compressed, which heats the particles and directs them along the magnetic field lines down into the atmosphere, sparking Jupiter’s X-ray aurora. The connection was made by combining in-situ data from NASA’s Juno mission with X-ray observations from ESA’s XMM-Newton. Credit: ESA/NASA/Yao/Dunn.

“Now we know these ions are transported by plasma waves – an explanation that has not been proposed before, even though a similar process produces Earth’s own aurora,” Dunn says. “It could, therefore, be a universal phenomenon, present across many different environments in space.”

Co-lead author, Zhonghua Yao from the Chinese Academy of Sciences, adds: “Now we have identified this fundamental process, there is a wealth of possibilities for where it could be studied next. Similar processes likely occur around Saturn, Uranus, Neptune and probably exoplanets as well, with different kinds of charged particles ‘surfing’ the waves.”

But there is still another mystery to be solved – what causes the magnetic field lines to vibrate? The researchers suggest the answer might lie in solar wind interactions, or the plasma flows within Jupiter’s magnetosphere.