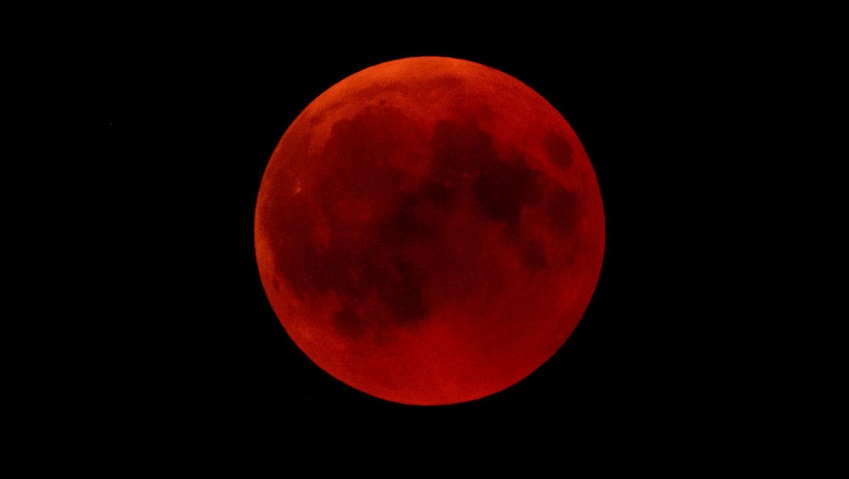 On the night of Wednesday, May 26, a cosmic treat will appear in our skies – a super blood moon. So how do you see it, and why does it occur?

What is a blood moon?

Though it might sound apocalyptic, the moon will not actually be filled with blood. This astronomical phenomenon occurs when the Earth falls directly between the Sun and the moon, blocking direct light and casting a shadow across our lunar neighbour – causing a total lunar eclipse.

As sunlight skims through the Earth’s atmosphere, the higher-energy blue photons are scattered, so only red light reaches the moon. The exact shade of red depends on the amount of dust and clouds in our atmosphere that scatter the light.

The fact that a total lunar eclipse can even happen is a weird cosmic coincidence – the Earth, Sun and moon are currently just the right size and right distance from each other for the Earth’s shadow to completely cover the moon. (In a few billion years, as the moon slips from our gravitational grasp and spirals further away in its orbit, this won’t be the case.)

A total lunar eclipse doesn’t happen every time there’s a full moon because the moon’s orbit is tilted with respect to the axis of the Earth, so it’s not often perfectly aligned. However, we do typically get several partial lunar eclipses (where the moon is cast into partial shadow) a few times a year.

But why is it super?

The moon’s orbit around the Earth is elliptical, not circular, meaning it is alternately closer and further away – there’s a 50,000-kilometre difference between the closest and furthest full moons throughout the year.

On May 26, the moon will be at its closest point to our planet in its cycle – known as perigee – just 357,462 kilometres away. This means it will appear bigger and brighter than a regular full moon.

But in practicality, it won’t seem that much bigger unless you’re a regular moon-gazer. In fact, a lot of the hype around super moons didn’t arise until the last ten years or so, as Google Trends can attest to.

Super or not, a full moon is always glorious to gaze upon, and a blood moon even more so.

How do you see this super blood moon?

Pretty easily! You don’t need anything other than your own eyes to witness this event, though binoculars or a small telescope will reveal lunar details like craters or plains. But you can also just step outside and look up to the east. Full moons always rise around sunset, though you’ll have to wait a little longer to see the red effect.

Unlike a total solar eclipse, which lasts mere minutes, a total lunar eclipse will take about a couple of hours. The moon will start to darken at 7:44pm AEST, then will reach its peak – when the lunar face will be the most vivid red – at 9:18pm AEST, and end at 10:52pm.

So head outside just after 9pm on Wednesday night – that’s 7pm for WA folk, and 8.30pm for NT and SA.

Want to know when to spot the next eclipse? NASA keeps a list predicting lunar eclipses right up until 2100.