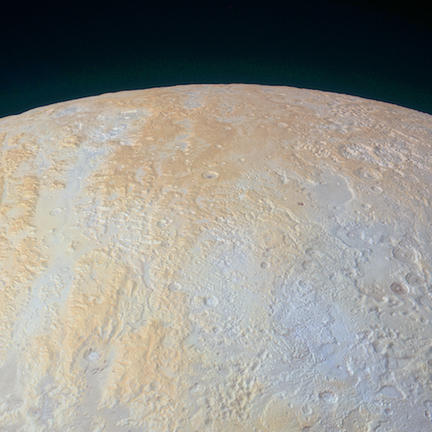 The widest of the canyons (yellow in the image below) – is about 75 kilometres wide. Smaller canyons to the east and west (in green) are approximately 10 kilometres wide.

The degraded walls of these canyons appear to be much older than the more sharply defined canyon systems elsewhere on Pluto, perhaps because the polar canyons are older and made of weaker material.

A shallow, winding valley (in blue) runs the entire length of the canyon floor. To the east, another valley (pink) winds toward the bottom-right corner of the image. The nearby terrain, at bottom right, appears to have been blanketed by material that obscures small-scale topographic features, creating a "softened" appearance for the landscape.

Large, irregularly-shaped pits (in red), reach 70 kilometres across and 4 kilometres deep, scarring the region. These pits may indicate locations where subsurface ice has melted or sublimated from below, causing the ground to collapse.

New Horizons' infrared measurements show loads of methane ice across the region, but little nitrogen ice, such as that found in the dwarf planet's bright heart-shaped region.

“One possibility is that the yellow terrains may correspond to older methane deposits that have been more processed by solar radiation than the bluer terrain,” said Will Grundy, New Horizons composition team lead from Lowell Observatory, Flagstaff, Arizona.