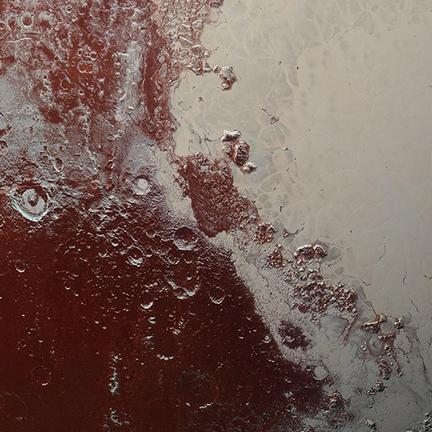 As NASA scientists constinue to analyse the stunning images of Pluto sent back by the New Horizons spacecraft, they are turning their attention to the isolated hills that appear in the vast ice plain that has been named "Sputnik Planum".

They believe they may be fragments of water ice broken away from Pluto’s surrounding uplands, but they are huge fragments, measuring one to several kilometres across.

Because water ice is less dense than nitrogen ice, NASA scientists believe the hills are "floating" in a sea of frozen nitrogen, in a similar way to icebergs in Earth’s Arctic Ocean.

The drifting hills orient in chains along the flow paths of glaciers.

When the hills enter the cellular terrain of central Sputnik Planum, they become subject to the convective motions of the nitrogen ice, and are pushed to the edges of the cells, where the hills cluster in groups reaching up to 12 miles (20 kilometres) across.

In the area named Challenger Colles there is what looks like a large accumulation of these hills, measuring 60 by 35 kilometres. Scientists believe this may be where the water ice hills have been "beached" due to the shallowness of the nitrogen there.

The image below shows the context of the main image.