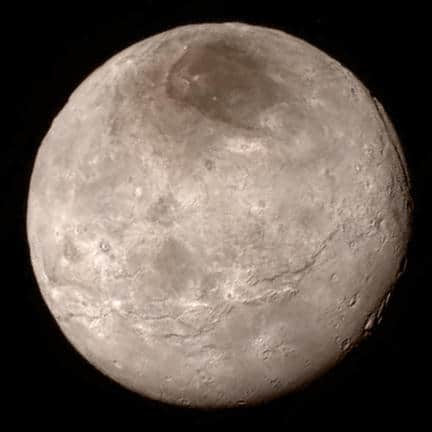 This image focuses on a section of the feature informally named Serenity Chasma, part of a vast equatorial belt of chasms on Charon. In fact, this system of chasms is one of the longest seen anywhere in the Solar System, running at least 1,800 kilometres long and reaching 7.5 kilometres deep. By comparison, the Grand Canyon is 446 kilometres long and just over a 1.6 kilometres deep. The lower portion of the image shows colour-coded topography of the same scene. Measurements of the shape of this feature tell scientists that Charon’s water-ice layer may have been at least partially liquid in its early history, and has since refrozen. Credit: NASA/Johns Hopkins University Applied Physics Laboratory/Southwest Research Institute

If you’ve ever left a can of drink in the freezer, you’ll know the power of expanding ice.

Now, NASA scientists suggest something similar happened to Pluto’s largest moon, in the deep-freeze of the outer Solar System.

New analyses of New Horizon’s photographs of the moon’s equatorial region, snapped in July 2015, show a belt of deep chasms fringed by cliffs towering 11 kilometres high. These fractures, they say, are in line with the freezing and expansion of a subterranean ocean.

So how did Charon get a liquid sea in the first place?

When the moon formed from scraps of dust and rock 4.5 billion years ago, it also collected water. As it coagulated, pressure and radioactivity within may have kept that water from freezing.

But Charon is small. At around 1,200 kilometres in diameter, it’s less than half the size of the Moon. And being way out in the Solar System’s sticks, far from the warmth of the Sun, it cooled quickly.

Scientists think as the rock in Charon chilled, it dropped the temperature of the water. And as that ice froze and expanded, it stretched the moon’s skin, like a forgotten can of soft drink in a freezer.