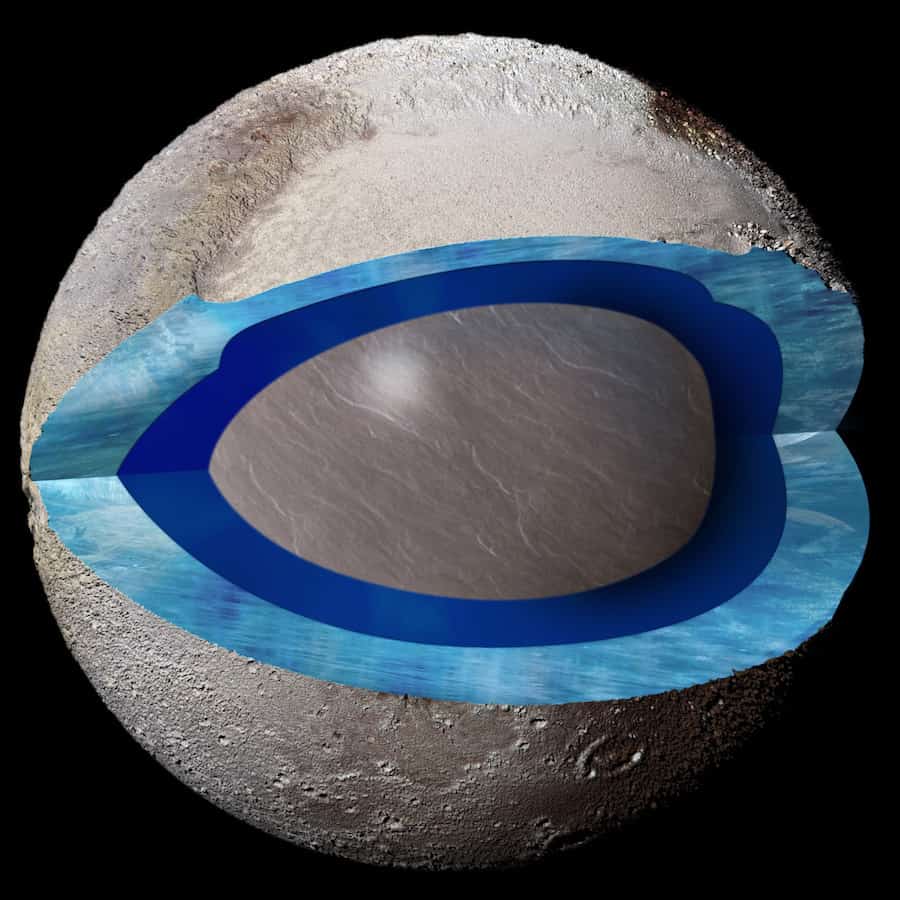 Pluto has a heavy heart – but where that weight came from is still up for debate.

But they have different theories as where that weight came from.

University of California, Santa Cruz planetary scientist Francis Nimmo and his team suggest that the mass is due to a hidden ocean beneath a thin shell of nitrogen ice.

Meanwhile, the University of Arizona’s James Keane and colleagues think years of nitrogen snowing onto the surface compacted over time and filled the area with dense ice.

“First we thought Pluto had to basically be a solid block of ice,” says Matthew Agnew from Swinburne University of Technology in Melbourne, Australia, who was not involved in the study.

“But now we’re finding these really interesting observations that show maybe our understanding isn’t quite as complete as we thought.”

Pluto and its largest moon Charon are gravitationally locked – that is, each keeps the same face towards the other.

The Charon-facing side of Pluto happens to be dominated by Sputnik Planitia – a 1,000-kilometre-wide ice-covered basin on Pluto’s surface. Planetary scientists believe it’s a crater gouged out by an asteroid collision.

The two theories attempt to solve a paradox: when an asteroid hits an object, material is blasted out, resulting in less mass in the area than the average of the surface – known as a “negative mass anomaly”.

But Sputnik Planitia is different. As it always faces Charon, it must be heavier than its surrounds in order to keep the moon locked in place. So where’s the hidden mass?

Nimmo and his colleagues calculate there was only a 5% chance that Pluto’s heart being stationed almost perfectly opposite Charon would be a random event – and a more plausible explanation is lurking beneath.

Using a model of the dwarf planet’s interior with data from the New Horizons mission, Nimmo and his crew suggests there’s enough heat radiating from Pluto to keep a slushy, thick liquid oozing into the basin from beneath the crust – enough to add weight in the area.

Keane’s and his colleagues looked to the Plutonian sky for an explanation. They blamed the weather.

One Pluto year is the same length as 248 Earth years. On the dwarf planet’s shadowed side, it’s so cold that nitrogen and other volatile gases freeze on the surface.

Keane and his colleagues used computer modelling, paired with New Horizons observations, to explain that when Pluto nears the sun on its orbit, the nitrogen evaporates and snows down on the other side of the dwarf planet – and on Sputnik Planitia.

This means ice eventually begins to accumulate until it becomes so heavy and thick, the whole planet gets thrown off balance.

The researchers also note a network of tectonic fractures around Sputnik Planitia might be evidence for water uplifting from beneath the crust and into the crater, much like Nimmo’s theory.

But Keane’s team suggest these fractures are signs that freezing water below expanded and cracked the surface.

Pluto is the largest known body in a distant asteroid belt called the Kuiper Belt, where many bodies are of similar size and composition. In his team’s paper, Nimmo writes subsurface oceans are probably common in the Kuiper Belt.

Agnew agrees but notes it would be difficult to prove.

“It’s hard to conclude whether it’s a common thing in the Kuiper Belt, or whether Pluto is unique in that way, but definitely we’ve found that subsurface oceans don’t seem to be rare,” he says.

Whatever the reason for the excess weight at Sputnik Planitia, Pluto is more than just a snowball.

Originally published by Cosmos as How did Pluto’s heavy heart pack on the weight?