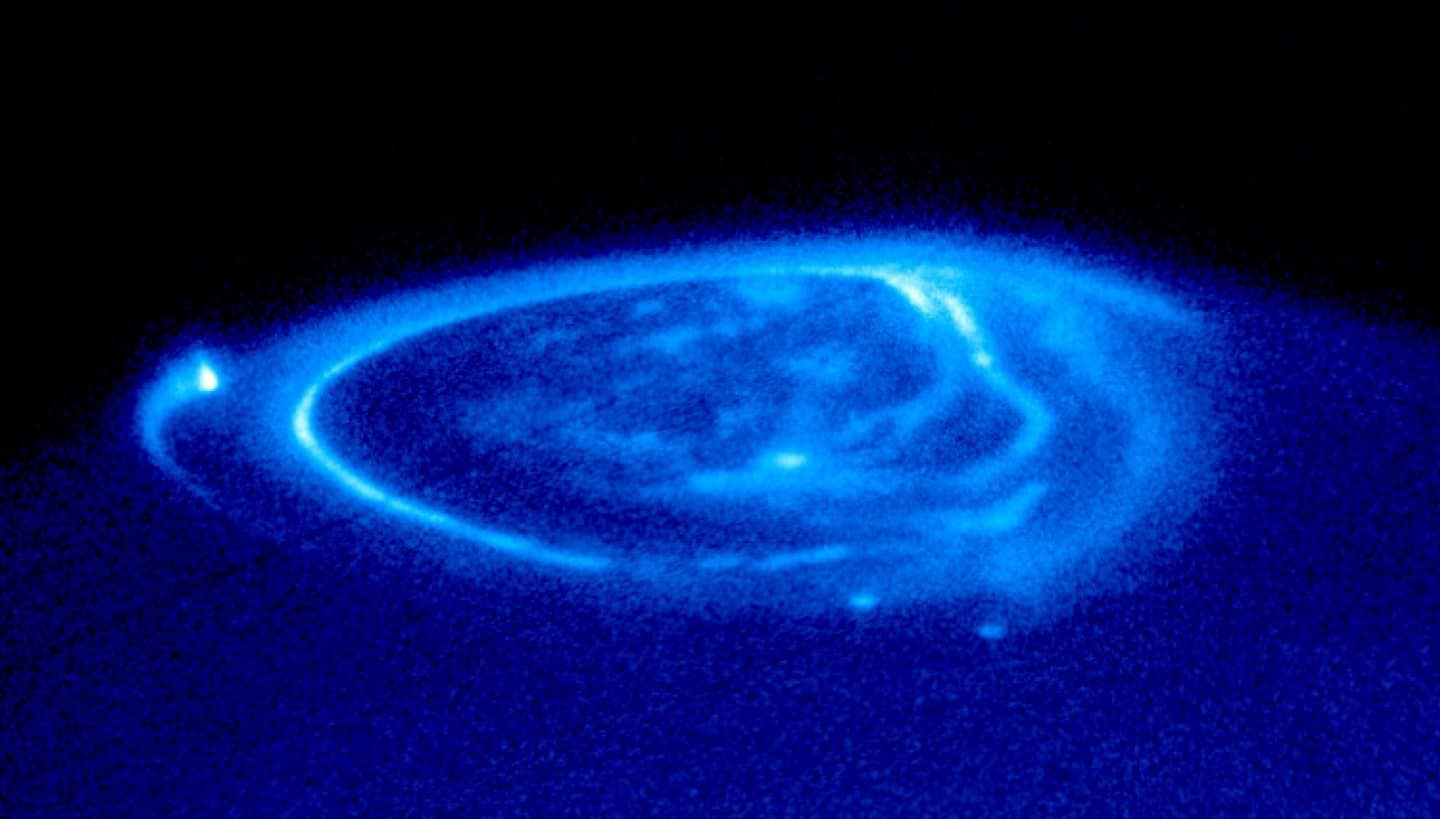 After years of fruitless searching, astronomers have discovered a southern aurora on Jupiter – and it’s weird.

On Earth, auroras – think the northern and southern lights often visible in polar regions – arise when subatomic particles comprising the solar wind slam into the planet’s magnetosphere, the region of space within which charged particles are controlled by the Earth’s own magnetic field.

The impacts cause electrons already in the magnetosphere to arc to an elevated energy state. When this ends and they move once more to a lower state, a photon is released. Cumulatively, they make an aurora.

Jupiter’s northern polar region hosts an aurora that was first recorded by the Voyager 1 spacecraft in 1979.

Voyager’s images used only the visible light spectrum. Later observations by the Hubble Space Telescope and both the XMM-Newton and Chandra X-ray observatories revealed that the aurora – outside of the visible spectrum – was gargantuan.

Significantly, Jupiter’s aurora does not require the solar wind to form: it can be a self-contained process, enabled by the planet’s massive size. As the planet turns on its axis, the drag created as it pulls its magnetic field with it generates an electrical charge – around 10 million volts, in fact.

Electric fields thus generated at the poles grab charged particles from outside the atmosphere – sometimes from the sun, but sometimes also oxygen and sulfur ions from the planet’s volcanic moon, Io – and propels them downwards.

These plummeting ions, as they travel, both lose and gain electrons, and the change in energy state produces the x-ray aurora.

The full process of x-ray aurora production is still not fully understood. For instance, things should be the same at both polar regions, but there has been no sign of a southern phenomenon – until now.{%recommended 5919%}

In a paper published in the journal Nature Astronomy, a team led by William Dunn of University College London, UK, reports that analysis of data gained from XMM-Newton in 2016 and Chandra in 2007 revealed the existence of a southern x-ray aurora.

But there’s a catch. With the auroras on Earth, the phenomena at each pole are broadly equivalent in terms of frequency and density. On Jupiter, it turns out, not so much.

“Jupiter’s northern and southern spots each exhibit different characteristics, such as different periodic pulsations and uncorrelated changes in brightness,” the team writes.

The findings suggest that the two polar regions of Jupiter are sometimes under the influence of significantly different energy fields.

“This is in contrast to current models of x-ray generation for Jupiter,” the researchers note.

They add that coming to understand these differences is critical not only to examining the processes at work on Jupiter, but also to refining the use of x-rays as a diagnostic tool for any other celestial body that exhibits auroras.