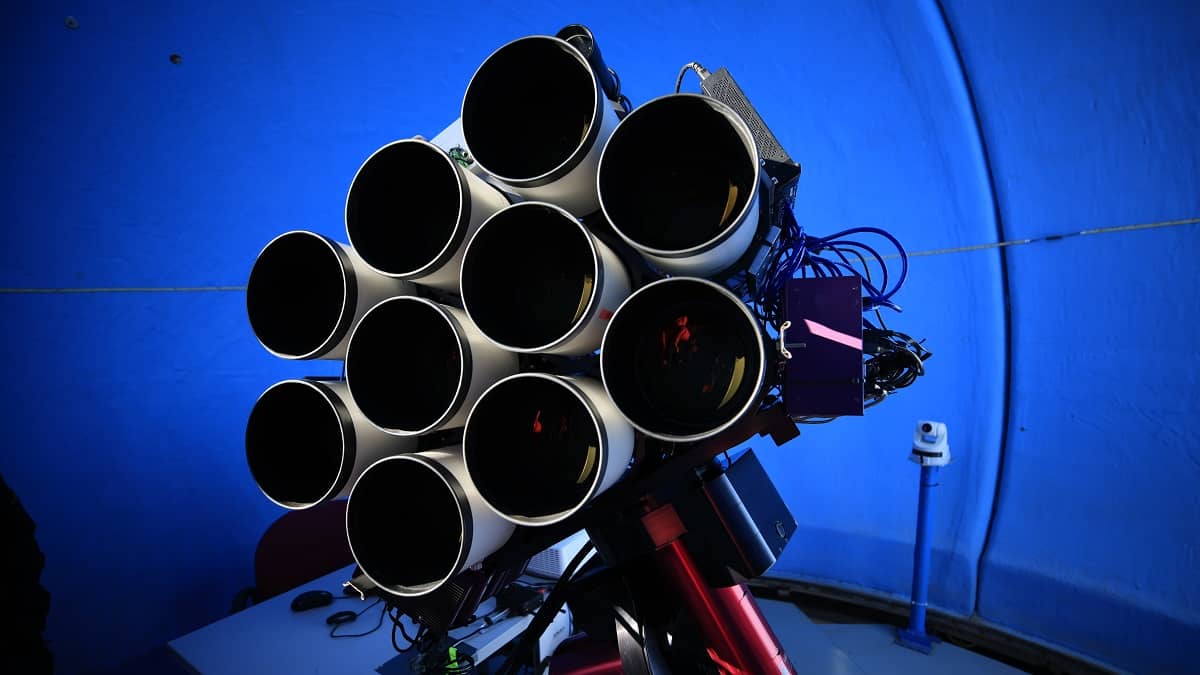 Macquarie University and camera manufacturer Canon are teaming up to deliver a telescope designed to hunt for and study distant galaxies and other astronomical objects. The aim is to learn more about the evolution of galaxies like our own Milky Way.

Given that the task is to hunt for galaxies in the dead of night, it’s no surprise the project is named after an Aussie arachnid icon.

Called the Huntsman Telescope, the instrument is being prepared at the Siding Spring Observatory near Coonabarabran, 180 km west of Tamworth in north west New South Wales. The new telescope is set to commence observations on October 1, this year as part of the StarFest event hosted by Siding Spring every year.

The telescope will be the first of its kind in the Southern Hemisphere, sweeping the southern sky for light in the visible wavelength part of the spectrum from faint and far-off objects to learn about how galaxies form, grow, engage with other structures, and what happens when galaxies collide.

Huntsman’s Principal Investigator is Dr Lee Spitler, an astrophysicist from Australia’s Macquarie University. Spitler says the telescope’s work could be key to understanding the fate of our own home galaxy. The Milky Way is on a collision course with its nearest neighbour, the Andromeda Galaxy, a galactic pileup set to occur in about 4.5 billion years.

“The Huntsman Telescope is pioneering the way in which we view our Southern skies by capturing images of the faintest galaxy structures that conventional telescopes simply couldn’t,” says Spitler. “The ability to detect the faintest and smallest galaxies in the universe will help us understand the potential fate of the Milky Way in the far distant future.”

Huntsman will make use of an array of ten commercially available Canon EF 400mm f/2.8 L IS II super-telephoto lenses usually used by professional sports or wildlife photographers. The array is inspired by the Dragonfly Telephoto Array, run by the University of Toronto in Canada, which is in turn inspired by the tessellated eyes of its namesake, the humble dragonfly. The Dragonfly Telephoto Array also uses Canon telephoto lenses.

The L-series of Canon lenses use a coating to deal with reflections with structures on the nanometre scale (smaller than the wavelength of the light being observed). These structures diffuse the light just enough to reduce reflections. This contrasts with conventional mirror telescopes which are polished – the polishing process is not perfect and can introduce subtle errors into observations.

Huntsman’s lenses are also widefield, giving the telescope redundancy in its sight to improve accuracy.

“Canon is proud that our EF-lenses will play a role in helping Australian scientists tackle some of the most critical questions in astronomy today,” says Kotaro Fukushima, Managing Director of Canon Oceania.

“The Huntsman’s new suite of powerful computers enable each lens or ‘eye’ of the Huntsman to operate independently of each other. This will allow the telescope to autonomously detect ultra-fast transient events like stellar flares from distant stars, or even more exotic phenomenon like aiding the search for the origin of fast radio bursts that continue to elude astronomers,” says Caddy.

StarFest is on at Coonabarabran on September 30 and October 1.

Originally published by Cosmos as New Australian telescope, the first of its kind in the Southern Hemisphere, will study the evolution of galaxies