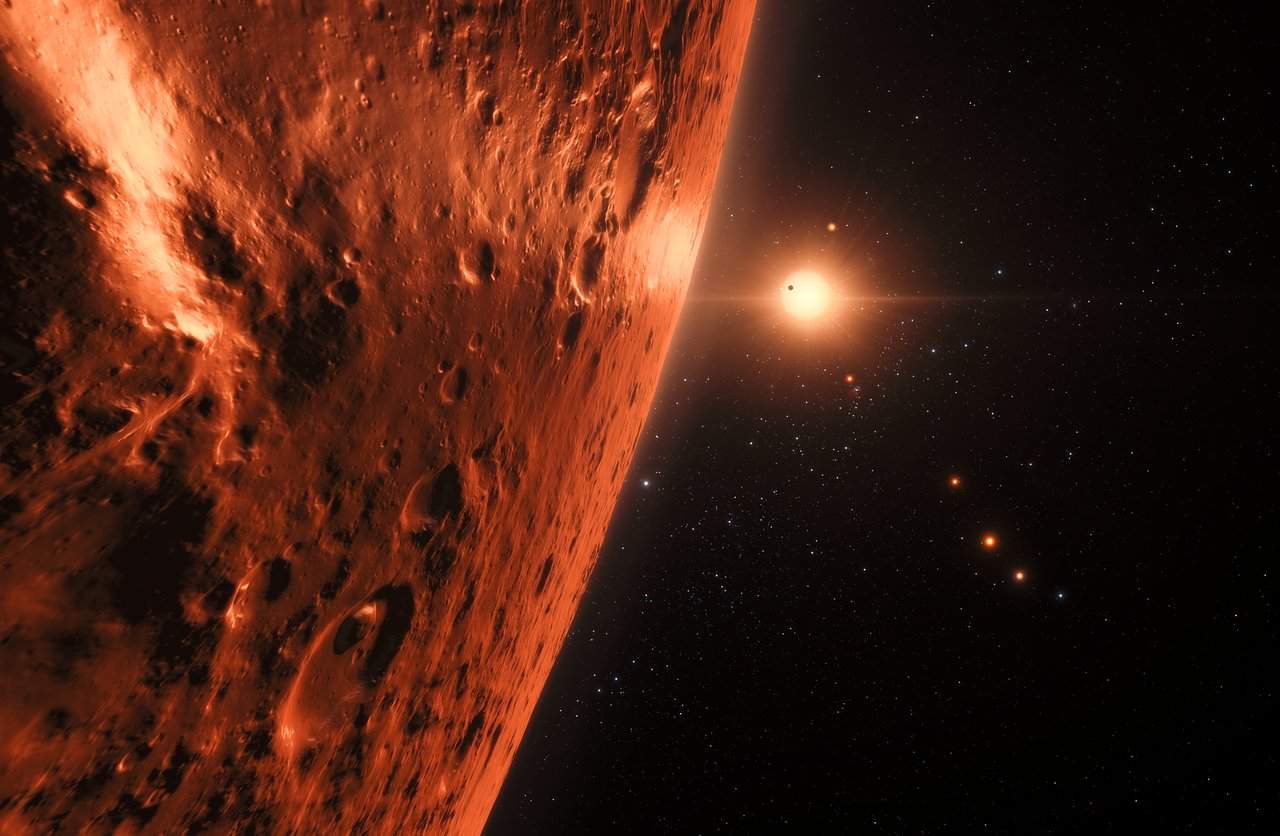 An artist's impression of the TRAPPIST-1 system.

Astronomers studying the TRAPPIST-1 system of seven rocky Earth-sized planets orbiting a dwarf star have concluded that there may be substantial amounts of water on the outer planets. This includes the three planets in the star’s habitable zone.

TRAPPIST-1 (so named because it was the first system of interest found by the Transiting Planets and Planetesimals Small Telescope – TRAPPIST – project that searches the skies for exoplanets) first came to the attention of scientists in May 2016. At that stage astronomers believed that the star, 40 lightyears from Earth, had only three planets.

In February 2017, further study showed that there were seven planets, all rocky and of approximately Earth size, and hopes of extraterrestrial life grew.

These hopes were dampened somewhat in March 2017, however, when more sophisticated analysis suggested that all the planets were most likely too hot or too cold to be habitable.

The new research, published in The Astronomical Journal, may revive hopes somewhat. An international team of scientists led by Vincent Bourier from the University of Geneva in Switzerland, used the Hubble Space Telescope to study how much ultraviolet (UV) radiation each of the seven planets would receive from their host star, which is much smaller and cooler than the Sun.

The researchers concluded that the innermost planets, TRAPPIST-1b and TRAPPIST-1c, receive so much UV radiation that they would have lost vast amounts of water – as much as 20 times as much as is contained in the oceans of Earth – over the last 8 billion years. This makes it very unlikely they would still hold enough water to support life.

However, the outer planets TRAPPIST-1e, TRAPPIST-1f and TRAPPIST-1g – which are believed to be in the ‘habitable zone’ where temperatures make liquid water possible – receive much less UV radiation, and are likely to have retained some water on their surfaces.

However, a definitive answer on the TRAPPIST-1 water question will await the arrival of better telescopes. “Our results suggest that the outer planets are the best candidates to search for water with the upcoming James Webb Space Telescope,” says Bourrier. The James Webb Space Telescope is expected to begin operations in mid 2019. Until then, speculation will continue.