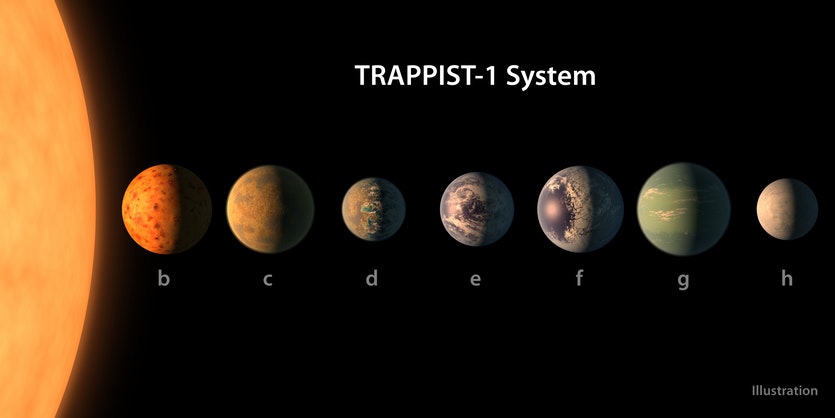 The announcement of the Trappist-1 system in February, with seven rocky planets orbiting an ultracool dwarf star, sent ripples of excitement through astrobiologists everywhere.

At least three of the planets looked like they were within the star’s “habitable zone” – the region in which water will remain liquid. On that level, at least, the trio seemed like very good candidates for hosting life.

Now, however, 3D climate modelling is dampening expectations, suggesting that at most only one of Trappist-1’s satellites could support life.

The modelling has been completed by Eric Wolf from the Laboratory for Atmospheric and Space Physics at the University of Colorado, Boulder. In doing so, he made the assumption that the seven planets are – or had once been – ocean-covered, with atmospheres comprising nitrogen, carbon-dioxide and water vapour. Orbital and geophysical properties were derived or deduced from collected data.

When Wolf ran the numbers, the results were rather depressing.

“Model results indicate that the inner three planets presently reside interior to the inner edge of the traditional liquid water habitable zone,” he writes in a paper lodged on pre-print site arxiv.

“Thus if water ever existed on the inner planets, they would have undergone a runaway greenhouse and lost their water to space, leaving them dry today.”

The outer three planets, he adds, “fall beyond the maximum CO2 greenhouse outer edge of the habitable zone” and will have entered a lifeless snowball state.

Thus, only the middle planet remains a candidate for hosting life. It could maintain “at least some habitable surface”, Wolf notes, depending on the atmospheric nitrogen levels. If the planet is, in fact, covered in ocean, then “near present day Earth surface temperatures can be maintained”.

However, even one habitable planet may turn out to be a forlorn hope. Ultracool dwarf stars, Wolf says, may take as long as one billion years to settle into a stable system, during which orbiting planets are exposed to intense solar radiation, producing extreme greenhouse conditions. If this was the case with Trappist-1, then for the middle planet to retain abundant water today it would have to originally held seven times the ocean volume of Earth.

Wolf, however, is not the only scientist investigating the possibility of life in the Trappist-1 system. Also lodged on arxiv during March was a paper by Harvard astrophysicists Manasvi Lingam and Abraham Loeb, in which they explore the idea that life may have arisen on a single planet orbiting the star, then spread to “multiple” others by a process known as panspermia.

In the 1970s panspermia was championed as a potential explanation for life on Earth by prominent astronomers Fred Hoyle and Chandra Wickramasinghe. The pair suggested that life began on our planet when microbes blew in from outer space.

“By drawing upon the analogy with the theory of island biogeography, we argued that a large number of species could have ‘immigrated’ from one planet to another, thereby increasing the latter’s biodiversity,” they write.

“As known from studies on Earth, a higher biodiversity is correlated with greater stability, which bodes well for the multiple members of the Trappist-1 system.”