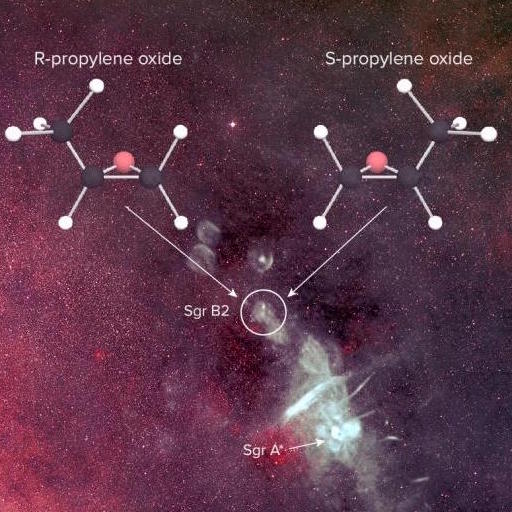 Mirror-image molecules form the basis of life on Earth – and now, one such molecule has been found in space for the first time.

The telltale signature of propylene oxide, which can exist in “left” and “right” configurations, was detected by sensitive telescopes on Earth all the way from the centre of our galaxy, the Milky Way.

It’s “a pioneering leap forward in our understanding of how prebiotic molecules are made in the universe and the effects they may have on the origins of life”, according to Brett McGuire, a chemist with the National Radio Astronomy Observatory in Charlottesville, Virginia, and co-lead author of the work which was published in Science.

So why is a molecule that’s not even used by living organisms on Earth such a big deal?

The important element of propylene oxide is what’s known as chirality. Your left hand is pretty much a mirror image of your right. But while both hands have fingers and a thumb, their “reflected” nature means you can’t comfortably put a right glove on your left hand.

Molecules are similar, especially complex molecules for life such as proteins and sugars. So life tends to choose one form or another to function – not both.

Your DNA – all DNA on Earth, in fact – is made of “left-handed” amino acids, with not a rightie in sight. The reason? No one knows.

It’s thought amino acids and other molecules are made in interstellar space (that is, the near-vacuum between stars) when particles collide and join to build complex molecules. A passing comet or meteorite might then ferry them to a planet and help “seed” life. If a meteorite lands and it has slightly more right-handed molecules than left, life will build itself around that right-handedness, for instance.

Meteorites carry amino acids, and last year, laboratory experiments showed chiral molecules could be cooked up in the dusty, cold conditions of space. But no one had picked up any signs of chiral molecules outside our solar system – until now. It wasn’t easy, though.

When molecules vibrate in space, they emit a tiny amount of energy which can be picked up using super-sensitive radio telescopes on Earth.

Simple molecules tend to emit neat “spikes” of emission while bigger, more complex molecules are a little harder to detect, as their signature is, fittingly, more complex.

Which is why when the team, led by McGuire and Caltech’s Brandan Carroll, picked up the complex signature of the chiral molecule propylene oxide (CH3CHCH2O) with the Green Bank Telescope in the US, they had to double check.

The Parkes Radio Telescope in Australia confirmed it – they’d found propylene oxide in the giant cloud of gas and dust called Sagittarius B2. Also known as Sg B2, the cloud is around three million times the mass of the sun, and previous telescope observations found signs of molecules such as alcohol and ethyl formate, a precursor to amino acids.

But alcohol and ethyl formate are non-chiral. Was the propylene oxide left or right-handed?

Nutting that out, unfortunately, is beyond the telescopes’ capabilities. It’s a bit like picking up a shadow cast by a hand on a wall, but “it’s impossible to tell if a right hand or a left hand is casting the shadow”, Carroll says.

And although propylene oxide isn’t used by organisms on Earth, its presence in space gives astronomers hope they’ll find other – perhaps life-based – chiral molecules floating around in space.