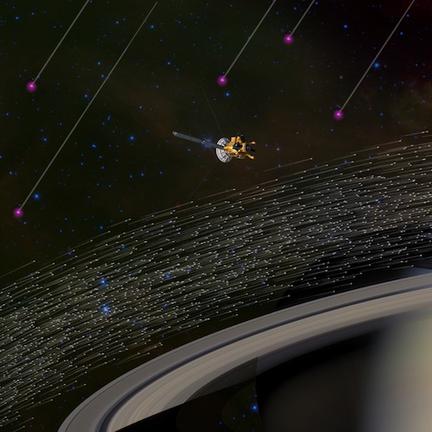 The Cassini spacecraft has captured interstellar dust originating beyond our solar system. There is not much material – just 36 tiny grains among millions streaming through space – but the discovery is exciting NASA researchers, as the particles are of a uniform composition that we have never seen before.

“We always hoped we would be able to detect these interstellar interlopers at Saturn with Cassini,” said Nicolas Altobelli, Cassini project scientist at the European Space Agency and lead author of the study that detailed the find.

The study, which was published in the journal Science, was conducted using the cosmic dust analyser instrument on Cassini, that was launched in 1997, entered orbit around Saturn in 2004 and has been sending back groundbreaking images and data ever since.

This is not the first time particles of this type have been detected. The Ulysses mission back in the 1990s detected interstellar dust that was later confirmed by the Galileo spacecraft.

That material was traced back to the local interstellar cloud that our solar system is travelling through. But neither Ulysses nor Galileo had the facility to determine the make-up of the dust.

Cassini’s instruments show the particles it captured are made of minerals rather than mostly ice, as would typically be seen from dust within our solar system.

The grains all had a similar chemical make-up of elements such as magnesium, silicon, iron and calcium in average cosmic proportions. However, they contained less sulfur and carbon than is found elsewhere.

But it was the uniformity of the composition of each grain that surprised scientists.

"Cosmic dust is produced when stars die, but with the vast range of types of stars in the Universe, we naturally expected to encounter a huge range of dust types over the long period of our study," said co-author Frank Postberg of the University of Heidelberg.

The scientists speculate that the dust captured by Cassini had been made uniform through some repetitive processing in the interstellar medium, perhaps through shockwaves from dying stars.

Dust from our own solar system moves around the Sun, whereas interstellar dust moves in a specific direction as the Solar System hurtles through it, travelling at speeds of more than 72,000 kilometres per hour – so fast the grains do not become caught in the Sun's gravity.

Cassini has detected millions of dust particles since it entered orbit around Saturn. However, most of these originate from Enceladus, a geologically active moon, and erupt from massive jets shooting from its surface.

"We're thrilled Cassini could make this detection, given that our instrument was designed primarily to measure dust from within the Saturn system, as well as all the other demands on the spacecraft," said Marcia Burton, a co-author NASA's Jet Propulsion Laboratory.