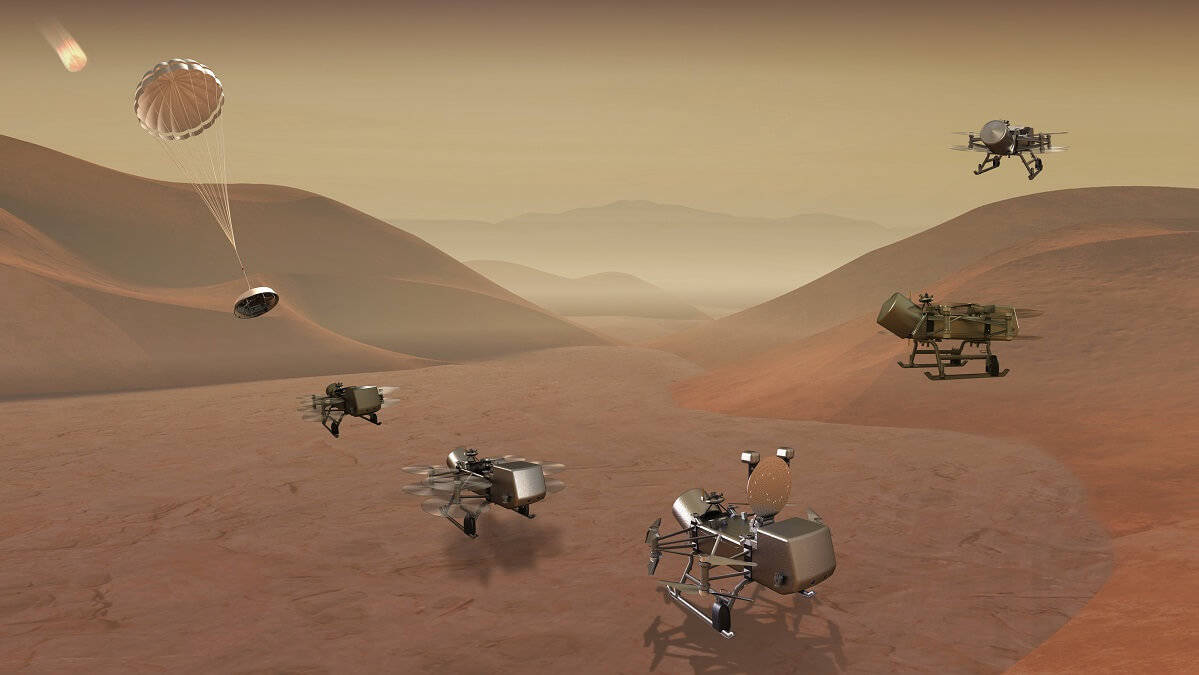 Saturn’s largest moon Titan is an extraordinary world. We know it has sand dunes, lakes, seas, streambed, a substantial atmosphere, weather systems like Earth and methane rain – but we barely know any details about it.

In the mid-2030s NASA plans to explore this promising moon in depth, sending a flying, drone-like rover called Dragonfly that will be capable of jetting across the surface using rotorblades.

But what will it study? Last week, the Dragonfly team announced their ambitious science goals in The Planetary Science Journal.

“Titan represents an explorer’s utopia,” says co-author Alex Hayes from the University of Idaho. “The science questions we have…are very broad because we don’t know much about what is actually going on at the surface yet.

“My primary science interests are in understanding Titan as a complex Earth-like world and trying to understand the processes that are driving its evolution.”

Some of the most exciting aims are to search for chemical biosignatures, to study the moon’s methane cycle, and to explore the prebiotic chemistry to see if life could exist there.

“For every question we answered during the Cassini mission’s exploration of Titan from Saturn orbit, we gained 10 new ones,” Hayes says.

Scientists from the Queensland Museum have discovered five new species of golden trapdoor spiders in south-east Queensland, from inner-city Brisbane to the Gold Coast hinterlands.

“We have been working on this project for a few years, as a number of these species look very similar and live near each other, which meant we had to compare a large amount of evidence to describe these five new species,” says Michael Rix, co-author of the paper published in Invertebrate Systematics.

“When we describe a new species we need to consider their morphology, or what they look like, but also compare their DNA to see how similar genetically they are, and then of course where they are found.”

Lead author Jeremy Wilson says that although the spiders are generally not actually golden, they are a “remarkable group of spiders and are very interesting in that they are so varied, from being very spiny to being quite large – some of them have bodies that are around four centimetres in length”.

Rix concludes: “This work is especially important and timely as we try to protect those species still living in remnant habitats in urban environments around Brisbane.”

Chain mail for the modern day

Scientists led by the California Institute of Technology in the US have created a ‘smart fabric’ inspired by medieval times. Like chain mail, it can turn from pliable to rigid and then back again.

It is made up of interlinked 3D polymer elements, and under normal conditions it can be flexibly draped over objects. But when under pressure or compressed, the interlinked particles jam together and become 25 times stiffer, able to hold loads over 30 times the material’s own weight.

“Our work provides routes towards lightweight, tunable and adaptive fabrics, with potential applications in wearable exoskeletons, haptic architectures and reconfigurable medical supports,” the authors write in their paper, published in the journal Nature.

Sharks coasted through the dinosaurs’ demise

While dinosaurs rose and fell in a dramatic extinction, sharks were just hanging out wondering what all the fuss was about, according to a team led by Mohamad Bazzi of Uppsala University, Sweden.

The researchers looked at 1,239 fossilised shark teeth spanning 27 million years to get an idea of shark diversity through the ages.

This period of time overlapped with the mass extinction event 66 million years ago that wiped out a vast number of species, including all non-avian dinosaurs. But shark diversity didn’t suffer overall – they just kept on swimming, according to the study published in PLOS Biology.

Some apex predators (characterised by with triangular, blade-like teeth) were impacted during this time, but other groups (like the Odontaspididae family, with narrow, cusped teeth adapted for feeding on fish) increased in diversity, which may have been a result of the diversification of prey species.

Teaching and retaining Indigenous languages are intrinsically linked to people’s connection to their country, culture and community, say Australian researchers.

A recent paper in The Journal of the Acoustical Society of America has investigated the phonetics of three Central Australian languages – Arrernte, Pitjantjatjara and Warlpiri.

“Our study of consonant articulation among 21 speakers of these three neighbouring Central Australian languages highlights the unique use of language and subtle differences between the users,” says lead author Marija Tabain, from La Trobe University.

Co-author Andrew Butcher from Flinders University adds: “This ongoing research is increasingly confirming the uniqueness of Aboriginal languages, particularly as regards their sound systems and range of articulations.”

The work also highlights that preserving language means more than just words – it’s key to holding onto a vast diversity of traditions and knowledge systems.