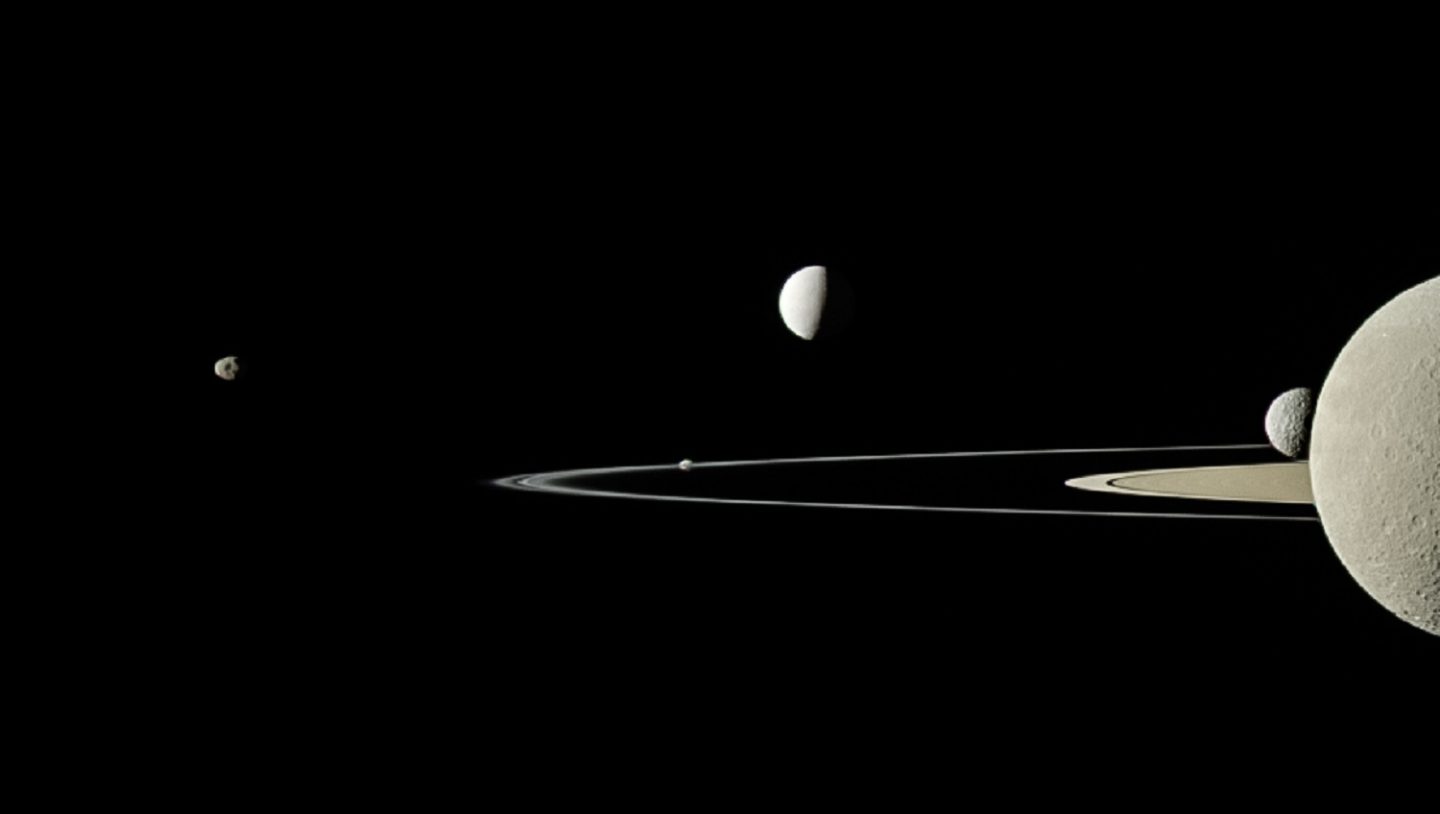 Twenty-one months ago, NASA’s Cassini spacecraft ended its mission with a fiery dive into Saturn’s atmosphere.

For the previous 13 years, until it ran out of manoeuvering fuel, the hardy spacecraft had returned an enormous trove of data about the planet, its moons, and the rings – a treasure chest that continues to yield new results, even today.

There were an enormous number of findings, says Cassini’s project scientist, Linda Spilker of NASA’s Jet Propulsion Laboratory (JPL) in California, US, but two were “really phenomenal”.

One was the discovery that Saturn’s tiny moon Enceladus, only 500 kilometres across, harbours a subsurface ocean that might be a suitable abode for life.

Before Cassini, scientists knew that Enceladus was bright and icy. They also knew it lay in the middle of Saturn’s faint E-ring, which probably meant that it and the ring were somehow related.

“But we didn’t know how,” Spilker says.

Then Cassini spotted geyser-like jets shooting out of cracks near Enceladus’s south pole. These not only were the source of the ice particles that formed the E-ring, they immediately sparked curiosity about what might be creating them.

In a process that Spilker compares to the clue-by-clue unfolding of a detective story, the team manoeuvered the craft to buzz by Enceladus again and again and again. Seven times, she says, they even flew directly through the jets, “tasting” the materials contained in them.

In doing this they not only had to steer, but also repurpose instruments for tasks nobody had dreamed of when the mission was launched.

Happily, Spilker adds, the mission had been planned to be ready for surprises.

“We had a very capable set of instruments,” she explains, “an excellent toolkit” to address unexpected questions.

The instruments found that the water that supplied the jets was salty, and that it came from a source that contained hydrocarbons, methane, and carbon dioxide – key ingredients for life.

“It’s just so intriguing to wonder, could life exist in this ocean under the icy crust of Enceladus?” Spilker says.

Bonnie Buratti, another planetary scientist at JPL who worked on the Cassini team, notes that this discovery produced a major change in how astrobiologists viewed the search for extraterrestrial life or habitable environments in our own Solar System.

“We’ve moved from looking for life on Mars to ocean worlds,” she says.

Previously, scientists knew that Titan had a thick atmosphere that shrouded its surface. But with radar and infrared sensors, Cassini was able to peer beneath. It also launched a lander built by the European Space Agency, which parachuted all the way to the surface, taking pictures all the way down.

Gradually, a picture emerged of a world that had many things in common with Earth, including rain, river channels, lakes, seas, and sand dunes – but at temperatures so cold that water is frozen rock-hard, and the liquid in the lakes and seas is methane.

“[It’s] this hauntingly familiar, earthlike world,” Spilker says, “yet everything is driven by methane.”

Buratti adds that It’s also possibly an ocean world, referring to studies that have found that beneath its cold exterior, Titan, like Enceladus, may have a subsurface ocean that might even be hospitable for earthlike life. {%recommended 7811%}

Cassini also looked at Saturn itself, and many of the giant planet’s other moons. But some of the most recent discoveries involve its rings.

One of these discoveries is that they appear to be far younger than the planet itself, says Shigeru Ida, of Tokyo Institute of Technology, Japan.

In fact, researchers have recently suggested that the rings might have formed as recently as 10 to 100 million years ago. Saturn itself, like Earth, dates from the dawn of the solar system, about 4.5 billion years ago.

Also unexpected was the discovery of just how complex the rings turned out to be.

“To the limits of the resolution we had,” Spilker says, “we were still seeing more and more detailed, interesting structure.”

Most recently, a team led by Matthew Tiscareno, of the SETI Institute’s Carl Sagan Institute for the Study of Life in the Universe, in California, examined some of the mission’s best close-ups of the rings, taken primarily during “ring-grazing” orbits that occurred from December 2016 to April 2017, shortly before the mission’s end.

Not long ago, it was believed that the brightness of any given band within the rings reflected the density of the particles within it — or, as Tiscareno puts it, the brighter ringlets are “where there’s more stuff”.

Perhaps, he says, the dim bands are made of more scattered, relatively large particles, while the bright ones are richer in light-reflecting dust.

Support for this comes from the fact that the new images allow scientists to zoom in even more closely to individual segments of the rings.

When they do, Tiscareno says, the images reveal “texture belts” in which some bands of the rings look “clumpy”, while others are streaky, and still others look smoothly uniform.

We’ve never got close enough to see an individual ring particle, Tiscareno says, “but the belts of texture are driving home that we really don’t understand how the rings work on the particle level”.

He adds: “You get differences with sharp boundaries, and we don’t know why that is happening.”

Meanwhile, planetary scientists are itching to get back to the outermost planets.

Return trips to Saturn, Spilker says, could involve an Enceladus orbiter, and even a lander “to really answer the question, is there life in its ocean.”

Also of interest is a return to Titan, where again there are questions about the prospects for life.

Or, a future mission might go even closer to the rings than Cassini did – close enough to see individual particles and watch how they interact. That would be of interest not merely for the study of Saturn, but because its rings have similarities to the protoplanetary disks that surround young stars.

“That might tell us about not only how our own planets formed, but planets in other solar systems as well,” Spilker says.

But, she and Buratti caution, we shouldn’t ignore the rest of the outer solar system.

Neptune’s giant moon Triton is similar to Titan – and not merely due to the confusing similarity in names. We’ve only got close to it once, during the Voyager 2 flyby in 1989, but that quick encounter showed that it appears to have active geysers on its surface.

“That makes you wonder if Triton is another in this class of ocean worlds,” Spilker says.

Nor should we forget Uranus. “It has a lot of interesting moons and weather,” Buratti says. “So really, the sky’s the limit, depending on how much funding we get.”

Tiscareno, Spilker, Buratti, and Ida, all have papers published in the current issue of the journal Science.