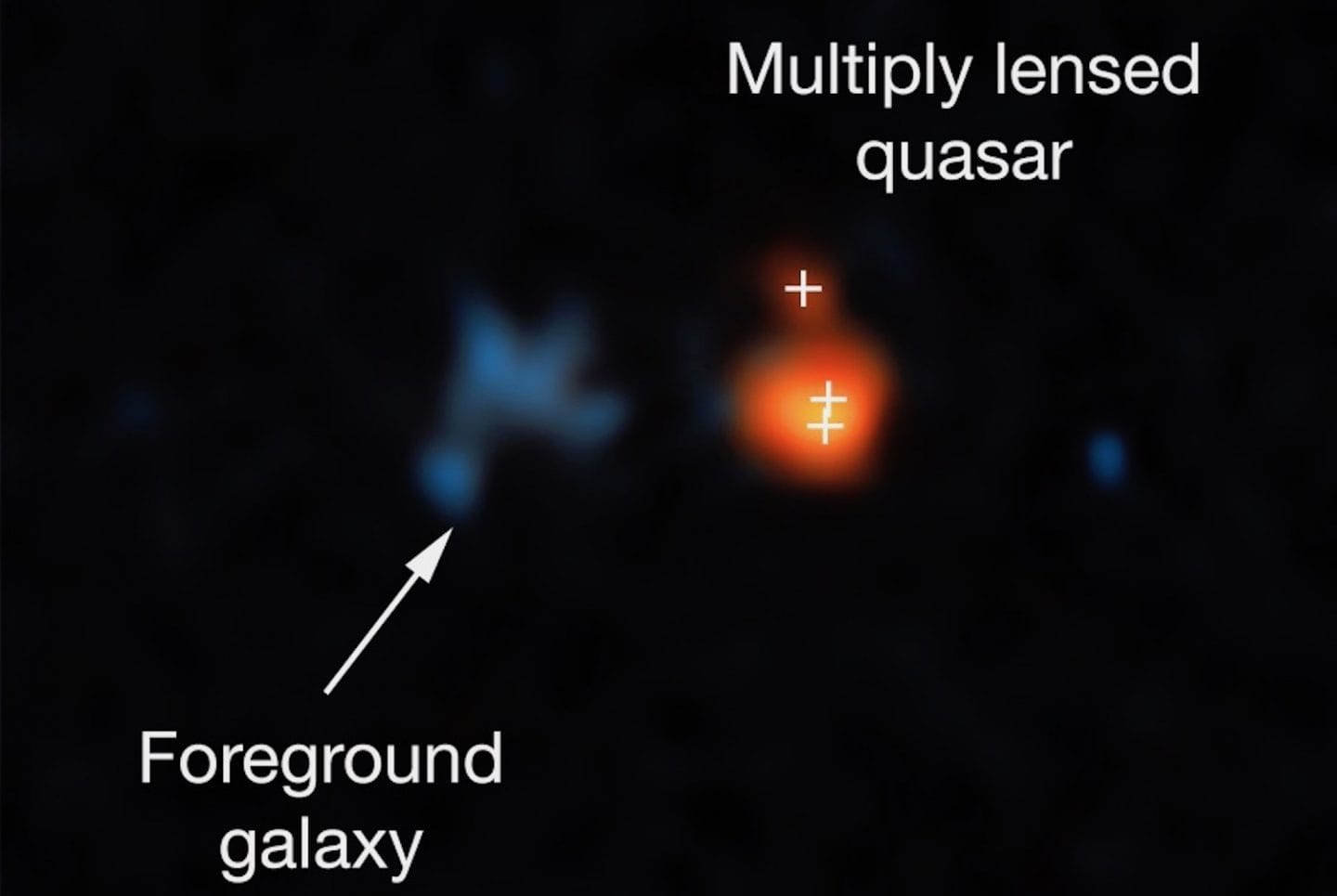 After a decades-long search, the Hubble Space Telescope has spied a quasar as bright as 600 trillion suns – the brightest ever seen in the early universe.

Quasars are compact but energetic objects, thought to be monstrously hungry black holes at the centres of young galaxies. Their powerful glow is produced when material spirals into the gravitational whirlpool and becomes heated to millions of degrees, blasting out enormous amounts of energy across all wavelengths.

The objects were most numerous over 10 billion years ago, making them a useful probe for examining the early days of the cosmos.

This newly-discovered quasar was blazing when the universe was less than a billion years old, when the first generation of galaxies was still forming.

Now, 12.8 billion years later, Hubble has captured the object’s brilliant light. Catalogued with the attractive name of J043947.08+163415.7, the ancient quasar was discovered by a team of astronomers led by Xiaohui Fan from the University of Arizona in the US. Their discovery is published in the Astrophysical Journal Letters.

At 600 trillion times brighter than the sun, the quasar smashes the previous record of the brightest one ever detected, which was only as bright as 420 trillion suns.

“We don’t expect to find many quasars brighter than that in the whole observable universe,” says Fan.

Fabio Pacucci, co-author and a postdoctoral associate at Yale University, US, adds, “This detection is a surprising and major discovery. For decades we thought that these lensed quasars in the early universe should be very common, but this is the first of its kind that we have found.”

The discovery was made possible by a lucky celestial alignment that created a natural zoom lens. Between the quasar and Earth is a dim galaxy with enough gravitational heft to amplify and distort the light of the more distant quasar, making it appear three times larger and 50 times brighter.

This phenomenon is called gravitational lensing, where the foreground object acts as a lens to change our image of the background object.

“Without this high level of magnification, it would make it impossible for us to see the galaxy,” says co-author Feige Wang from the University of California, Santa Barbara, in the US.{%recommended 745%}

The object was first noticed in ground-based surveys, and follow-up observations were made with the University of Arizona’s Multi-Mirror Telescope, the Gemini Observatory and the Keck Observatory. The data revealed a faint foreground galaxy, but it and the quasar are so close together in the sky that the system appeared fuzzy. It took Hubble’s keen eye to resolve them into exquisitely sharp images.

The James Clerk Maxwell Telescope on Mauna Kea, Hawaii, also highlighted swathes of hot dust in the quasar’s host galaxy. This indicates this super-bright quasar has triggered a firestorm of star formation around it, igniting up to 10,000 stars per year.

In comparison, the Milky Way churns out just one.

Team member Jinyi Yang, also at the University of Arizona, does note that “because of the boosting effect of gravitational lensing, the actual rate of star formation could be much lower than the observed brightness suggests”.

It could also hold clues to the evolution of the universe itself. The quasar exists during the period of reionisation, a transitional era when the energetic light of the first stars reheated the obscuring hydrogen that had cooled off 400,000 years after the Big Bang. Studying quasars like this one could give insight into this still-mysterious era.

Fan’s team is currently analysing a detailed 20-hour spectrum of the quasar taken by the European Southern Observatory’s Very Large Telescope in Chile. This will allow them to identify the chemical composition and temperatures of intergalactic gas in the early universe.

The team also hopes to study the object with the Atacama Large Millimetre/submillimetre Array and the upcoming James Webb Space Telescope. These super-sensitive observatories will peer into the region around the supermassive black hole and observe how its immense gravity influences the surrounding star formation – and, indeed, the assembly of early galaxies.