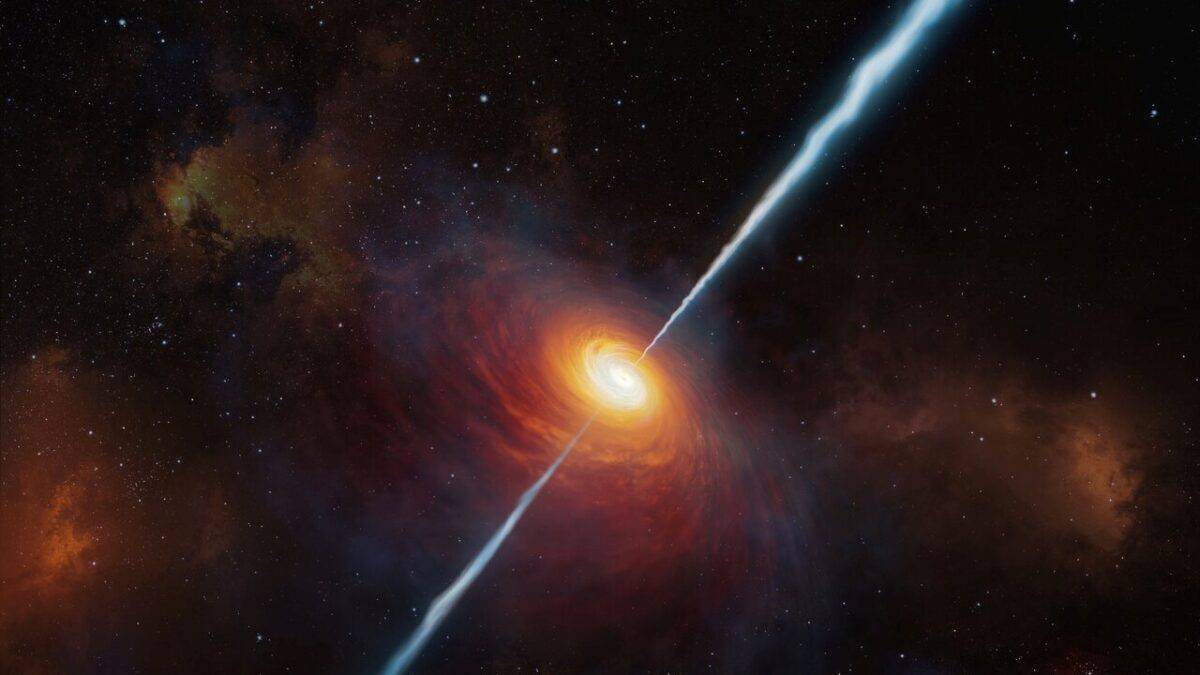 Researchers have found compacted space dust that might solve the mystery of how supermassive black holes (SMBHs) are formed. A SMBH is a black hole (BH) at least one hundred million (one with eight zeroes after it!) times more massive than our own Sun and found in the centre of galaxies all over the universe.

Since black holes are hard to see (hence the name), astronomers search for indicators. When “accretion disks” filled with high-velocity particles of dust, gas and other matter form around a black hole, the particles in the disk collide, emitting massive amounts of light. The light-emitting object is known as a quasar. So, where there are quasars big enough, there’s a SMBH.

One can imagine that it would take a lot of time to gather the material needed to make a SMBH, so it’s remarkable that they have been found as early as 700–800 million years after the Big Bang in an epoch known as the “Cosmic Dawn.”

Lead author of a paper published today, Seiji Fujimoto of the Cosmic Dawn Centre in Copenhagen, Denmark, told Cosmos that “the rapid formation and evolution mechanisms of SMBH are still one of the biggest mysteries in the modern astronomy”.

Theorists predict that SMBHs undergo an early phase of rapid growth. Galaxies forming stars thousands of times the normal rate, known as “starburst galaxies”, and surrounded by dust create a compact object “reddened” by the presence of the dust, says Fujimoto. This dust-reddened quasar “then transitions to an unobscured luminous compact object by expelling the surrounding gas and dust”.

Fujimoto’s team studied an object known as GNz7q, 13 billion light years from Earth. GNz7q was first identified in the Great Observatories Origins Deep Survey North. While some of its characteristics are quasar-like, it is not as luminous as a quasar. This suggests that it could instead be an object forming stars at the kind of rate seen in starburst galaxies.

However, using data collected through the radio interferometer Northern Extended Millimeter Array (NOEMA) in France, the researchers found a dusty veil over GNz7q. The NOEMA data suggest that GNz7q is a dust-reddened quasar exactly as described in theoretical models of SMBH evolution.

“The multi-wavelength observational properties are in excellent agreement on the predictions from the theoretical simulations and suggest that GNz7q is the first example of the transitioning, rapid growing phase BHs at the dusty starburst core, an antecedent of the SMBH at later epoch,” Fujimoto says.

In fact, the authors’ findings suggest that GNz7q is in the early stages of this transition.

Fujimoto explains: “Both dusty starbursts and luminous quasars at this epoch of the universe are extremely rare, and they are already very exciting themselves in the context of the formation and evolution of dark matter, galaxies and black holes in the early universe.” He adds that “GNz7q provides a direct connection” between dusty starbursts and luminous quasars “and provides a new avenue toward understanding the rapid growth of the supermassive black holes in the early universe”.

The authors also note that further surveys will yield more observations of objects with similar characteristics as GNz7q.

Fujimoto says that the recent launch of the James Webb Space Telescope will allow a better understanding of objects associated with SMBH creation and the underlying physics. “Webb will also have the power to decisively determine how common these rapidly growing black holes truly are,” he says, noting this will pave the way for a “new avenue to understand the rapid formation and evolution mechanisms of SMBH in the earliest epoch of the universe”.