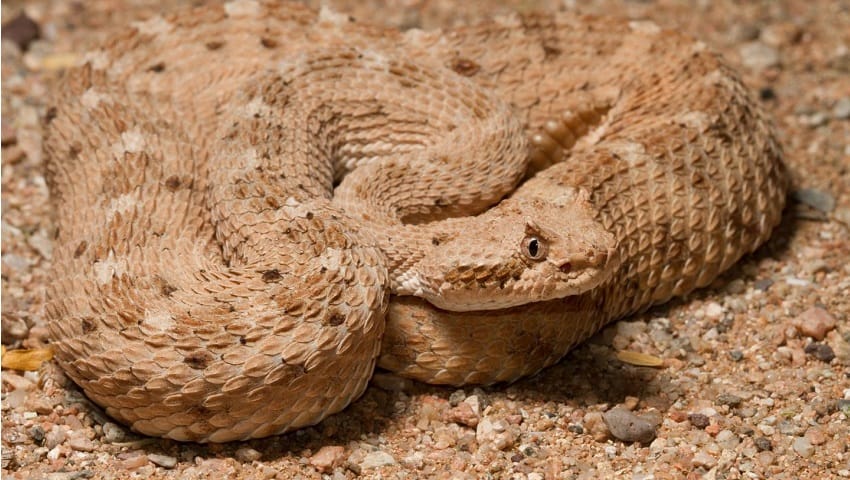 The sidewinder rattlesnake (Crotalus cerastes) is found in the deserts of the Southwestern United States and northern Mexico. Credit: Wolfgang Wuster
More on:
snakes

Physicists have long studied the unique movement of snakes, and now they have proof that there’s more to snakeskin than meets the eye.

Sidewinders – found in the deserts of North America, Africa and the Middle East – are snakes that lead their movement with the middle of their bodies, instead of with their heads, so they move sideways across sand dunes like a sine wave.

A team of researchers led by Jennifer Rieser from Emory University, US, looked at sidewinder skin under the microscope and found that tiny, uniform pits on their belly help them move efficiently across flowing sand.

This could be important knowledge for engineers attempting to make snake-like robots.

“Depending on what type of surface you need a robot to move on, you may want to consider designing its surface to have a particular texture to enhance its movement,” says Rieser.

In their paper, published in Proceedings of the National Academy of Science, the team examined the three sidewinders plus the skin of a snake that uses “slithering” locomotion under an atomic-force microscope, which shows resolution down to the atomic level.

The slithering snakes had tiny spikes pointing from head to tail, which increased friction.

On the other hand, the sidewinder rattlesnakes had mostly pits on their belly, with a few, tiny spikes. The Saharan vipers had no spikes at all – only uniform pits.

The team then created a mathematical model to test how pits or spikes affect frictional interaction with different surfaces.

They found that spikes act like the tread on the bottom of a shoe by stopping the snake from sliding around, but also help create enough friction for it to push off from the surface to start moving.

Each time the snake wiggles it’s body from left to right, it is pushing off the surface in the opposite direction, like a billiards ball moving down a tunnel.

However, this doesn’t help slithering snakes move across flowing surfaces like sand or mud.

When sidewinders move they “throw” their bellies to the side, moving it up and over the sand like a skipping rope. Because of this, the points of contact with the sand are either minimal or evenly distributed because the pits don’t push in any specific direction. As they lift themselves over the sand, they “plop” down evenly.

“The thought is that sidewinders spread out the forces that their bodies impart to the ground as they move so that they don’t cause a sand dune to avalanche as they move across it,” Rieser explains.

In addition, the sidewinders’ tiny pits means there is little to no frictional drag caused by rough bellies, making their movement across loose, moveable sand more efficient. They don’t require frictional interaction to push forward, because they are launching themselves upwards instead.

A slithering snake, on the other hand, needs to push from the surface to start; loose sand will be dislodged by a strong opposite force from the spikes pushing off the surface. Slitherers also experience greater frictional drag across the flowable sand, and are therefore slow and likely to slide around.

Interestingly, the American rattlesnakes and African vipers evolved these pits independently – a case of convergent evolution. At about 20,000 years old, American sandy deserts are much younger than seven-million-year-old African deserts.

“That may explain why the sidewinder rattlesnake still has a few micro spikes left on its belly,” says Rieser. “It has not had as much time to evolve specialised locomotion for a sandy environment as the two African species that have already lost all of their spikes.”

Originally published by Cosmos as Snakes move like sine waves