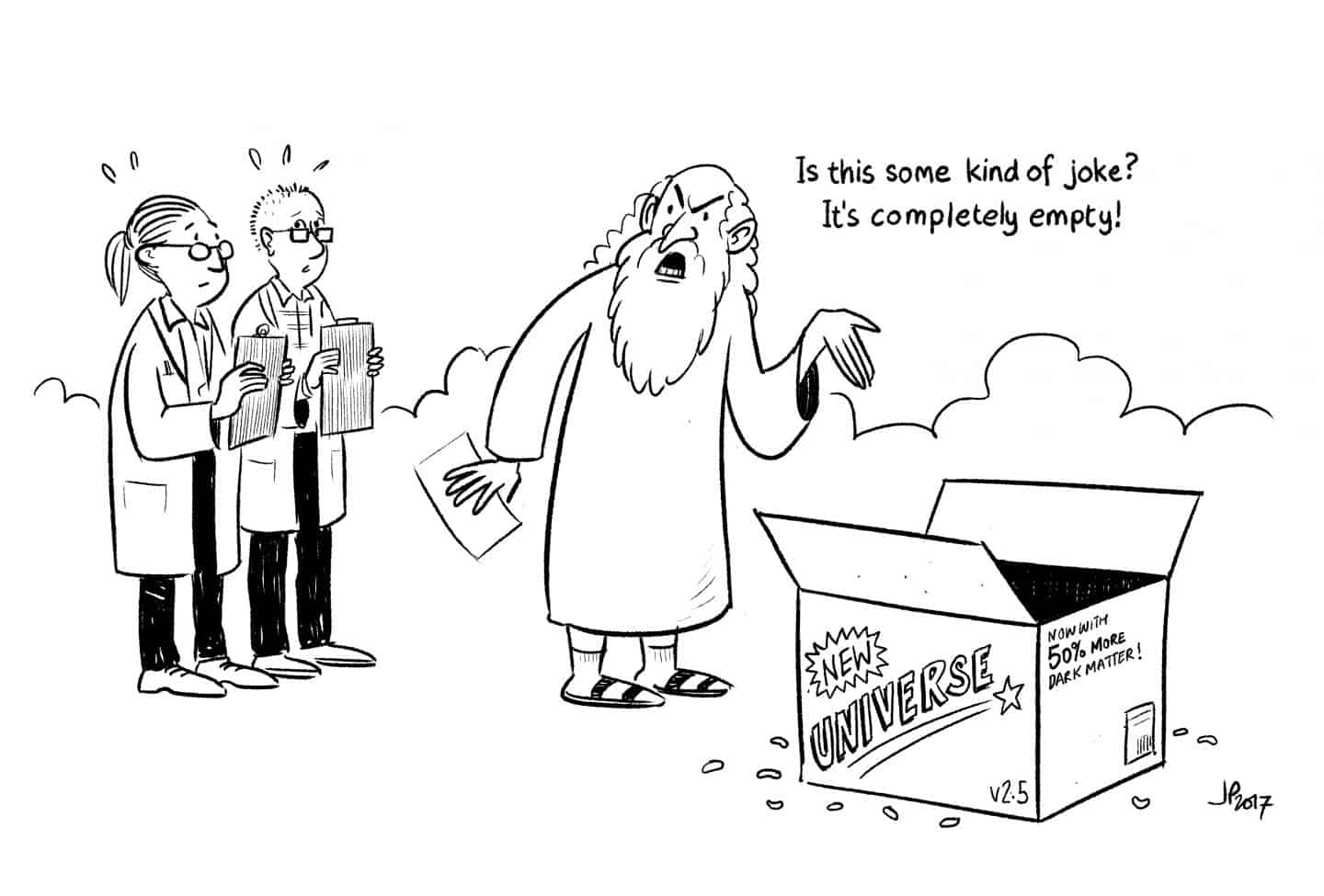 Did the Great Cosmic Designer initially intend the proton and neutron to have same mass but then threw in a bit more for the neutron as an afterthought? Credit: Jeffrey Phillips

Galileo famously wrote that the book of nature is “written in mathematical language”. It’s true that numbers crop up everywhere in the lives of scientists and engineers. But not all numbers are equal: some numbers are much more significant than others. The number of kookaburras in New South Wales on Christmas Day may be of interest to ornithologists, but is hardly of cosmic importance. A few numbers do seem to be fundamental to the workings of the universe, however, because they describe the most basic processes of nature. High on this list are the masses of subatomic particles. Dozens of particles are known to physicists, but the most familiar are the constituents of atoms: electrons, protons and neutrons. The proton is about 1,836 times as heavy as the electron; nobody knows why nature picked that particular number. The neutron is very slightly heavier than the proton, by about 0.1%, or 1.00137841887 according to the best measurements. Why is this? Did the Great Cosmic Designer initially intend the proton and neutron to have same mass but then threw in a bit more for the neutron as an afterthought?

The neutron-proton mass difference may seem trivial but it has momentous consequences, because mass is a form of energy (remember E = mc2). The neutron, as it happens, has a little more mass (and thus energy) than a proton and an electron combined. There is a general principle in nature that physical systems, when left alone, seek out their lowest energy state. Sure enough, an isolated neutron will soon, within about 15 minutes on average, spontaneously turn into an electron and a proton, a process known as beta decay. (Another particle, called an antineutrino, is also involved, but that need not concern us here because it is almost massless.) The only reason that any neutrons still exist is because, within a few minutes after the hot big bang that made the universe, some neutrons stuck themselves to protons. The strong neutron-proton binding force changes the energy balance – not by much, but enough to stabilise the neutrons.

Had the Great Designer done it the other way round, with protons about 0.1% heavier than neutrons, disaster would ensue. Under these circumstances, isolated protons would turn into neutrons rather than the other way around. Some protons would be saved by attaching to neutrons. But hydrogen, the simplest chemical element, does not contain a stabilising neutron; hydrogen atoms consist of just a proton and an electron. In this backward universe, hydrogen could not exist. Nor could there be any stable long-lived stars, which use hydrogen as nuclear fuel. Heavier elements such as carbon and oxygen, made in large stars, might never form either. Without stable protons there could be no water and probably no biology. The universe would be very different.

The fact that the universe we know, including our own existence within it, hinges so delicately on the precise value of the neutron-to-proton mass ratio has led to heated debate among scientists. Was it just a lucky fluke that the laws of physics turned out this way? Or does it suggest something more profound?

Scientists are disinclined to believe in luck, so there has been a surge of interest in the multiverse theory, according to which our universe, with its neutron-to-proton mass ratio of 1.00137841887, is but one among many. Other universes will have different ratios and possibly only a tiny fraction will contain water and stars that go on to form atoms like carbon, from which life may arise. Only in that fraction could there be observers to ponder the fact. It is then no surprise that we find ourselves in a universe where the neutron mass is so judiciously poised to permit complex chemistry and our presence as thinking, observing beings.

The foregoing argument hinges on the possibility that the masses of the neutron and proton are “free parameters” – that is, they could have been different. That seemed to be the case back in the 1950s when the critical value of the mass ratio was first discussed. However, we now know that neutrons and protons are not in fact elementary particles (unlike the electron, which seems to be). Rather, they are composite bodies with smaller particles inside them. Known as quarks, these subnuclear constituents have their own masses. There is also an enormous quantity of energy inside neutrons and protons due to the immensely strong force that glues the quarks together, and this contributes to the overall mass too (E = mc2 again!). This structural complexity makes it nigh on impossible to work out accurate values for the masses of the proton and neutron by analysis of their constituents – let alone figure out what it would take for the mass contribution of this quark or that quark to shift enough to upset that crucial neutron-to-proton mass ratio.

So for now, 1.00137841887 is just “one of those numbers” that nature has settled on for no reason humans can fathom. If the value were off just a tad, there would be no humans – Galileo or otherwise – to even attempt the fathoming.

Originally published by Cosmos as Why is a neutron heavier than a proton?