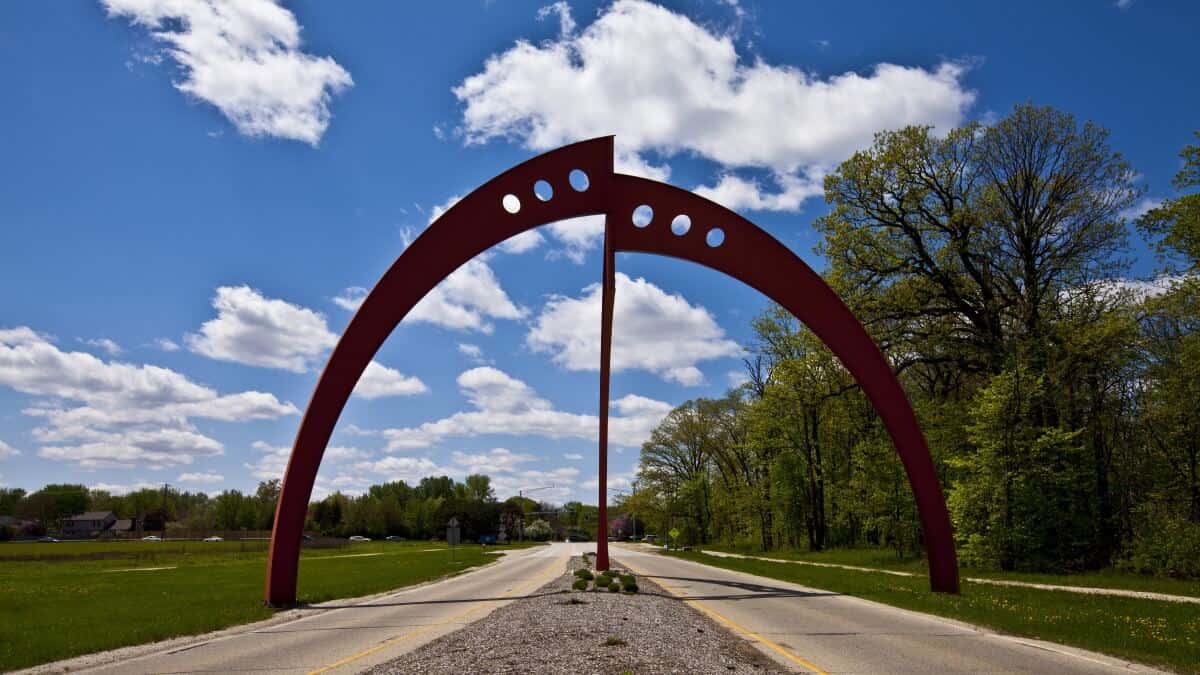 The sculpture at the entrance to FermiLab, in the US: "Broken Symmetry" by Robert R. Wilson. Credit: Raymond Boyd / Getty Images
More on:
standard model

After a decade of work, a team of more than 400 scientists have delivered an incredibly precise measurement of a subatomic particle. To some consternation, the measurement isn’t quite what the researchers were expecting: it sits “in tension” with the Standard Model of Particle Physics.

The Standard Model is (currently) our best way to explain things smaller than atoms. The subatomic particles described in the Standard Model – like the Higgs boson, protons, and neutrinos – are the fundamental building blocks of everything in nature.

This new measurement, explained in a paper in Science, concerns one of these subatomic particles: the W boson. The W boson, along with another particle called the Z boson, mediates one of the four fundamental forces of nature (the weak force).

The researchers have compiled 4.2 million W boson candidate observations to figure out its mass. These observations all come from the Tevatron particle accelerator at the Fermi National Accelerator Laboratory (Fermilab), US. They’re done by the Collider Detector at Fermilab (CDF) Collaboration.

The result – “our most robust measurement to date”, according to project spokesperson Giorgio Chiarelli, research director at the Italian National Institute for Nuclear Physics – is significantly higher than what the Standard Model predicts.

“Many collider experiments have produced measurements of the W boson mass over the last 40 years,” says Chiarelli. “These are challenging, complicated measurements, and they have achieved ever more precision. It took us many years to go through all the details and the needed checks.”

The measurements were taken at Fermilab over nearly a decade, from 2002 to 2011.

“The CDF measurement was performed over the course of many years, with the measured value hidden from the analysers until the procedures were fully scrutinised,” says CDF project member Chris Hays, a physicist at the University of Oxford, UK.

“When we uncovered the value, it was a surprise.”

The final number for the W boson’s mass is 80,433.5 MeV/c2 – plus or minus 9.4. That translates to approximately 1.4 × 10-31 kilograms; with numbers like that, it’s no surprise that physicists use mega-electronvolts per speed of light squared (MeV/c2) to describe it.

Tiny though the particle is, this number is still much larger than the expected value (80,357 ± 6 MeV/c2). While this could be bad news for the Standard Model, the researchers are keen to point out that their results need to be replicated before they can be certain.

“While this is an intriguing result, the measurement needs to be confirmed by another experiment before it can be interpreted fully,” cautions Joe Lykken, deputy director of Fermilab.

“It’s now up to the theoretical physics community and other experiments to follow up on this and shed light on this mystery,” says CDF co-spokesperson David Toback, a researcher at Texas A&M, US.

“If the difference between the experimental and expected value is due to some kind of new particle or subatomic interaction, which is one of the possibilities, there’s a good chance it’s something that could be discovered in future experiments.”

Originally published by Cosmos as Another challenge to the Standard Model: weird W bosons