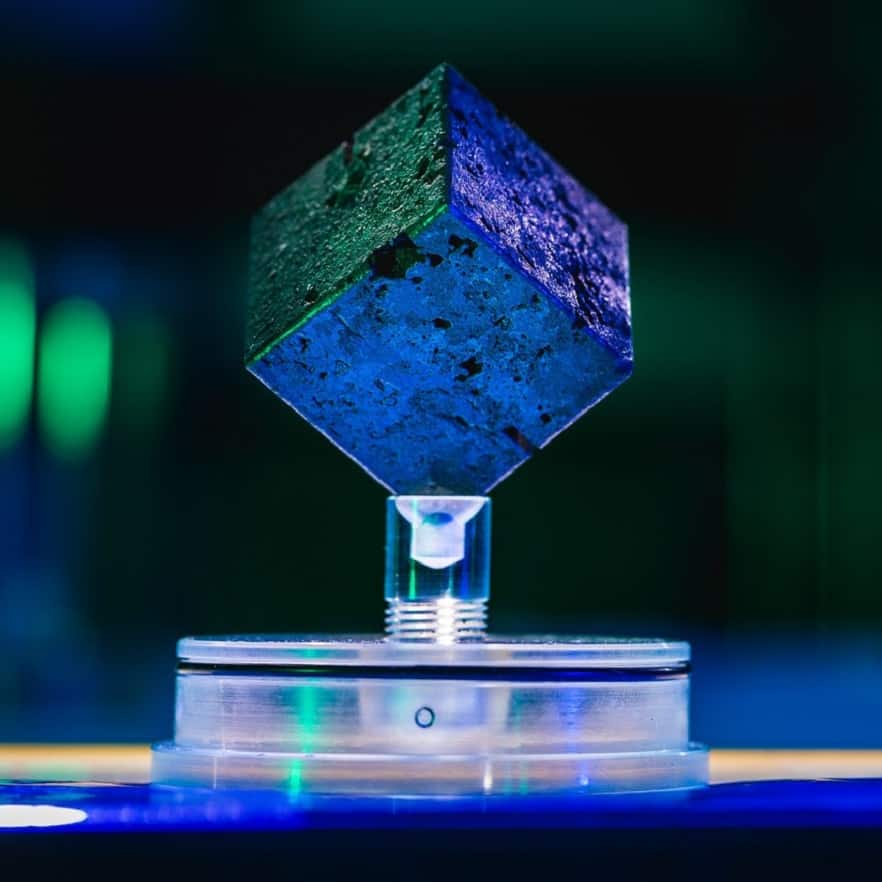 A cube of uranium originally intended to be part of the fuel load for a 1945 German nuclear reactor. Credit: John T. Consoli/University of Maryland

Two US physicists turned super-sleuths are trying to solve a World War II mystery involving two types of power – political and nuclear. What happened, they want to know, to the uranium the Nazis gathered to try to create a nuclear reactor; and in particular, how did a small bit of it find its way to them at the University of Maryland?

The investigation began in 2013, when Timothy Koeth, from the university’s department of materials science and engineering, was given a small, heavy metal cube with an intriguing note: “Taken from the reactor that Hitler tried to build. Gift of Ninninger.”

He recognised it immediately, from old grainy photos in books on nuclear history, as one of the 664 uranium cubes used in the B-VIII reactor experiment – a last ditch attempt by the Germans to have a nuclear win, even as the war was slipping away.

But as a scientist, before exploring further he had to be sure he was right, so with colleague Miriam Hiebert he used non-destructive analytical techniques and nuclear forensics to confirm the cube’s identity in greater detail.

“High-resolution gamma-ray spectroscopy of the cube showed that its composition is that of natural uranium, not depleted or enriched,” the pair write in an article in the journal Physics Today.

“Spectroscopy also confirmed that the cube of uranium was never part of a reactor that achieved criticality; it contained no tell-tale fission products, such as cesium-137.

“Both findings are consistent with what has been documented about the uranium used in the B-VIII reactor operation, which leads us to conclude that the cube is indeed an authentic one from Heisenberg’s experiment.”

Werner Heisenberg, who had won the Nobel Prize in Physics in 1932, was the best known of the scientists involved with the German pursuit of nuclear power, which initially was spread over three cities (Berlin, Gottow and Leipzig), each running separate experiments.

As the Allies closed in, in 1945, Heisenberg’s Berlin team was moved to the small town of Haigerloch in southwest Germany to, it was hoped, complete its eighth experiment (B-VIII).

Despite being almost certain they were going to lose the war, the Germans wanted “to salvage the reputation of their physics community”, Koeth and Hiebert suggest, “by being the first to achieve a self-sustaining nuclear reactor”.

The problem was – failing war effort aside – that they didn’t have enough to work with. But they could have.

The researchers say one of the most surprising things they have discovered so far is that while the 664 uranium cubes at Haigerloch weren’t enough to build a self-sustaining reactor, there were another 400 cubes in Germany at the time.

“If the Germans had pooled their resources, rather than keeping them divided among separate, rival experiments, they may have been able to build a working nuclear reactor,” says Hiebert.

“This highlights perhaps the biggest difference between the German and American nuclear research programs. The German program was divided and competitive; whereas, under the leadership of General Leslie Groves, the American Manhattan Project was centralised and collaborative.”

The twist here, of course, is that the Manhattan Project, and the immense power that it was to unleash, began as a response to fears that the Nazis were working on their own weapon.

And it’s not the only twist. Koeth and Hiebert have discovered many other intriguing aspects to the saga – and a lot more questions to be answered.

As to how their cube found its way to them, that’s a story best read in full here. And it’s a good read.

It involves cubes buried underground, Heisenberg escaping at night on a bicycle, a covert mission code-named Alsos, a box in the National Archives at College Park, Maryland, labelled “German Uranium”, a black market in uranium throughout Eastern Europe after the war, and, not surprisingly, the Soviet Union.

To date, 10 other Nazi cubes have been identified, in private and public collections, around the US.

“Each has a different story for how it arrived at its current location, though most of the stories are incomplete at best,” Koeth and Hiebert write.

“We hope to eventually trace all the cubes and their stories back to a common source.”

And who was Ninninger? A stroke of luck helped Koeth answer that one. He was poking around a second-hand book store days after receiving the cube when he came across Minerals for Atomic Energy by Robert D. Nininger, published in 1954.

The spelling was different, but a call to Nininger’s widow suggested he was the man. In 1945 he was appointed interim properties manager for the Manhattan Project’s Murray Hill Area in New York City.

It should be noted, however, that Nininger died in 2004, nine years before Koeth received his package.

Originally published by Cosmos as The hunt for WWII German uranium