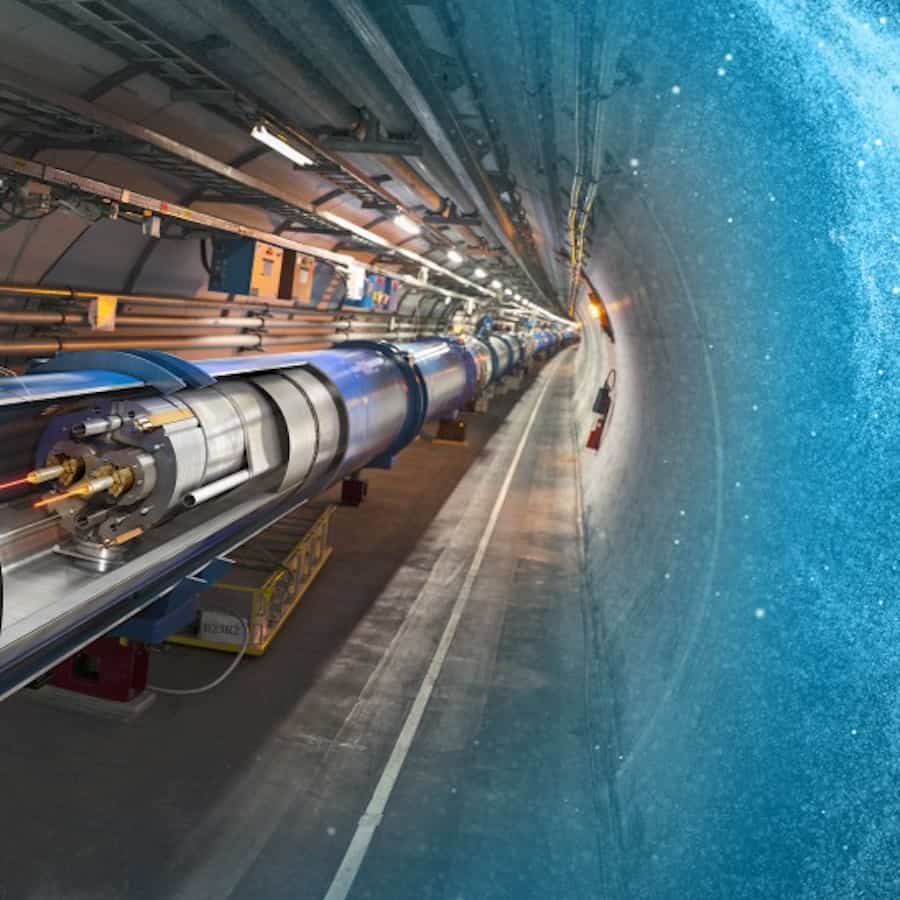 Is the Madala boson to dark matter what the Higgs is to 'normal' matter? A team of physicists thinks so – but CERN isn't convinced. Credit: CERN

Has lightning struck twice at the Large Hadron Collider? Using the same data used to discover the Higgs boson in 2012, physicists from South Africa, India and Sweden claimed to see evidence of its dark matter counterpart – a new particle the team dubbed the Madala boson.

If true, this could be groundbreaking – the long-sought-after connection between particle physics and dark matter, the mysterious ‘stuff’ that makes up around 85% of matter in the universe.

But as yet, the theory represents the views of only one research group. A draft paper on the work uploaded to the arXiv in November has, to date, received no citations by other physicists, nor has it been subjected peer-review.

It seems a revelation almost as mysterious as its subject matter.

Dark matter is five times more abundant in the universe than regular matter, yet we know almost nothing about it. We can only detect dark matter because of its gravity – the way ghostly haloes of the stuff surrounds galaxies, stopping them from tearing themselves apart.

This new particle, if it exists, would not tell us what dark matter is, but it could help explain why dark matter came to dominate the universe.

The Higgs Boson, discovered in 2012, gives mass to fundamental particle suchs as quarks. The new particle could be like a kind of dark matter version of the Higgs, responsible for giving dark matter is heft.

A team led by Bruce Mellado at the University of Witwatersrand in Johannesburg developed the Madala (a word of Zulu origin meaning ‘old man’, or ‘old one’) idea after analysing publicly available data from the first run of the Large Hadron Collider, which took place from 2009 to 2013 before the facility was shut for repairs.

That was the same dataset which unearthed the Higgs Boson, earning theorists who first proposed it the 2013 Nobel Prize in Physics. And Mellado was part of team which co-discovered the Higgs.

Among the more than 75 petabytes of data were a collection of minor anomalies. None of these were statistically significant on their own.

But like detectives looking at a string of seemingly unconnected crimes and seeing the work of a master criminal, Mellado and his team suggest all of the anomalies can can be explained by one new particle – a new boson with spin zero.

The same way a person’s sex can tell you a lot about their physiology (such as whether or not they can give birth) quantum ‘spin’ defines a lot about a particle.

The Higgs boson is an oddball, being the only known particle with spin-0. In this sense it’s neither matter nor force. Instead, it’s the mediator of a ubiquitous field that pervades all of space, and from which most fundamental particles gain their mass when they bump up against it – without the Higgs, they’d be massless.

Mellado’s team first proposed the Madala theory last year, following their initial analysis of data from the LHC Run 1. The study determined that the new boson of mass 272 GeV (or about twice the mass of the Higgs boson) could explain some observed peculiarities with a confidence of three-sigma. This equates to a 99.7% confidence level (or 0.3% chance of being a statistical fluke).

This is a much higher confidence level than was given the ‘blip’ at 700 GeV seen by both the ATLAS and CMS detectors at CERN in December, which seemed to suggest the discovery of an unexpected new particle.

As more data was collected, though, that tantalising signal turned out to be a statistical mirage and disappeared.

So far, the Witwatersrand work is unverified by other groups. Meanwhile, CERN has distanced itself from claims of any discovery, its press team tweeting:

Sorry guys, but there is no evidence so far in the #LHC data to support the existence of a hypothetical #Madala #boson

In an email, Mellado explained the CERN comments come from the natural conservatism in particle physics, agreeing that a three-sigma effect is usually not considered evidence of discovery.

“We have formulated a hypothesis,” he said. “It seems a reasonable one, in that it appears to explain an ensemble of peculiarities in the data.”

He also points out that the Madala hypothesis was not ruled out by the latest data from the LHC”s second season, announced in August.

The next step will be to scour the new data for particular signatures of Madala decay – such as the creation of 4 W bosons, which could be a telltale sign.

Originally published by Cosmos as Glimpses of the Madala boson