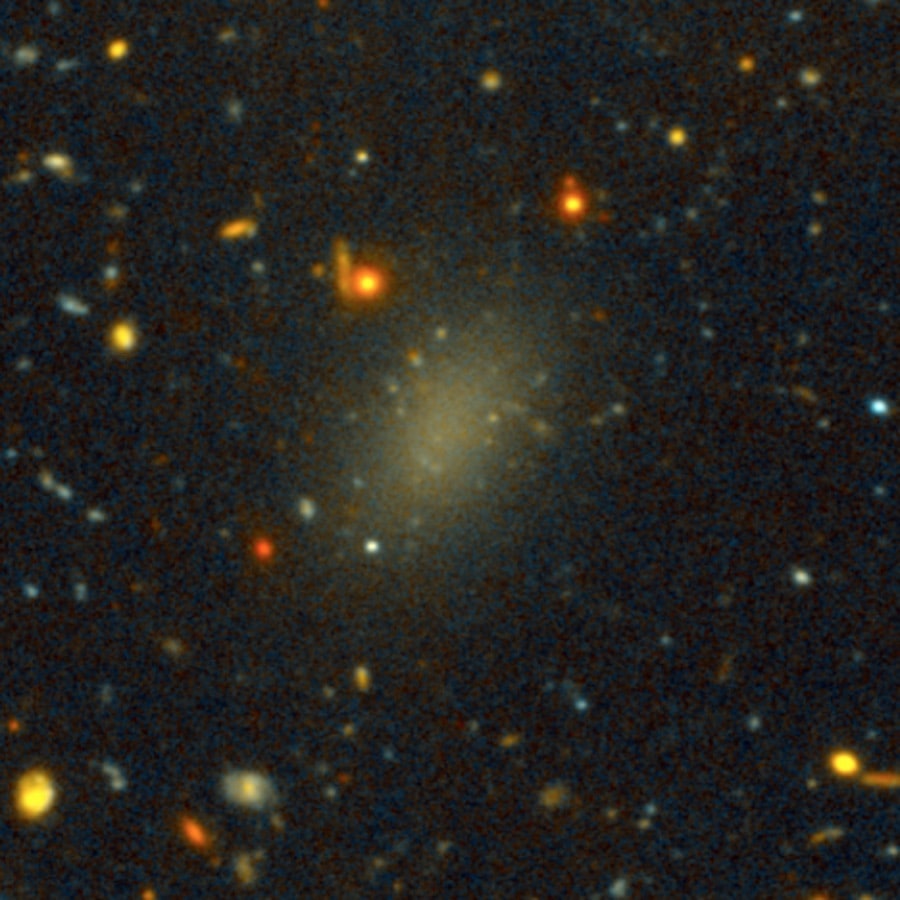 The dark galaxy Dragonfly 44. The image on the left is a wide view of the galaxy taken with the Gemini North telescope using the Gemini Multi-Object Spectrograph. The close-up on the right is from the same very deep image, revealing the large, elongated galaxy, and halo of spherical clusters of stars around the galaxy’s core, similar to the halo that surrounds our Milky Way galaxy. Credit: PIETER VAN DOKKUM / ROBERTO ABRAHAM / GEMINI / SLOAN DIGITAL SKY SURVEY

A galaxy 330 million light-years from Earth called Dragonfly 44 has been found to be made almost entirely of dark matter.

The discovery, which could help astrophysicists unpick some of the mysterious matter’s secrets, will be documented by Pieter van Dokkum from Yale University in the US and colleagues in Astrophysical Journal Letters.

Dark matter outweighs visible matter roughly six to one: it comprises around 27% of the universe while all known matter, such as stars and galaxies, only accounts for 5%. (The rest is dark energy – but that’s a different kettle of fish.)

Detecting and understanding dark matter has been difficult, to say the least, because it does not interact with electromagnetic force – meaning it does not absorb, reflect or emit light – and passes through regular matter undetected.

In fact, scientists have only been able to infer the existence of dark matter from the gravitational influence it has on visible matter.

This is why galaxies are good places to look for dark matter. Astronomers can calculate the mass of a galaxy, the sum of dark matter and normal matter, by watching how quickly its stars move as they rotate around the galaxy.

(If you want the nitty gritty, it’s the square of the rotational velocities of the stars multiplied by the galaxy’s radius, then divided by the gravitational constant.)

A galaxy with little “normal” matter but a hefty total mass indicates the presence of large amounts of dark matter.

The galaxy Dragonfly 44, first spotted by the Dragonfly Telephoto Array built by van Dokkum and a co-author Roberto Abraham at the University of Toronto in 2014, was intriguing. Its stars were whirling around at an incredibly fast clip.

“Very soon after its discovery, we realised this galaxy had to be more than meets the eye,” van Dokkum says.

“It has so few stars that it would quickly be ripped apart unless something was holding it together.”

To confirm their theory, he and his colleagues turned to telescopes on the dormant volcano Mauna Kea in Hawaii.

The DEIMOS spectrograph at the Keck Observatory measured the velocity of stars in Dragonfly 44 over six nights – 33.5 hours in total – to calculate the galaxy’s mass.

Then the Gemini Multi-Object Spectrograph on the Gemini North telescope revealed a halo of spherical star clusters around the galaxy’s core.

From these analyses, van Dokkum and Abraham’s team were able to determine that the mass of the galaxy is similar to that of the Milky Way – roughly a trillion times the mass of the sun.

But the stars and other “normal” matter in Dragonfly 44 only account for a paltry 0.01% of that mass. According to van Dokkum, this has big implications for scientists trying to find out more about dark matter.

“It helps to have objects that are almost entirely made of dark matter so we don’t get confused by stars and all the other things that galaxies have,” he said.

“The only such galaxies we had to study before were tiny. This finding opens up a whole new class of massive objects that we can study.”

The team is searching for more massive dark galaxies that are closer to Earth so they might uncover signals that reveal a dark matter particle.

Edit: the galaxy is 330 million light-years away, not 330. This has been amended.

Originally published by Cosmos as Galaxy made of 99.99% dark matter to light